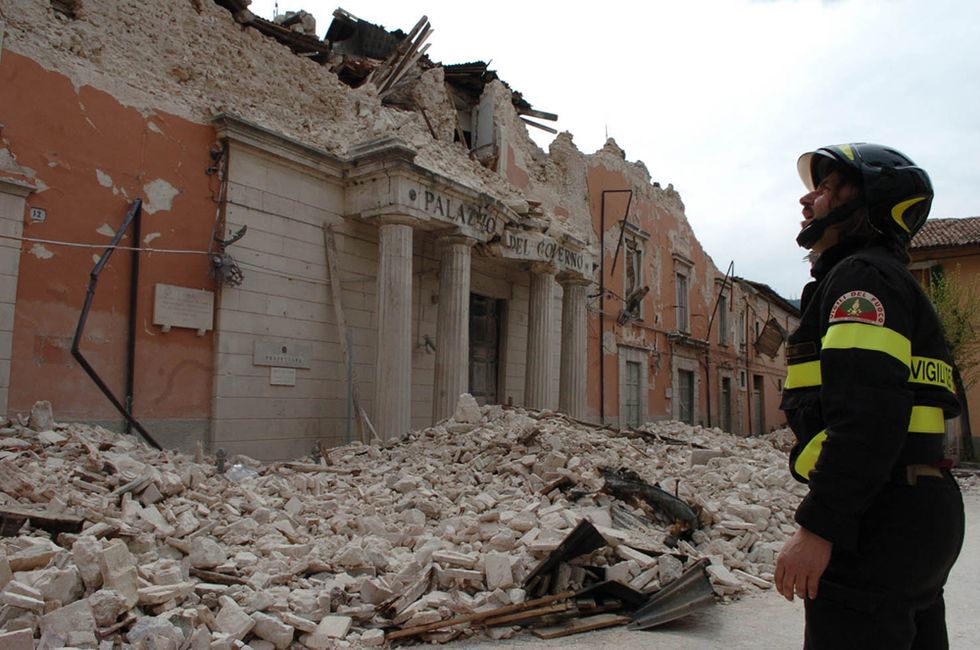 L'Aquila, Mit and visuals to remember

Four years after the L’Aquila earthquake, a completely secured historical city center waits to be rebuilt. At MIT, words and images to keep public interest on the matter alive

A photo exhibit, a book, and an impressive tridimensional website, in order to keep talking - and inspire the world to do so - about historical downtown L'Aquila and the ways to bring back life and some sort of normality to it, after the heavy damage suffered in the April 2009 earthquake. The "package", put together for the occasion, was presented at the prestigious MIT (Massachusetts Institute of Technology) of Boston in a roundtable sponsored by the Italian Consulate as part of the Italian Year of culture in the USA in collaboration with FAA the federation of Abruzzi region-related associations in the United States.

"After four years I still cannot enter my house, let alone begin restructuring works: it is simply appalling" complains Barnaby Gunning "English-Aquilese" architect (as he defines himself). As he and his wife Lucia (born and bread in L'Aquila) own an apartment right in the heart of the Abruzzo capital's historic center - and used to spend at least a third of the year there - Gunning lives and has lived first hand through the effects of the quake and the bureaucracy in charge of repairing the damages.

In part as therapy for his frustration, two years ago he set up "Come Facciamo" (how do we do it) a website that - thanks to the work of 600 volunteers, 50,000 pictures, and the collaboration of Google Earth which sent experts from Silicon Valley to teach the secrets of digital 3D design and rendering - hosts an interactive tridimensional map of the entire historical city center, complete with all the interventions made to secure buildings, accurate to the most minute details, constantly updated and free to access by all.

"It is a tool to communicate how things are," Gunning explains, "and how they could be, by helping those who might want to rebuild or incest on the reconstruction the urban context in which interventions can be made. For now, though it basically tells the tale of a place that has gone from post-catastrophe to suspended animation mode," concludes the architect, slightly discouraged and in the hope to see a little more "Anglo-Saxon efficiency" applied to L'Aquila

"Miracles cannot be performed," points out Luciano Marchetti a former vice director at he Ministry of Cultural Patrimony and responsible for most of the "plastering" as he calls it, of the enormous city center wounded during that infamous April night. "The return to normality after the 1997 quake in the Umbria and Marches regions took over 10 years and in this case the situation is much more complicated both in terms of number and concentration of damaged buildings."

While presenting "MISAQ (The Securing of L'Aquila)", a wonderfully illustrated book soon to be published, based on his own personal field experience, Marchetti praised the choice by public officials of giving priority to the reconstruction of schools and churches in order to prevent a mass exodus form the town and underlined the fact that interventions on public patrimony of historical and artistic value must be diluted over time. "If we opened every construction site at the same time," he explained, "they would be so close to each other that we would have to supply most of them by helicopter."

And to end on a more hopeful note he added: "also for the return of private investments in reconstruction we cannot be in a hurry: however, being L'Aquila a university town and intending to remain one, there are great long-term opportunities in a variety of sectors."

Yet, even supports, tie-beams and scaffoldings, if portrayed in the right way, can become art, and this time, as it is often the case, art was the trigger to discussion and debate. In fact the idea of the roundtable stemmed from the exhibit by Michele Nastasi, a photographer from Milan who originally had "portrayed the plastering" of L'Aquila for an article on "Lotus", an architecture magazine for which he is also an editor.

However, his shots turned out to be so evocative that they became an exhibition which, later thanks to curator Maddalena D'Alfonso landed in the world's most famous Polytechnic - an institution traditionally attentive to art applied to urban planning issues. Not by chance MIT reserved for Nastasi the same exhibit space that a few years ago hosted the works of the late Gabriele Basilico - another Milan photographer able like no one else, to grasp and portray the charm of dismissed industrial areas.

"Some find my pictures surreal; some say they are simply emotion-provoking; others instead appreciate their more technical aspect," said the author of the shots taken in 2010 when L'Aquila was still absolutely "off limits". "Like all artworks they can be read at different levels and most of all they trigger reflection."

"As far as my reflection is concerned," Nastasi concluded, "the suspended animation they witness symbolizes the stalemate in deciding - under the heavy shadow of a prestigious yet heavy past - what kind of city should be rebuilt. In the week I spent between rubble and beams I was under the strong impression that more than a money issue, there was an identity problem."

Thus, as writer Oscar Wilde once said, no matter if in good or bad terms, what is important is that people talk about you, or in this case L'Aquila, and its reconstruction, before other more recent and just as terrible quakes - like the one that stroke the Emilia region last year - completely buries it away from collective memory. At least on this point all those converged on MIT seemed to be in total agreement.