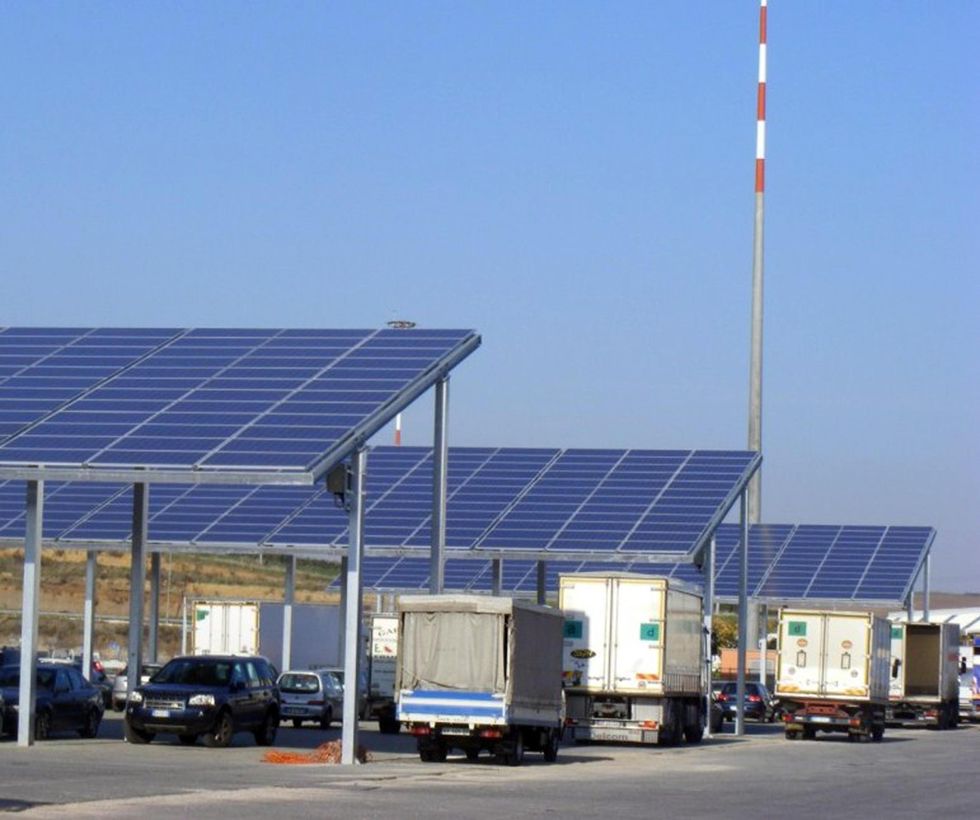 The largest solar PV greenhouse is in Sardinia

Twenty-six hectares of land covered by over 84,000 solar panels. Where roses, tomatoes and cauliflowers thrive … And this is only the beginning

In Sardinia, just miles outside Cagliari in the area of Villasor, the planet's largest solar photovoltaic greenhouse has just celebrated its first birthday. Its name is Su Scioffu, literally "the ditch", 26 hectares of land covered by 84,000 silicon polycrystalline panels manufactured by two multinationals: the Indian-owned Moser Baer and American General Electric. The panels supply energy for all greenhouse activity (irrigation, heating and lighting) without having to make use of electricity, and excess energy is channeled back into the mains.

The initiative of a group of Sardinian businessmen, Su Scioffu has already become a model and the satisfaction surrounding it, even more than in official comments, can be summed up in the words of Peppe Curridori, a Sardinian flower grower that has been cultivating roses for three generations.

In one of the four local cooperatives entrusted to him, under a solar panel-covered greenhouse, he tells us how his Venus, Dallas, Rockstar, Mignon and Luciana roses?"strains that in the open flower just 2 months out of the year?"here bloom in continuation. "In these greenhouses we have planted 10 hectares of land with some of the most delicate varieties of roses to be our pilot crop.

Thanks to the microclimate and panels on the roof, they have found their ideal habitat." Within 134 green houses fennel, celery, cauliflower, four types of lettuce, tomatoes and eggplant also grow.

A breath of fresh air for the mass distribution of produce in Sardinia which imports 80% of its products from Spain and Morocco. "In addition to guaranteeing 20 megawatts of power, PV solar energy covers the cultivation and management costs of farming cooperatives," says Marcello Spano, head of Moser Baer for southern Europe. Fresh products at km 0 arrive on the tables of Sardinian consumers at a lower price and with higher profit margins than for other farmers.

Against an initial investment of 80 million euros, the two multinationals have promised further development. Lalit Jain, CEO of Moser Baer, considers this experiment to be "an initiative that is unique anywhere in the world, also considering that just one year from its inception, the results have exceeded all expectations."