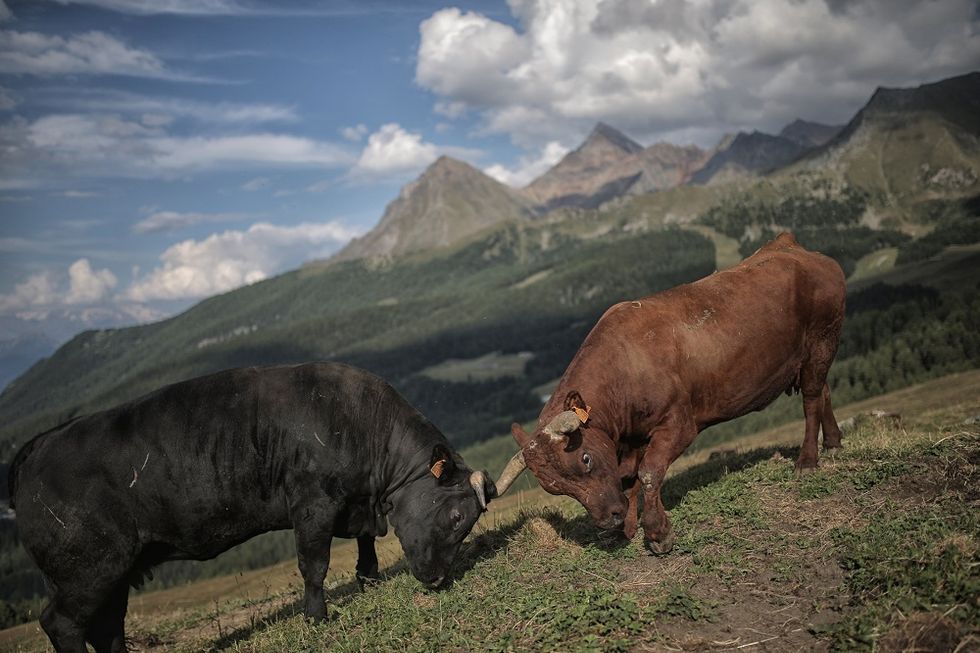 Fonduta, soups, polenta and sausages among its signature dishes

Valle d'Aosta is an Italian region where history has been influenced by mountains and national borders. Its traditional cookery revolves around the flavours of milk and cheese, meat, and the products of the land and the environment. These flavours are the essence of a harsh yet beautiful land, and take us back to the origins of the ancient civilization.

With an extremely high average altitude (much higher than that of the other Italian regions), Valle d'Aosta's culinary traditions are those of a border people, inevitably influenced by landscape and history, and by contact with the Swiss and French. The cookery is based on local products (cabbage, rye bread, chestnuts and milk), but is nevertheless varied, and uses a whole range of ingredients from further afield.

Since ancient Rome, many of the influences on the region's food have been related to its history and geographical position. For example, the closeness to Switzerland and France accounts for the region's most famous fonduta (fondue), a dish which anyone visiting the Valle d'Aosta should try. The Roman legions brought vine-growing and their culinary traditions based on hunting and the use of barley in soups. These soups - which the local people prepared with rye bread and seasonal vegetables - also abounded on the table of the lords, where they where enriched with meat stock, cheese and butter. Still today, a favourite dish is seuppa valpellinentze, a soup of white and Savoy cabbage, fontina cheese and rye bread.

The local bread has always been made in two varieties: white and black. In the past, the former was eaten only at feast day banquets and was consumed fresh; black bread, meanwhile, was prepared only once per year in an activity which involved the entire community. It became very hard, and to cut it use was made of a copapan, a type of iron knife that can still be found in craft shops.

While the discovery of America brought corn and potatoes to the rest of Europe, in the Valle d'Aosta polenta (maize porridge) was introduced only in the 18th century. Today, it is the most characteristic dish, to be enjoyed in Alpine hostelries. It evoke the tastes of a bygone age, and is served with butter and fontina cheese, or with meat and a variety of sauces.

Meat for centuries was a rarity, eaten only in winter, when the climate conditions made its conservation possible. Still today, livestock are slaughtered just before Christmas and soon afterwards restaurant menus offer a whole range of foodstuff which otherwise would be impossible to conserve, such as tetun, dried cows udder preserved in salt and flavored with herbs. The typical need in mountain areas to preserve food for long periods led to the development in Valle d'Aosta of numerous types of high quality sausages. There are also various types of dried and cured meat, such as the salted beef which is at the basis of the typical regional dish, carbonade; also unforgettable is lardo di Arnad, cured belly porked flavored with herbs and spices.

Those who are interested in visiting Valle d'Aosta should not miss its famous coppa dell'amicizia ritual (the "cup of friendship", with a number of drinking spouts arranged around its circumference). Passing from hand to hand, the "coupe de l'amitié" gives everyone a portion of "caffè alla valdostana" (made by mixing scaldingly hot coffee with grappa, red wine, sugar and lemon zest), making sure to make enough to allow the cup to be passed round a good few times. Each time you are likely to drink from a different spout, and this gives the ritual that touch of intimacy which helps create a friendly atmosphere.