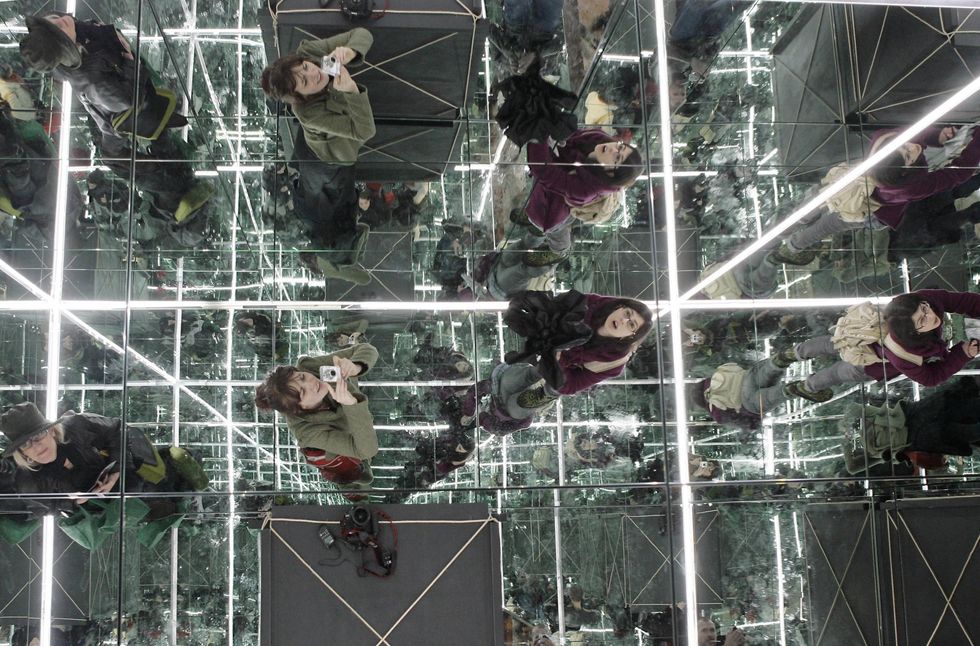 The shapes of sound on exhibition

Shape is sound and sound has shapes.

Many artists currently holding exhibitions are convinced of this.

Although their most famous pioneer, Wassily Kandinsky, could only imagine the music his abstract painting wanted to emulate, in the Fifties the roles were switched, and a composer like Iannis Xenakis wanted to create music the way an architect designs a construction (all musicians do it, but he took the commitment literally, even collaborating with Le Corbusier), or another, like John Cage, divided the world in two, on one side were all the silences, on the other all the noises made by objects.

Since then, notes, rhythms, rumblings and rustlings occasionally break into the visual arts and violate their muteness.

This is what happens in the exhibition organized by Achille Bonito Oliva at the Music Park Auditorium in Rome, entitled "Forte piano", when shape becomes sound.

There is Cage, and with him artists like Nam June Paik, Gino De Dominicis, Vito Acconci, Jan Fabre, Donatella Spaziani.

They were there until 10 July, because after that the second round of the exhibition will start (from 19 July until 31 October), with Joseph Beuys, Yoko Ono, Michelangelo Pistoletto, Mario Schifano, Bianco and Valente, just to mention a few, considering that the there are a total of 80 names in the list of exhibitors.

They will form a sort of orchestra, scattered throughout the complex designed by Renzo Piano, not just in the halls and lobby, but also outside, in the corridors, in the bars, along the staircases, in the rest rooms.

In Ascona, Ferruccio Ascari is having his own show.

The artist, born in 1949, who is also an expert in Indian philosophy and yoga, is presenting his works at the modern art museum in that magical town which, at various times, has been visited by hordes of anarchists (foremost among them was Michail Bakunin), theosophists, dancers, expressionists, poets and writers of the caliber of Rainer Maria Rilke, Thomas Mann, James Joyce and Hermann Hesse.

Still drawing spiritual energy from Monte Verità (literally Hill of Truth), the exhibition is entitled Materia inquieta (Restless Matter) and will run until 16 September. Ascari measures space, extracting the sound equivalent from it; he elevates sculptures in cement and metallic mesh in the air of the main room at the museum.

He does this also with old pieces of furniture «played» like musical instruments: at the beginning of September at the Teatro San Materno in Ascona, audiences will be able to see and hear Vibractions, the sound installation that Ascari created in 1978, the same performance that, on 29 June, also ended the exhibition of the artist organized at Spazio O' in Milan.

Milan will also be the location (at Palazzo Reale and the church of San Gottardo, until 23 September) of an exhibition by the Scottish artist Susan Philipsz (Glasgow, 1965).

Here, at the peak of purity and dematerialization, Philipsz manipulates and expands only notes, so that the sound transforms the places and we who pass through them. It reshapes the spaces and stirs memories, even painful ones.

The artist (who won the Turner prize in 2010) not coincidentally presents a haunting work at Kassel, for the current edition of Documenta (until 16 September): on the tracks of the railroad station in the German town we can hear music playing - it is the Study for Strings, written by Pavel Haas in 1943, in the concentration camp of Terezin.

The Jewish composer was deported along these very same tracks, and died in Auschwitz in 1944.