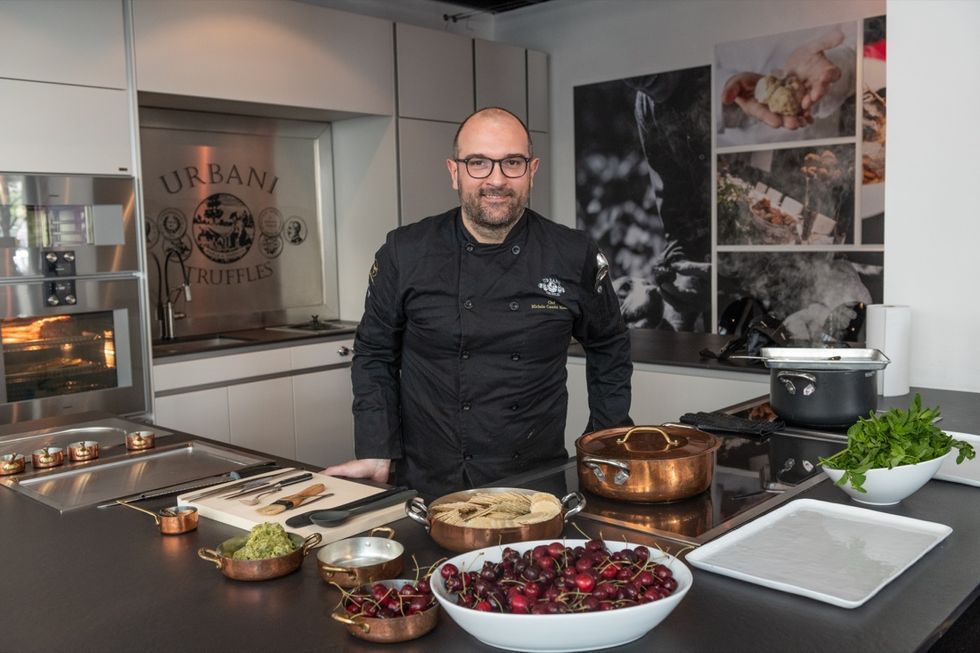 A truffle zabaglione, strictly without sugar, to softly embellish a cut of rib cooked at 550 degrees to imprison inside moods and flavors; a "Genoese" Neapolitan style, a sort of white sauce made of onions, celery and carrot, to dress a perfect pasta, rigatoni of course; and then courgettes with quinotto and mint, mostarda mantovana, anchovies and artichokes and petals and much more: Michele Casadei Massari delighted the guests of "This is Italy", the New York format of the Panorama of Italy, currently underway in Manhattan.

Born in Riccione and raised in Bologna, a city to which he remains deeply attached, he has been working in New York for years. Founder and executive chef of Piccolo Cafe in New York, which today has four restaurants, he has recently opened the restaurant Lucciola of which he is executive chef.  And now a culinary "signature" among the most famous in the world. His event was hosted in the magnificent headquarters of the Urbani Truffles, in 10 West End Ave in New York. A blaze of flavors and quality, popular throughout the Big Apple.

The now famous and international executive chef has lent his services to numerous top brands in the world of Italian fashion, automotive and design and more. And currently he is also executive chefs at Ferrari North America. Among his many collaborations, in the artistic and cinematographic field, he is executive chef for the Biografilm Food Accademy and also a film producer patron of the Bologna Film Festival.

The name and theme of his show-cooking were dedicated to the marriage of meat and gold: "Meet Gold", playing on the assonance of the pronunciation of "meat" and "meet". In fact, the various recipes proposed the combination with micro-dust pure gold, as well as naturally with the authentic vegetable gold that is the truffle.