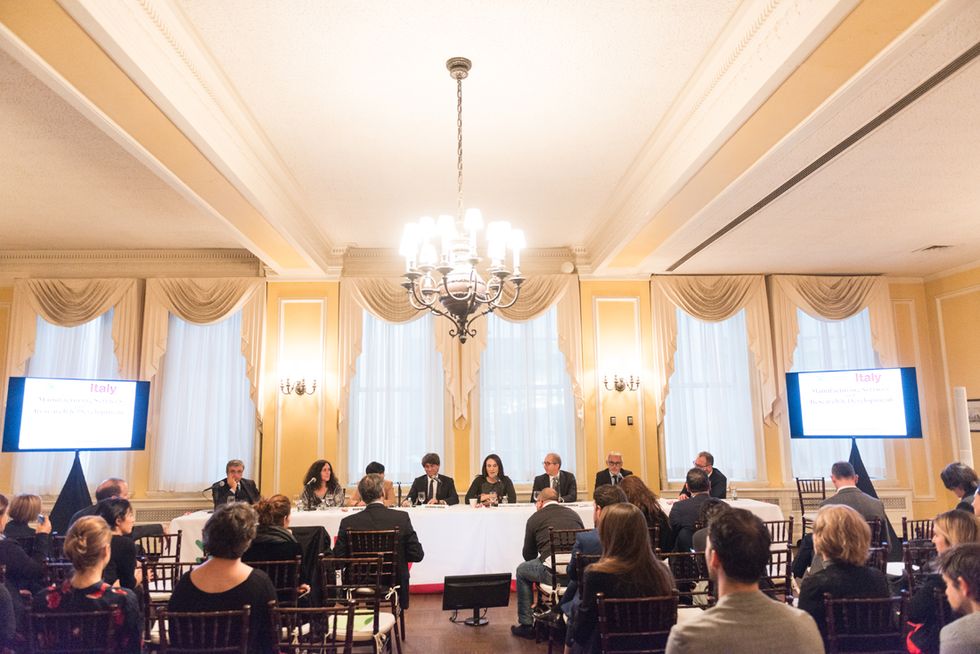 The Italian manufacture that conquers America

At the first workshop organised in New York by Panorama, great business histories with local roots and global expertise

Today the Jeep Renegade is turning for American highways, but it is produced in Naples and arrives in the United States on board Neapolitan ships ": it is a happy example of what Costantino Baldissara, commercial director and operations manager of the Grimaldi Group, chooses to indicate the very close relationship that already exists, and therefore it can only develop further, between some Italian excellence and the U. S. market, where however some" parts ".

This is precisely what we at Panorama have proposed to do with This is Italy,"explains Giorgio Mulè, director of the magazine, opening the first of the four workshops that illustrate to the New York public the reality of those who embody the great Italian skills to assert themselves in the world:" We asked ourselves what to do again to promote Italian culture in the U. S. but not only, also the know-how, Italian skills. Here we are, to present to us the great company stories that tell the best of Italy on their own ".

They tell us how the local and identity roots of a company (and after all, the workshop headquarters, the Downtown Association, one of the oldest club houses in the United States that represents the roots of New York) can make new and different and above all global fruits sprout.

Large companies such as Lamborghini, which three different foreign properties, last among which the current and definitive Volkswagen, have wanted to leave autonomous and identity, as explained well Alessandro Farmeschi, Coo of the group in the States:"And today the very high quality that has always distinguished our cars is on the eve of joining in a new way with the size, because with the SuperSuv Urus from next year we intend to double the number of

If Lamborghini is in Sant' Agata Bolognese, not far away - in Borgo Panigale, also in the Motor Valley - there is Ducati, also a Volkswagen group, which is 101% Italian company for its skills, research and manufacture:"We create special products", said Francesco Rapisarda, Ducati communications director,"A Ducati is not only a very beautiful and performance bike, a Ducati

A lot of identity, however, must be nurtured with a training that is up to the challenge of never allowing it to be dispersed: a training represented at the workshop table by the Rector of Bocconi, Gianmario Verona, who summed up the very strong reasons why the Milanese university represents an Italian excellence recognized throughout the world.

While the councillor for training, education and work of the Lombardy Region, Valentina Aprea, stressed the importance of the very strong link in Lombardy, thanks to the work carried out by the administration, between the worlds of school and business:"Since 2013 in qua", he said,"we have always continuously strengthened the Lombardy training channel, focusing a lot on the alternation between school and work, active learning and problem solving, with particular attention to We will amaze you again!

Digital transformation "represents a challenge for Italian excellence but also a great opportunity for the Rector of Bocconi," because it has a cross-cutting impact on all economic, production and other activities. In all areas of economic activity, one has to deal with big dates, for example. But our commitment is to ensure that our students acquire the fundamental competences of the dark subjects as a presupposition to then vertically deepen the new specialist skills indispensable for our times ".

Fulminea but the synthesis of Michelle Caruso Cabrera, the American journalist who moderates the workshop is correct:"In short, Italy is a perfect place to create high quality products and high margin". The future is built ", Mulè concludes," keeping our roots in Italy firmly fixed, but opening our minds to a vision and action.