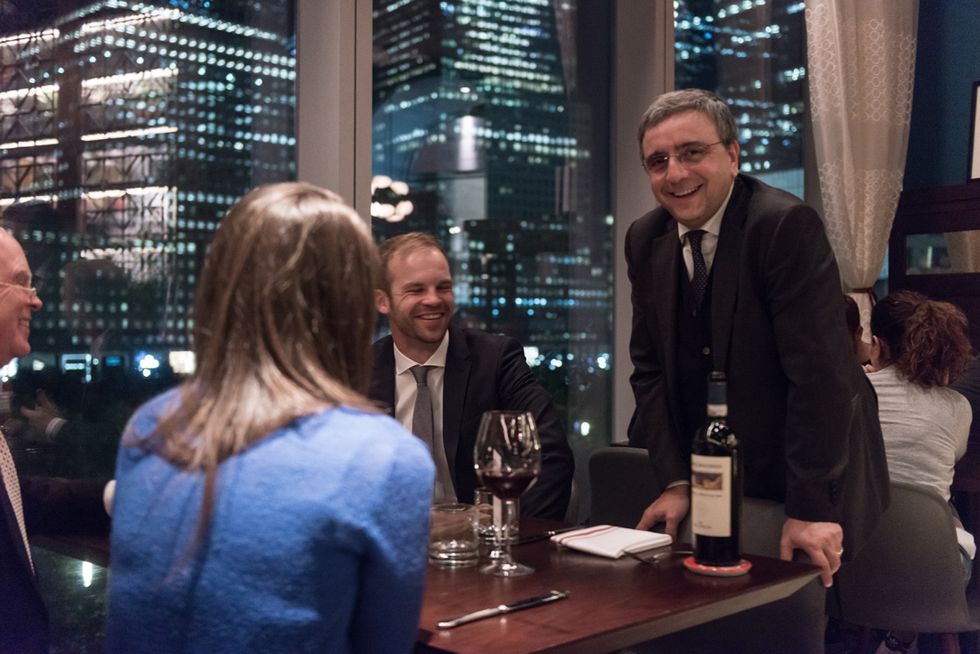 Who are the men, women and companies that received this Is Italy - Parts Unknown award at the Harvard Club in New York

Italian excellence will be on stage at the Gala Dinner organised by This is Italy, Parts Unknown at the Harvard Club of New York. A real triumph of Italian success meant to prove the many opportunities that our country can offer to its foreign partners.

Business, food, but also fashion and politics, these are some of the area the people that will be receiving the prestigious This Is Italy award come from. Talents the whole country is very proud of.

Costantino Baldissara will be awarded for promoting Italian business excellences internationally. Mr Baldissara represents theGrimaldi Group, a company founded in 1947 that with its 120 ships connects every day 110 ports in the world. Thanks to acquisitions and development projects Grimaldi has helped to create the Sea Motorways in Europe, both in the Mediterranean and in the Baltic Sea. Thanks to the latest technologies, today it is one of the youngest, most modern and environmentally sustainable fleet of the world.

Roberto Maroni,Governor of Regione Lombardia, will be awarded for promoting Italian excellences in public administration internationally. Thanks to Mr Maroni and the best practiced he implemented in the environment, tourism, health and welfare fields, Regione Lombardia has become the third richest region in Europe. Today, Milan is a modern city and future-oriented, the true capital of Italy.

Gianluca Isaia will be awarded for promoting Italian style internationally. Isaia reflects the essence of Neapolitan sartorial tradition since 1920, today re-interpreted in a contemporary way. Mr Isaia represents the third generation of a company born in in a very small town close to Napoli, named Casalnuovo, known as the "town of tailors", and he is the one who succeeded in turning the classical company into a contemporary one, able to bring its unique tailoring tradition to a new stage. Thanks to the quality and attention to details, to the originality of shapes and colors and to the use of fine fabrics, today Isaia is one of the leaders of the Italian and Neapolitan hand made in the world. In recognition.

Stefano Bonaccini will receive the Politics award. Mr Bonaccini is the 9th President of Regione Emilia Romagna. A vibrant and energetic land in the Center East of Italy, home to the world-renowned culinary excellences, leading automotive brands, med-tech & pharma clusters, boasting 40,000 manufacturing enterprise. Mr Bonaccini will be awarded for leading the Emilia Romagna region steadily and effectively through the severe and long economic and financial downturn to a +1.6 GDP growth in 2016, achieved by lowering unemployment and boosting exports, and for his relentless focus in fostering and nurturing the US Italy relationship.

Reginald van Lee will receive the Humanities award. Mr van Lee is a philanthropist, an arts advocate, and a very successful Senior Partner at with Booz Allen & Hamilton. He was appointed by President Obama to the Board of Trustees of the John F. Kennedy Center for the Performing Arts and to the President's Committee on the Arts and the Humanities. This is Italy, Parts Unknown has praised Mr van Lee for delivering on his journey to purpose and his relentless support to the arts and other aspects of communities in which he has believed.

Chef Vito Mollica will be awarded for promoting Italian food excellences internationally. Chef Mollica has brought Italian cuisine flavors to the world, with a unique combination of tradition and international style. Appreciated by heads of state and celebrities for its remarkable creations, his restaurant is a must for anyone who wants a touch of authentic Italian character in the pot. Ambassador of the best Italian products in the world, "Don Vito" personally selects every single ingredient to bringing the excellence of our country in the dishes from around the world.

Antonello Montante will be awarded for promoting italian manufactoring internationally. Mr Montante represents Eicma, the oldest and the biggest exhibition of two wheels industry of the world. Since its first edition in 1914, Eicma and the city of Milan, together with Italy, have boosted a vision of present and future which confers prestige and shows two-wheel vehicles as the protagonists of a new concept of mobility, as well as continuing to inspire a strong deeply-rooted passion. Last edition, with more than 600.000 visitors and 1143 exhibitors from 41 countries confirmed Eicma as a worldwide benchmark for the sector of two wheels.

Tommaso Dragotto will be awarded for promoting the Italian entrepreneurial skills combined with the environmental sustainability. He represents Sicily by Car, and he is a self-made man who in little more than 60 years has managed to create the largest group of car rental in Italy, starting from only two cars. With over 20,000 vehicles, Sicily by Car is now a point of reference worldwide for reliability, courtesy and assistance. From deep love for his land and thanks to his ability to imagine the future, it is born the first regional electric car circuit in Europe that allows you to explore whole Sicily through its 5,000 years of history, art and traditions.

Tenor Vittorio Grigolo will be awarded for being world ambassador of Italian arts and cultural tradition. Tenor Grigolo made his opera debut when he was only 13 years old, alongside Pavarotti himself. When the great tenor signed little Vittorio's autograph book, he wrote "A Vittorio Primo," a blessing of sorts that foretold the younger singer's rise to greatness. From La Scala of Milan, to the Metropolitan Opera of New York, Vittorio has become the "Voice of Italy" in the world, thanks to a unique mix of talent, genius, professionalism and charisma.