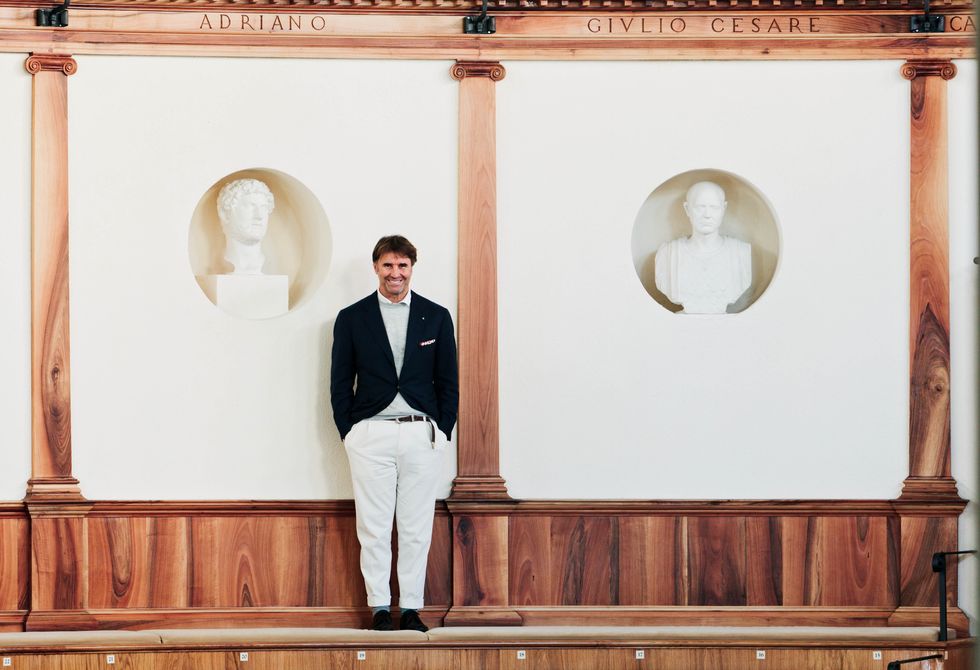 My philosophy of profit

Luxury is not for everyone, but everyone deserves to live with dignity. Brunello Cucinelli tells us how a company can grow by paying its workers better wages. And why he decided to quote his company

«We have a three-year company plan and we also have a 300-year plan. That's important too. Here it is». Brunello Cucinelli says this in front of the Renaissance theater he had built at his headquarters in Solomeo, Umbria. He tells this to his guests when he gives them a tour of his offices and woolen mill.

He has said it often in recent months to the potential investors who should accompany this extraordinary example of Italian business to the Stock Exchange next spring. This is a company that, since 2009, the year of the crisis, has increased its staff, sales (+18% in 2011), profits (+62% after doubling them in 2010), investments (+100%, about 15 million euros) continuing to open stores all over the world.

Signor Brunello, as everyone calls him, inside and outside the company, does not seem to be stressed by this overwhelming growth. At 58, he looks like a satisfied, easy-going man who remembers the wise ethical lessons of his hard-working father, a simple laborer, and those of his mother, who worked at home for Luisa Spagnoli, and who listens to the hints that reach him from his twenty-year-old daughters.

The international press has dubbed him "Prince of Solomeo", emperor of cashmere, humanist entrepreneur. Long ago it decreed his company one of the global luxury brands. But he spends as much time as he can in his tower-office, a large, sunny room whose walls are covered with the portraits of his many heroes, from St. Benedict of Norcia to Gandhi, from Aristotle to Kafka.

This is where we interviewed him to understand how he was able to achieve such success in these difficult times, in accordance with a business philosophy that would seem impossible while the world economy is spiraling out of control.

For Cucinelli, place is important, indeed, fundamental. «If this company had been in an industrial zone, it wouldn't have been the same. You see those sheds? We have initiated a project with the authorities to plant as many trees as are necessary to hide them. We can and must always do as much as we can to improve our landscape. It enables us to live and work better. It fosters creativity.

Absolutely! When the crisis began in 2008, I gathered the employees and I told them: for 18 months I won't dismiss anybody, but I ask you all to be more creative. Every day. So when one of the cleaners saw a suitcase with the autographs of famous soccer stars that I keep in my office, she suggested that we make a cashmere soccer ball. Which we did, as a promotional gadget.

You built this company from nothing. Now you plan to quote it on the stock exchange. Have you thought about your two daughters?

You can't inherit a company, you can only inherit ownership. Camilla, 29, and Carolina, 20, are already involved with the production. They will have time to demonstrate what they know how to do and when the time comes they will find a company that is stronger and better structured.

Yes, but having the company quoted changes the rules of management of a family company. The shareholders demand results and a different kind of management.

I know that. The Stock Exchange does not always work out well for luxury companies where craftsmanship and creativity are involved, and have to be used sparingly. The Stock Exchange forces you in an entirely different direction. But by spring we will be ready, and if the market is willing, we will list 30-35% of the company. In Milan, because I'm Italian.

Why did you decide to take this step?

To gain greater visibility, to attract managers of quality more easily here to Solomeo. To have the feedback of my investor-partners, who see things a little differently from me; to have a more capitalized company andnew resources for growth. And then there's my age. I think quotation on the stock exchange can prolong a company's life, at least by a few decades. Then, if my daughters show they're able, it will be up to them to carry on the business.

Don't you fear domination by the financial world, its methods and ways of thinking?

I've never been in finance but I hate to see it made into a monster. We have to live in respect of one another's roles. It is not enough to have more money, you have to govern your growth.

You speak of growth at a time when the economy is sliding toward a recession. Aren't you worried?

Sure, but I'm not worried about who will buy my products. I ask myself: how will our industries find and keep young employees capable of doing manual labor?

What will they have to do?

The logic of profit has to change. I strongly recommend reading A Global Ethic, a wonderful book by the Swiss theologian Hans Küng. Making profits with dignity is not only possible, it will become essential. In the last several months a dozen Italian investors have come to see me. I've tried to explain the company to them beyond the figures, and they've all told me: you have to go on the stock exchange to prove that it is possible to make profits ethically.

What does it mean to make profits ethically?

It means thinking first of the company, then of Brunello, then of those who work for the company and of their earnings, then of society. My father was always intolerant of injustice and bullying and always told me: you'd better be a good person, or else!

The world has changed. My father, who is 90 now and has been retired for the last 30 years, didn't know anything about his boss. When I interview twenty-year-olds to persuade them to come and work here, they know everything about me. It isn't just a matter of being a good person. It's simply that you can't fool people. Young people gather information and they have ways to find out what they want to know. And ways to react. So I have to offer a nicer place, a few euros more and give them the feeling that together we can do something good for everyone.

Is it possible to pay more for manual labor?

It's possible. A sweater that comes out of the factory costing 350 euros and goes on sale at 1,000 on via della Spiga in Milan, has a cost in terms of pure manual labor of 60 euros. If I pay 100, we can certainly find that other 40 euros in the space between 350 and 1,000. Maybe just one less company dinner... With this reasoning, all my employees have a pay that is 20% higher on the average than the pay foreseen by the contracts.

You make it sound easy...

But it isn't. When a girl goes to the discotheque on Saturday night she's ashamed to say she's a dressmaker or a knitter. She prefers to say she works in a call center. We have to restore dignity to manual labor. If we lose that ability we lose everything.

How do you manage to hold onto it?

Here in the company we offer paid six month internships. Employees work from 8 am to 6 pm. We have our own cafeteria but 60% go home to lunch. There are no time cards to punch. I am strict but kind.

Are there any other businessmen and managers you admire?

I like what Diego Della Valle is doing. I ask Andrea Guerra (managing director of Luxottica, ed.note) for advice every chance I get. He is the best manager I know.

Luxury is quality and it is not a right for everybody. A good product sold in extraordinary places is not luxury. We make 50 prototypes a day but only 10% become part of collections. There is a great deal of creativity and attention to fashion trends. I'd like our products to appeal to Europeans and Americans, to prevent the risk that in my opinion many Italian brands are running: of becoming subject to the influence of Russian and Japanese tastes.

What effects has the crisis that began in 2008 had on your company?

Between 2010 and 2011 we structured the company for the next five years. The year that just ended was the first year of a new world.

Everything and nothing. Since 2010 the American buyers are demanding a beautiful product, made well and delivered on time. They used to ask the price first, but not any more. Neiman Marcus concentrated its strategy on luxury. This is a good opportunity for a "Made in Italy" label.

How are things going for products "made in Italy" in general?

They're going well. At the last fashion shows a few journalists asked me: aren't you worried about the situation in Italy? No, I answered. There are lots of fine, honest people, a myriad of wonderful industries, we are second only to Germany and we can be competitive when we want to. The label on the product? That problem will always exist. The brand makes the difference. If you play any tricks you'll be caught. But if the market doesn't punish you that means it's not important. I am not scandalized by a certain business model that calls for Italian creativity and production abroad.

I see a wonderful future ahead, which I didn't see 15 years ago. I understand the protests of the indignados and I think we should have the courage to listen to the young, because there is some truth in what they say. But we have to go beyond that and combine illuminism and romanticism. There are billions of new consumers out there. We have to work better for them.

As we are leaving, Brunello Cucinelli gives us a biography of the humanist philosopher Montaigne, with its meaningful title: How to Live.

Following the thread of growth

Since 2009, the year the crisis began, the turnover and investments of Cucinelli have been growing. Even the forecast for 2011 is positive in double digits.