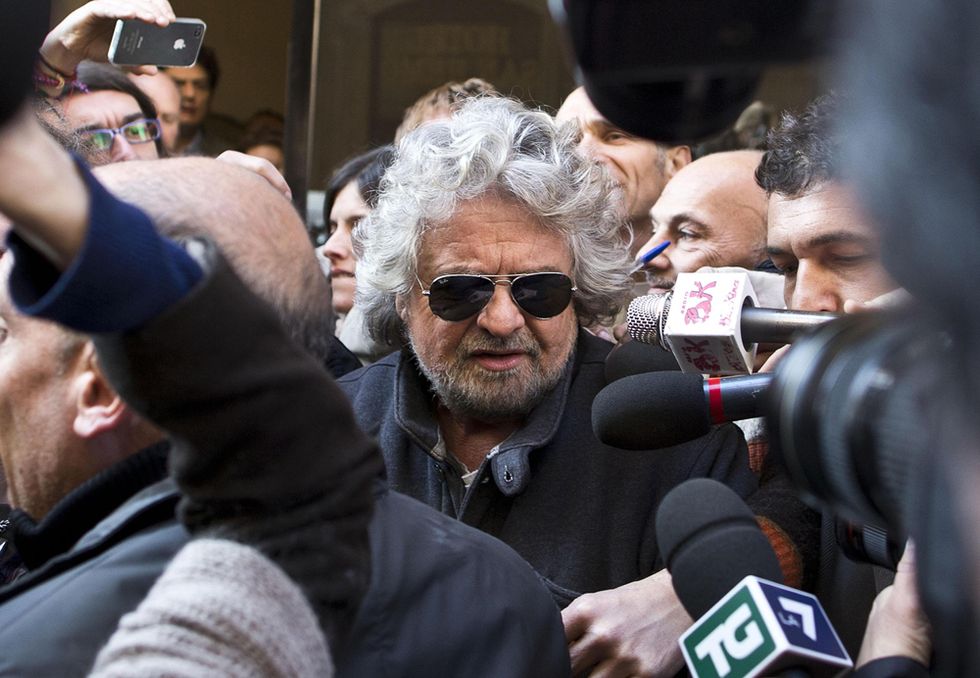 Beppe Grillo insults the Center-Left, derides the Center-Right and leaves the political scene in shambles. While launching his own utopian proposals which, if implemented, would send government coffers into a tailspin

The tweet by creative director Pietro Brunetti just about sums it up: "It's great living in a country where the morning after, everyone is there asking themselves, 'who the f*** did I vote for', like picking up someone in a discotheque when you're drunk." An up yours, short and sweet, to Beppe Grillo and even a polite one compared with the tens of thousands of negative comments that flooded the social networks, reflecting Italian concern about the Movimento 5 Stelle (Five-Star Movement M5S). Something absolutely new, this mass criticism online: the most alarming test for someone who bet everything on the internet. And even much more.

As the Italian national anthem says, Italy has awoken. Or at least seems to be waking up from the sleep of reason that generates political monsters. On March 3 and 4, the live streaming of the tragic/comic meeting of these citizens-elect, otherwise known as the "X Factor of 5 Star members of parliament", made the weakest part of the "grilloist" movement?"its citizen-voters?"blanche. Unfortunately, for them, this is just the beginning.

Even if it's true that the part of their electoral platform limited to financing for political parties is perfect and immediately implementable, the rest of the M5S proposals seem right out of a dream. Or, better, a nightmare. The truth is that, during campaigns, facts and figures mean nothing. The average voter makes his or her decision based on other criteria: candidate appeal, providing voters with a dream as an antidote to grudges, anger and fear. By the eve of the election, Beppe the "Politico-Comic" had played his role to perfection. Except he won too big and now, theoretically, he would have to live up to the expectations of those who voted for him by accepting a role in governing. But Grillo has no choice but to pull back in the face of his proposals that any accountant could tear apart in five minutes with a dime store calculator.

The proof? Just take a look at the numbers published here: certified madness. For example, reducing the work week from 37 to 20 hours per week would cost roughly 162 billion euros, while the universal living wage for all those without work would call for more than 170 billion euros. And the solution for public debt? Solved by delaying payments and the unilateral modification (i.e., not agreed on with creditors) of interest rates?"actually very close to default. The same oversimplified approach is also applied to IRAP, the Italian regional production tax and the one most-hated by SMEs. Don't like it? No problem, we'll just get rid of it and who cares about where tax revenues will come from. Simply put, it takes a lot of nerve to define as a program a list of things that would cost Italians hundreds of millions of euros. It's actually more a smoke screen for the gullible. Something to be rejected out of hand as clearly incompetent.

This is also why Grillo pulls a disappearing act with Italian journalists, behaving even worse than professional politicians. His only goal, now, is to wear down the handful who actually take some of his craziness seriously. Starting with Bersani, known as the "Spot-Remover" for his campaign comment that he would rid leopard-Berlusconi of his spots. But, short of some unimaginable coup de théâtre, the secretary of the Democratic Party (PD) will certainly not be saved by high-level summits, behind-the-scenes dinners or meetings of the party leadership, such as the one held March 6.

After the tender offer launched by Grillo for Bersani's party, the Spot-Remover's future seems uncertain. Above all according to polls, including the still-to-be-released one by Euromedia research which indicates that with Bersani still the party's candidate for prime minister, another election in the short-term would see as the two protagonists Grillo (even with the chinks in his armor mentioned above) and Silvio Berlusconi (despite the proceedings against him) who has apparently already overtaken Bersani by a number of percentage points in the polls.

But reality says it clearest of all: Bersani has missed his opportunity to become prime minister. Despite this, in order to block the way of his successor-candidate Matteo Renzi, Bersani will attempt to form a rickety minority government with outside support from Grillo. A solution which Renzi finds hard to digest because he has nothing in common with the Politico-Comic and is, instead, following a parallel course towards other shores (for example, his meeting with Mario Monti at Palazzo Chigi on March 5).

Even more significant is the opposition from Giorgio Napolitano and Grillo, himself. President of the Republic Napolitano insists on a stable government, not a minority one. The leader of M5S, in order to remain in opposition (and continue to suck blood and votes from the Democratic Party), is focusing on a coalition government between the PD and PdL (Center-Left and Center-Right). What's more, the Italian President, if he could, would immediately entrust the government to Renzi who is considered to be not hostile to Berlusconi and the center-right.  The problem is that more than half of the PD's group in parliament, faithful to the Spot-Remover, would work daily to undermine the solidity of a government so-comprised.

In short, a dead-end that Napolitano will attempt to solve through a technocratic alternative, like that of Monti, but with someone who is less-arrogant and more open to growth policies and not just austerity, therefore theoretically more acceptable to Grillo. The names being bandied about include Fabrizio Barca, Ignazio Visco, Stefano Rodotà, front-runner Anna Maria Cancellieri and (less-probable) Corrado Passera. Over recent hours, Napolitano is reportedly evaluating other potential candidates for prime minister to propose to the parties, individuals who are not technocrats, but high-level career government bureaucrats.

According to us, some in the Quirinale (residence of the Italian President) have suggested to President Napolitano that he take into consideration recent heads of the Supreme Court. However, this list was immediately whittled down because of the less-than-optimal health of some of them and the more-or-less open political allegiances of others. It was further shortened when the name of Ugo de Siervo?"president of the Court who ruled on the case between Napolitano and the Palermo DA on alleged dealings between the government and mafia?"due to force majeure had to be excluded.

In the end, the only potential name remaining is that of Franco Gallo, the current president of the Supreme Court, who has another factor in his favor: he knows something about economics and, in fact, between 1993 and 1994 he was the Finance Minister in the interim (and efficient) government of Carlo Azeglio Ciampi. It is no accident that in the midst of all the would-be advisors around him, the only one Napolitano asked the help of was Ciampi. Involving a person nearly 93-years-old might seem crazy, but there's method in his madness.

Grillo and Ciampi like each other. It goes back to 1997 when Grillo attacked the then-Treasury Minister in one of his comedy routines. Ciampi wrote to Grillo who called him and eliminated the jokes referring to him. But that's not all. On August 3, 2002, President Ciampi and Grillo met along with their spouses in La Maddalena, Sardinia. The four of them sat by themselves, deep in conversation. Grillo, with admiration, says Ciampi's wife, Franca, is quite a woman. She told him, "You two, you and my husband, haven't lost your courage, like two Musketeers." President Ciampi, Grillo adds, "instills courage, and he's a bit like me." A swim together and the friendship is sealed. Although only occasionally, they have continued to stay in touch. We'll see if Ciampi is a successful go-between. To keep Italy from sinking. Or as Grillo might say, from f****sinking.