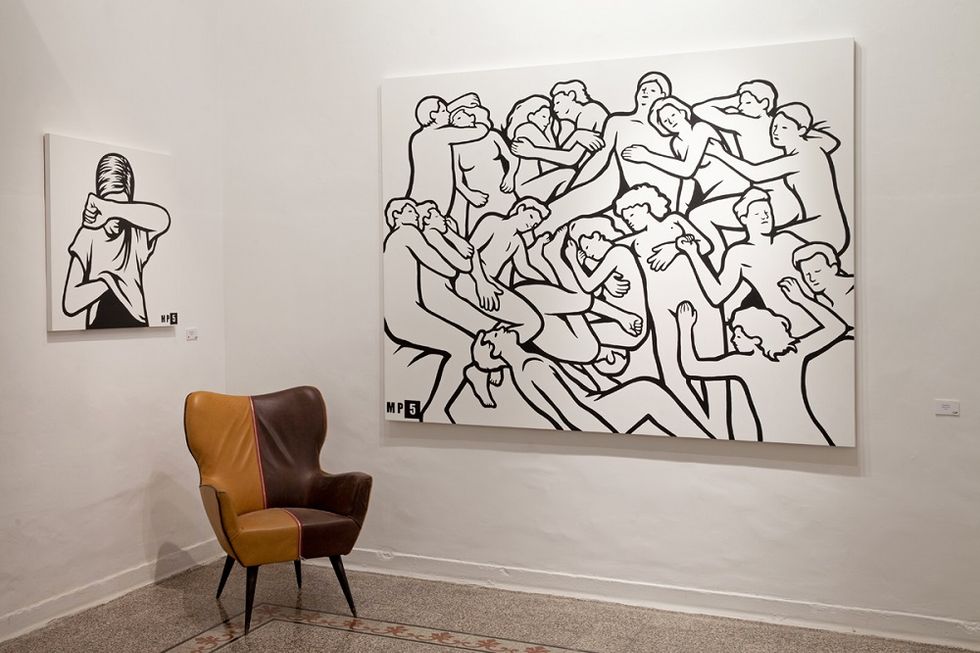 A polyhedric woman with many talents

MP5 is the name of the Italian "She-Artist" who is revolutionizing street art and graffiti. Born in Naples but now living in Rome, MP5 can be considered as a cosmopolitan woman. used to travel to bring her art abroad.

Among her talents, she is a street writer, a cartoonist and an illustrator. Her carrier began by studying scenography for theatre in Bologna and later went to the Wimbledon School of Art in London. When she started experimenting Public Art, MP5 moved to France where she started working. Today, she can be proud of having a great number of international collaborations, along with several international awards.

She is also part of committees organizing national and international festivals, and she has never stopped producing cartoons and painting all over the world.

Her art is one of a kind. Smooth lines, faces and human bodies barely stylised are a remarking feature of MP5's works. Moreover, the use of black and white brings the spectator to another dimension, where time and space are not distinguishable. Interesting is the impact her masterpieces give, i.e. elegant, introspective and free from any spiritual allusions.

MP5 ecenltly revealed to Huffington Post that her art draws inspiration from noir films of the 1970s or to some previous ones, such as "What Ever Happened to Baby Jane". Boldly, the artist declared that she is not interested in "simple drawings" but she tries to create a set effect on her works, sometimes altering the places in order to fit them perfectly with the surrounding environment.

Some of MP5 most popular works are "Minotaur or Red Line of Destiny", in Switzerland, that is inspired to the myth of Arianna and Theseus and sees an unconventional use of red. Also "Esagramma 45", located in the Mecenate Auditorium in Rome has received great appreciation from the public, thanks to its compound revelation from the Bible, I-Ching and Chinese Divination.