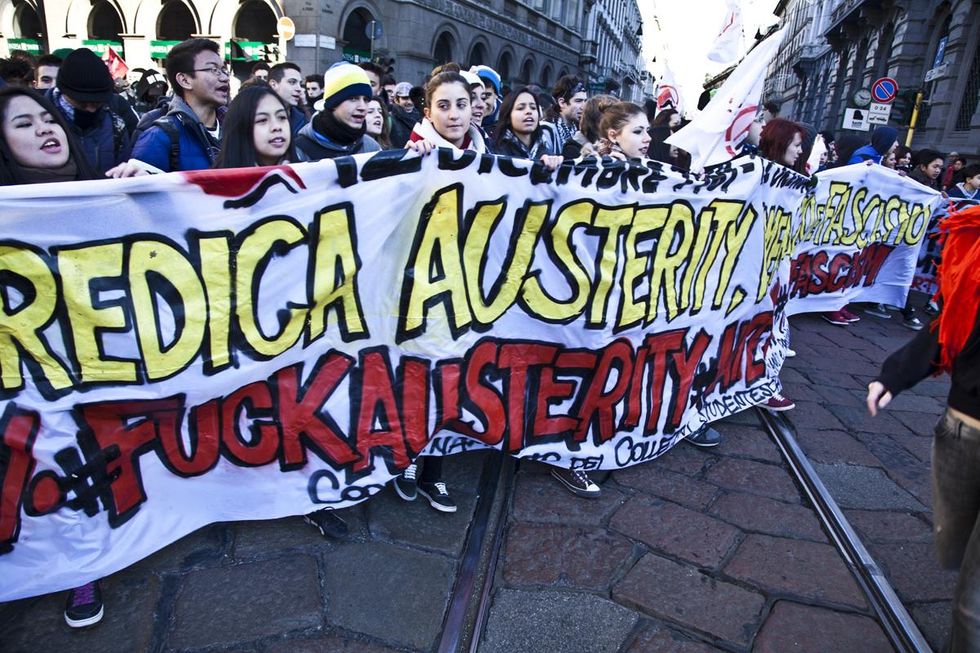 Economy: 2012, one of the hardest years for Italy

Taxes, decline in consumption, poverty: the tragic combination of these factors has characterized 2012 in Italy. The country has suffered one of the most serious crisis of the last few years

Austerity is the word that better describes the current situation in Italy, referring to a policy of deficit-cutting by lowering public and private spending. It is not by chance that this term was used for the first time after World War II in Great Britain, when Labour Party, which won 1945 general election, adopted drastic measures aimed at  economic  recovery.

How many taxes do Italians pay?

The current austerity in Italy reminds very closely that of a post-war period, with the difference that, in Italy, the deep recession is caused more by a heavy fiscal burden rather than a spending-cut policy.

Taxes that we are supposed to pay over the next few years.

The heavy fiscal burden has brought to a drastic spending contraction. Italians have started belt-tightening on all fronts. Some examples : real estate market suffered a 18 billion euro drop, or 6 billion euro spending cuts on fuel:  with the consequence that there are more cars parked in garages than those circulating around the cities street. And furthermore,  a 1 billion telephone calls decline.

As a whole: a total spending cut behaviour amounting to 33 billion euros.

A drastic saving policy that affects even the most time-honored customs of Italians, ranging from the weekly restaurant dinner to the morning cappuccino and cornetto at the cafè down the street.

According to the latest data provided by Istat (National Institute of Statistics), Inps (National Social Security Institute),Ministry of Labor the at-risk-of-poverty rate in Italy has gone up to 29,9% in 2011 from 26,3% in 2010, the most negative trend among the EU countries. This situation could only get worse during 2012. There are, currently, about 8 million poor people including working people on temporary contrac.

It must also be underlined that one retiree out of two lives with less than 1000 euros per month.

Nothing better than the drastic decline in food consumption reflects the crisis Italians are facing.

Food is generally one of the last sector to be affected by crisis in Italy. Well now, according to Coldiretti ( Federeation of Italian farmers), the percentage of Italians that cannot afford a complete meal, at least once every two days, has reached the 12,3% from 6,7% over the past twelve months. According to Coldiretti there are 3,7 millions of  poverty-stricken Italians that get meals and food packs from non- profit organizations.

The Italian austerity of 2012 reminds a post war reality, and this is certainly something the new government in charge after elections  will have to deal with.