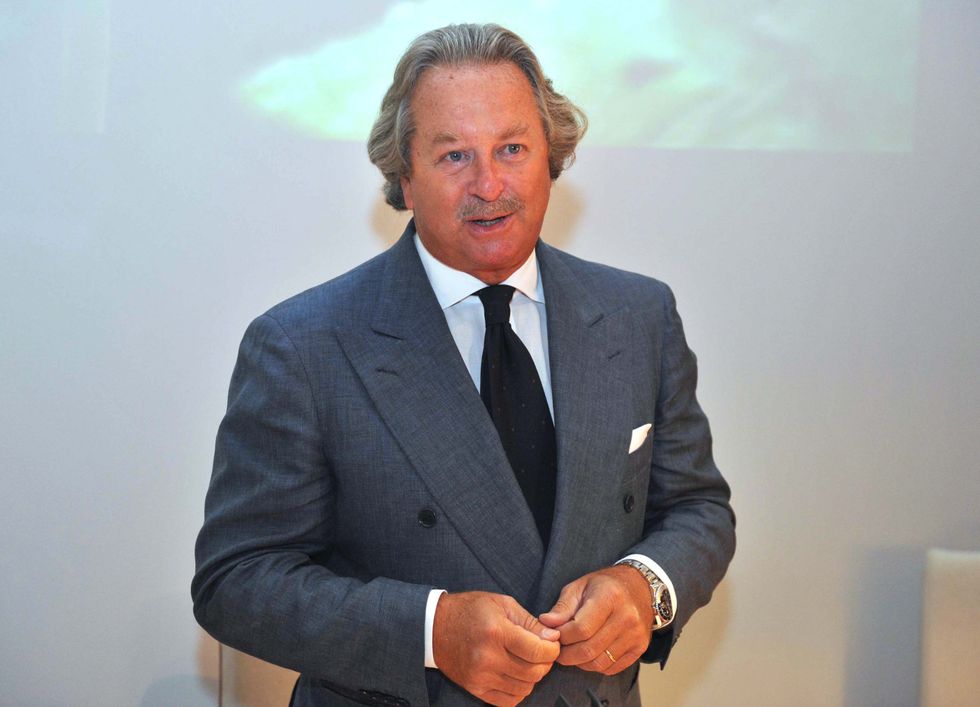 Loro Piana: Come with me to attend the championships for the finest wool in the world

Pier Luigi Loro Piana is always on the go. Because, thanks to customers, employees and suppliers, this entrepreneur’s world grows larger every day, with its eight factories, 135 stores and eight branch offices abroad, it extends from Mongolia to Japan, Australia and Korea

"I'm late," he says. It's 3:30 pm on Wednesday, May 9 and Pier Luigi Loro Piana steps quickly into the building at 711 Fifth Avenue in New York where the company that bears his name has its US headquarters.

In reality, his first meeting isn't until 4 pm, but he's someone in a hurry, only seemingly in contrast with the virtually-timeless products from the company in Quarona (province of Vercelli) that he runs together with his brother Sergio: fabrics, clothing and knitwear using only the finest wool and cashmere which require painstaking artisan skill.

And, above all, materials directly connected to the cycle of nature - merino sheep from Australia and New Zealand, or the vicuña, an animal native to the Andes that was on its way to extinction and which Loro Piana helped to save. Not to mention the lotus flower of Burma from whose stalk farmers extract - by hand - no more than 120 grams of fiber per day.

This means that, each month, from these 120 grams per day, a maximum of 50 meters of fabric can be produced, a fabric similar to old-style linen and raw silk, but much softer. Exactly, because in the company's philosophy, as its enterprising head never tires of repeating, "luxury is quality without compromise". And this requires money ... and time.

And yet, Pier Luigi Loro Piana is always on the go. Because, thanks to customers, employees and suppliers, this entrepreneur's world grows larger every day, with its eight factories (six in Valsesia), 135 stores and eight branch offices abroad, it extends from Mongolia to Japan, Australia and Korea. The result: 360 flight hours per year, an average of an hour each day.

But on the other hand, if for years, along with his brother Sergio, he has been able to bring to this company - founded in 1924 by his great-uncle Pietro and expanded by his father Franco - a two-digit growth rate (+17% in 2011 alone with billings of 563 million euros), it is thanks to his frenetic enthusiasm that doesn't allow him a moment's rest. "I travel a lot because I want to meet everyone, from customers to breeders, with an open mind and not taking anything for granted," he explains to Panorama which decided to follow him during this recent, very special trip to the US.

In fact, it is in New York that the Loro Piana group decided to hold the 2012 Record Bale challenge cup which, since 2000 on the initiative of the Loro Piana brothers, has seen Australia and New Zealand face off to see who produces the finest bale of merino wool in the world. Total weight: 100 kg.

"We began in the 1980s when, along with my brother Sergio, we had the opportunity to buy 20 bales of the most beautiful wool in Australia, snatching them out from under a famous former English spinner," he tells us. Then, New Zealand was added to its suppliers. "At that point, we thought that within those twenty top Australian and New Zealand bales, there was undoubtedly one for each country that was better than all the others. And we were able to find the way (until then impossible) to work with them individually." And so the first Record Bale was born (the year: 1997).

But Loro Piana decided to raise the stakes even higher. "In the wake of our passion for boat races we said: we are already awarding the two best breeders in Australia and New Zealand, but why don't we create a competition between the two countries, a Loro Piana Wool world challenge cup, in which, each year, the winner of the two takes home a trophy?"

In short, a super-world cup of the finest wool that allows Loro Piana to guarantee its customers lengths of fabric for 40 suits from each of the two finalist bales, each length strictly numbered and dated and with the title of having been made from the thinnest wool in the world for that year.

And it guarantees the winning breeder not only the market price (about 1,500 dollars per kilo), but also a bonus of 1,500 per kilo and, above all, the honor of this much sought-after title between these rival countries. "What we want to support and reward is not so much the individual record, but rather the striving for continuous improvement in quality that breeders such as yourselves are involved in," Loro Piana told the 2011 challenge finalists, seated around the table of the conference room in his 5th Avenue offices: Australian Susanne Triplett from Highlander Farm, first place winner with 11.1 microns and New Zealanders Yvonne and Barrie Payne from Visulea Farm (11.3 microns).

People who are the salt of the earth, women and men more accustomed to months of solitude in the immense open spaces of their sheep farms than at high-society soirées in the Big Apple. They don't say much and become as excited as children when they are told that, in addition to a stay in New York, the prize also includes a trip to Niagara Falls.

But they show their stuff when the discussion turns to breeding. It is no accident that in just ten years, also thanks to this system of awards and America's Cup-style competition, the quality of the wool produced has improved by 20 percent. And at Loro Piana, which is the world's no. 1 buyer of extrafine merino wool from Australia and New Zealand, this is what counts.

In the meantime, the meeting continues. They watch the two films about the farms, they smile at the bucolic scenes with the sheep and breathtaking scenery of those faraway lands, they decide on the final details for the awards ceremony on Thursday, May 10 with an international press conference and sit-down gala dinner for 200 super-selected invitees at the Metropolitan Club. "For years, we celebrated the Record Bale in Rome, but then, also as a boost to our exports, we began to hold it around the world, including Moscow, Peking and Istanbul," Pier Luigi Loro Piana recalls. "This was the right moment to be in New York."

Now, more than ever, in fact, the eyes of the Loro Piana brothers are focused on the States. And the second meeting of the afternoon confirms this. Seated in front of the desk in Pier Luigi Loro Piana's private office are Sebastiano Moschini, senior vice-president of the textile division of Loro Piana USA, and Fabio Re, managing director of the Loro Piana textile division. Subject of discussion: the US market, the second most important for the group, after Europe. Business is going well, as the two managers explain.

Even the most recent 1,300 sqm store on Madison Avenue is doing extremely well (billings have doubled) and the previsions for 2012 are positive. But the focus is on the Warren Corporation in Stafford Springs, Connecticut, the textile company purchased in 1988 to avoid the 40 percent customs duties and where, today, about a hundred of the group's 2,300 employees work. The Connecticut plant produces Made in USA Loro Piana fabrics for top American customers, as well as clients in Canada and Mexico. A choice that has been a good one for many years, the company head and his managers say, but now things need to be re-examined for the future.

In fact, customs duties no longer exist and in 20 years, the American manufacturing supply chain has been gradually dismembered, under attack in the upper segment by "Made in Italy" and in the lower segment by the Chinese competition. Of course, it emerges from the discussion, that a textile manufacturer in the US knows it can count on 245 working days, compared to 235 days in Italy and, overall, labor costs that are 10% lower than in Italy. But the major issue is understanding if there will be a market. And, regarding this, there are signs of change which need to be monitored.

To get further confirmation, before going to New York for the Record Bale, Pier Luigi Loro Piana stopped over in Seattle where he met with a leading up-scale chain. "Of course, the election situation could be misleading, but from the incentives and state and federal aid starting to be granted, it would seem that there is a commitment to recreate a Made in the USA textile and garment industry. This would help us a lot, given that we are the only ones who have kept a factory in the US going," concludes Pier Luigi Loro Piana.

Yes, America. Everyone is looking to Asia, with China in the lead, and obviously this also includes the Loro Piana brothers. Three of the ten stores opened in 2011 were in China where they now have a total of fifteen, and further openings are planned for 2012. But here, for once, Pier Luigi Loro Piana is less in a hurry. He also explains this to a journalist from Hong Kong during the press conference organized on Thursday morning, May 10, to present their new store on Madison Avenue, when the journalist asks to what extent the group is focusing on emerging countries. "The first time I went to China was in 1986 and I saw incredible development and I believe in it, but I think the right thing is balanced growth," Pier Luigi Loro Piana explained.

Which means a mix between Europe, the Middle East, Asia and, yes, the United States. For this reason, someone thought to insert the song New York, New York into the program tenor Piero Mazzocchetti and flautist Andrea Griminelli (invited on the express instructions of music-lover Pier Luigi Loro Piana) offered diners at the Record Bale dinner. But, after all, it was an all-Italian evening, so after Caruso, everyone broke into 'O sole mio. Perchè no?