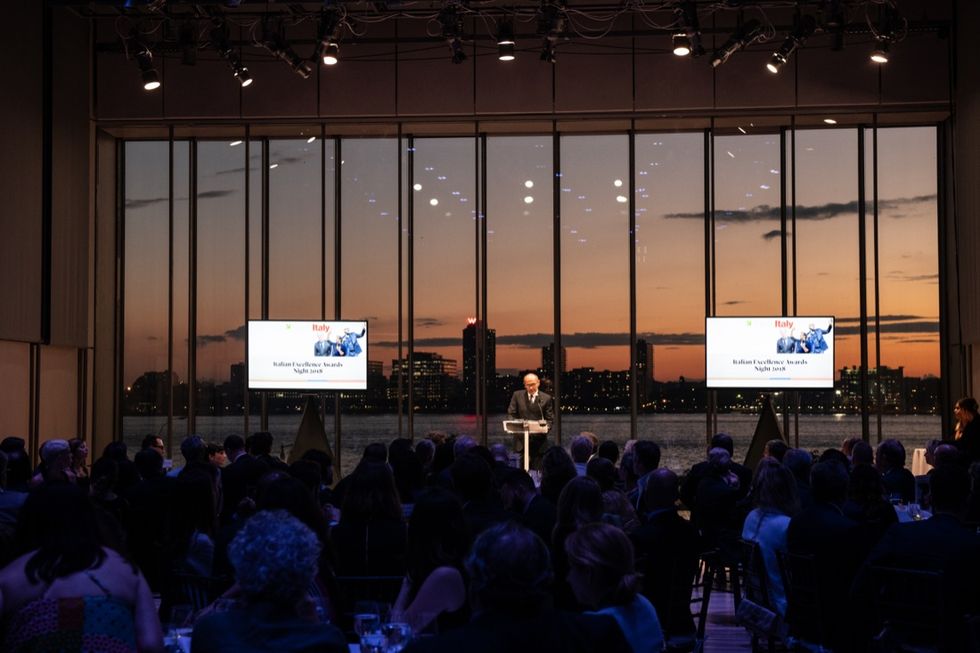 Panorama awards Italy that do it better

At the Whitney Museum, the Leadership Excellence Awards: from Gabriele Muccino to Mario Biondi, from the Grimaldi group to Lamborghini

A breathtaking sunset over the Hudson, a warm evening after the almost Caribbean roar of water in the afternoon, excellent champagne for an aperitif on the terrace, a guided tour of the wonders of art enclosed in the Whitney Museum in Manhattan and therefore an electrified and cheerful atmosphere: the Gala dinner organized by Panorama, as part of the "three days" of "This is Italy", could not have wanted a better context.

And the welcome music video, with a series of stars who have made the history of music, including Frank Sinatra, gives the director Raffaele Leone the opportunity to open with Mario Biondi, for vocal affinity with "The Voice", the series of awards that marked the appointment: "He sang in English, but it was very, very Italian", and the Catania blues-man, international music star, took to the stage to collect the Leadership Excellence Award assigned by Panorama to enhance the absolute quality level achieved by the artist and his deep bond with both his homeland and the United States.

While at the white tables, set for ten, more than 120 guests would sit after the cocktail and take advantage of the caponatina and homemade bread already ready on the tablecloths, the stage was filled with guests and awards, with an exceptional duo to present them: in addition to Leone, Nicola Porro, one of Mediaset's most beloved television faces, deputy editor of the newspaper Il Giornale and collaborator of Panorama. Also helped, from time to time, by other colleges in the role of "godfathers" of the award-winning.

For example, the director of Ciak, as well as artistic director of the David di Donatello Academy, Piera Detassis, who had the task of calling another star of the show, the director Gabriele Muccino, who won the David di Donatello in 2001 as best director for his "The Last Kiss" and who established herself in America by shooting in Hollywood, for production and with the participation of Will Smith, two blockbuster films: The Pursuit of Happiness and Seven Souls.

Another kind of art then received the prize from the hands of the director of Icon Michele Lupi: architecture, with Enrico Bonetti, a young Italian archistar who works in New York in the professional atelier Bonetti / Kozerski Architecture created with Dominic Kozerski.

It was then the turn of a prize-giving ceremony with a special flavour, personally managed by Leone: that of Leo Lionni, the Dutch art director who in 1964 called on Mondadori to direct the monthly Panorama which, in 1967, was transformed into the weekly, with the subsequent direction of Lamberto Sechi. The prize was collected by his son Louis.

And while the guests were delighted with the dinner - naturally very Italian, even if skillfully contaminated by an international touch - the awards continued: Alessandro Farmeschi, CEO of the American region of Lamborghini, which is consolidating and even extending its iconic fortune in the United States, which alone account for a third of turnover; Costantino Baldissara, Sales and Operations Director of Grimaldi Group, which with 70 years of experience is a dedicated provider of integrated logistics services based on maritime transport to major vehicle manufacturers worldwide: "North America in particular represents an essential market for the Grimaldi Group", commented Emanuele Grimaldi, Managing Director of the Grimaldi Group, "because it has long been an import/export logistics service provider for the American car giants" and just two months ago it collected, for this reason, the award for supplier of the year from Ford, the umpteenth in a long series,

Biagio Calabrese, general manager of the New York "hub" of Intesa Sanpaolo, a banker-manager who operates at 360 degrees alongside Italian companies that want to consolidate or undertake their business presence in the United States, achieving growing results and absolute value, then took the stage.

Then again Tommaso Dragotto, founder and president of Sicily By Car, who had a prize oriented not only to his unique career as a visionary entrepreneur who already has assets but also to the ambitious future of prophet of sustainability, with his now concrete electric mobility project in Sicily, and passionate ambassador of his land in the world.

Finally, an award to the Region of Sicily, which with an unprecedented organizational effort sent a fierce delegation to New York to accompany its food and wine companies to Fancy Food, which kicks off tomorrow, a true world showcase on quality food.