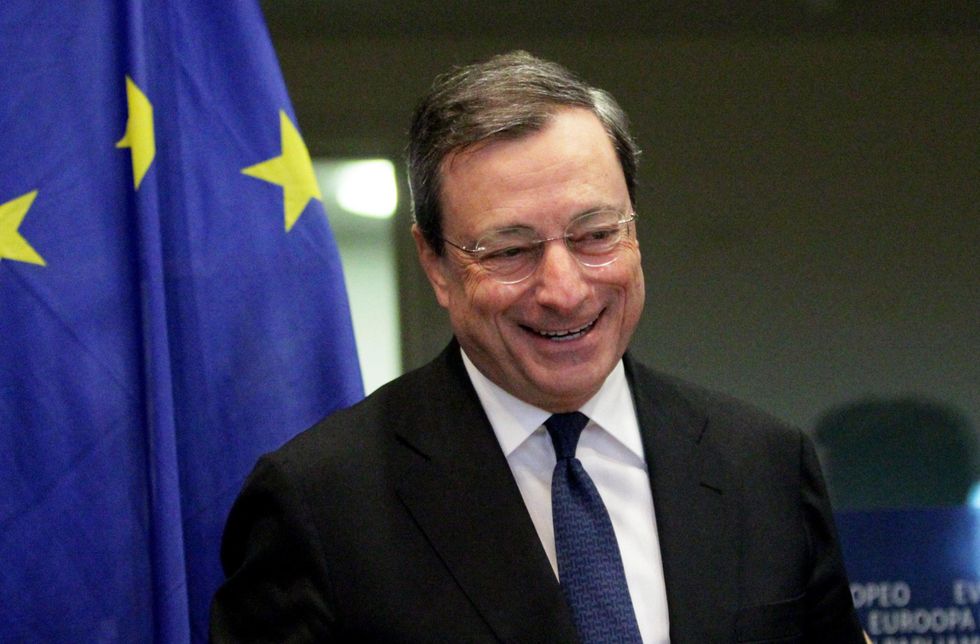 Mario Draghi, man of the year

He negotiated forcefully with heads of state and prime ministers. He fought against german prejudices. He won America's ok... This is the way the President of the Ecb saved the euro from the "perfect storm". And now...

"The triangle? No way!" That's the verdict of a friend of the family who knows Mario Draghi well, laughingly dismissing the current rumor that the governor of the ECB could be recalled to Rome, following the (probable) inconclusive results of the upcoming Italian elections, in order to lead a government of national unity and ease Mario Monti's move into the role held by Herman Van Rompuy at the head of the European Council.

"Don't be silly. Draghi remembers well the embarrassing Italian-French shuffle to free up the post of Lorenzo Bini Smaghi in the ECB in order to make room for him. Not to mention such a complicated power struggle?"it's pure fantasy. Mario is very down-to-earth."

Extremely down-to-earth. He is the real savior of the euro and the European Union, as recognized by the title "Man of the Year" conferred on him by the Financial Times and "European of the Year" by the French National Assembly. At 65, he has another seven years to go in his term at the head of the ECB. He could legitimately consider that practically every major institutional position in the world is open to him, including the UN. Naturally, his dream is to return eventually to Italy, in a top position, but it's a dream, not a whim.

"When Draghi said that the ECB would have done everything necessary to save the euro, stressing, 'believe me, whatever it takes', it really marked a turning point in European history," Corrado Passera, Italian Minister for Economic Development, told Panorama. "The real miracle he accomplished was succeeding in mobilizing the ECB and convincing Germany to follow, without destroying everything. And it is thanks to him that the European structure was brought back on track. Draghi is made for these types of scenarios, problems and solutions." In other words, not low-level political haggling. So, what will the most authoritative Italian in the world be doing in the near future? And what would he like to do? Is it true that he has become so fond of Italy that it borders on obsession?

"Yes, Mario loves Italy deeply, but he would never leave his job at the ECB today, even less to risk becoming involved in a government without political stability. It's something that could be discussed at the end of his term in Frankfurt," predicts Mario Baldassarri, president of the Finance Committee of the Italian Senate, a former doctoral candidate along with Draghi at MIT. And another friend from that same period, echoes the sentiment: "Draghi is letting everyone stew in this mess, then, at the end of the next legislature, he will be ready to get back in the game, that is, if he still wants to. If the next legislature also ends badly and Italy finds itself in need of a modern-day Cincinnatus, well, Draghi considers himself to be a civil servant and could always answer the call."

"In general, Mario is politically very pragmatic," Baldassari adds. "His background is that of MIT-brand liberalism and we know that in addition to monetary policy, there is also fiscal policy if you want full employment. That's why I call him St. Mario Draghi. Without him, Europe would have imploded. He saved the situation, buying time for the political union that does not yet exist. Now it's the turn of national governments, if they have the desire and capability."

A liberal wary of ideology, in short, "convinced of the need to use 'throttle blips' like in old cars," another old friend, Gianni Pecci, says of him. Pecci, who received him into Nomisma when, after MIT, Romano Prodi, meeting Draghi and Baldassarri in the United States at Franco Modigliani's house, brought them back to Italy and launched them in their future academic careers. The throttle blip, clearly, between rigor and development.

And the metaphors to describe Draghi's strategy abound: "He was like those sleight-of-hand artists who pull out the tablecloth without disturbing the china sitting on top," says another friend, alluding to Draghi's relationship with Germany. Even Draghi himself, answering a question of the Financial Times about the delicate issue of the euro-skepticism of German public opinion, explained that he was able to show that there is no trade-off between fiscal policies of austerity, on one hand, which must continue, and the growth or recovery of competitiveness on the other. Fiscal restriction can cause economic contraction and resulting social hardship in the short-term, but in the medium-term it produces positive results.

That may be ... but Draghi has an ace up his sleeve, even in the face of Chancellor Angela Merkel and the Bundesbank: the strong support he has from his American friends. In fact, he preaches German and practices American. This is the difference, the shift, from his predecessor at the ECB, Jean-Claude Trichet, who was much more Germanophile. And this cover the US projects over Draghi is the result of many factors and relationships. First of all, his years at MIT where his classmates included Ben Bernanke, the current head of the Federal Reserve, and where he became a friend of Stanley Fischer, who was his professor and dissertation advisor to Bernanke. Other American friendships are connected with his experience at Goldman Sachs: with Timothy Geithner, a convinced supporter of the stability of the euro as well as Europe's economic recovery, and Robert Rubin, mentor to both Geithner (Geithner served as under secretary to Rubin) and Henry Paulson, in turn Secretary of the Treasury under George W. Bush.

Rubin has come out officially on Draghi's side for over a year (including on the thorny and, for the moment, losing question of the eurobonds which Draghi is in favor of, but which are blocked by Berlin), including in an editorial in the Financial Times under the title "ECB is right to ask for more eurozone action" where he notes specifically in an aside that he is a personal friend of the president of the ECB. Words that are equivalent to concrete actions. "But beware," warns Giulio Sapelli, professor of economic history in Milan and a colleague of Draghi's for years on the ENI board of directors. "For him, America is a philosophy, a passion, not submission." In particular, it irks him being branded a Goldman Sachs man. He worked there three years, compared with the twenty spent in government. "I'm a great 'commis'," he likes to say about himself.

Although a man of means, in full-blown Ciampi-style, Draghi applies a good dose of sobriety even to his daily life. "The college graduation of his son, Giacomo, was celebrated in Milan in a pizzeria," a friend gives as an example. In Rome, he lived in a house in the Parioli neighborhood, nice but nothing special, just 150 square meters. Since his period with Goldman Sachs, he has also kept one in London. But in his free time he willingly gravitates towards Italy, usually Milan, where his son Giacomo (b. 1982), economist and banker at Morgan Stanley (London) graduated from Bocconi University and where his daughter Federica, a few years older and economist and biologist, is currently a researcher at Genextra, the biotech company owned by Francesco Micheli.

"For Mario, his family is truly his only real refuge that he knows he can trust. His wife, Serena, divides her time primarily between Milan and Frankfurt with a few stopovers in Rome," people say. He is tied to family ritual and sticks to those things he trusts (for example, his dentist is from Padua, his wife's hometown, and that's inevitably where Draghi goes whenever he has a problem). He has a keen sense of humor. Evidence of this is the pride of place given on the desk of his home in Rome to the "golden tapir" booby prize awarded him in 2008 by the popular Italian TV show, "Striscia la Notizia" after the attack on him by president emeritus of Italy, Francesco Cossiga. Just a tiny taste of the harsh political treatment he could expect if he ever decided to return to Italy to take up a role in government.

At the time governor of the Bank of Italy, Draghi was reading peacefully his favorite magazine, Golf Digest, on his way to his office in Rome in Via Nazionale. One of the program's correspondents, Valerio Staffelli, stepped up to the car window, saying: "Cossiga said you couldn't be prime minister because you would sell out all your American friends. That would have bothered me," Staffelli added provocatively. Draghi responded: "I was bothered, very much so. But do you believe all those things Cossiga said?" Staffelli: "Me? I hope not, because you are the head of the Bank of Italy and I really hope they're not true." "Good for you," Draghi concluded.

In reality, despite his image ("No one can read his poker face," Carsten Brzeski, the Dutch economist has said), Draghi isn't cold. He reads the papers, likes the gossip, has a small group of close friends with whom every once in a while he likes to share a good glass of wine, and he is extremely fond of Carlo Azeglio Ciampi. But he has never wanted to create his own groups. "He chose me because he wanted to make use of internal resources, and he taught me that a boss can always build a fire from the wood he has on-hand," says Domenico Casalino, today CEO of Consip (the entity within the Ministry of the Economy involved in public administration) and who worked with Draghi for nine years at the Treasury.

"When he decided to develop a new model for calculating the government's needs, he looked among the civil servants in the ministry and picked me out, going four civil service grades below his own. And he got his hands dirty. I remember his tremendous ability to model processes, personally working with Mathlab, one of the most advanced math software programs."

"Also in terms of internal resource management," notes another Ciampi man, Gianluca Garbi, formerly CEO of MTS and currently of Banca Sistema, "he's a decision-maker, but he doesn't rub it in to those who lose. He is also a tremendously hard worker." Not least because he is an insomniac by constitution. Three hours of sleep are all he needs. For the rest he reads, studies, writes and gathers his thoughts. For the moment, all centered around Europe