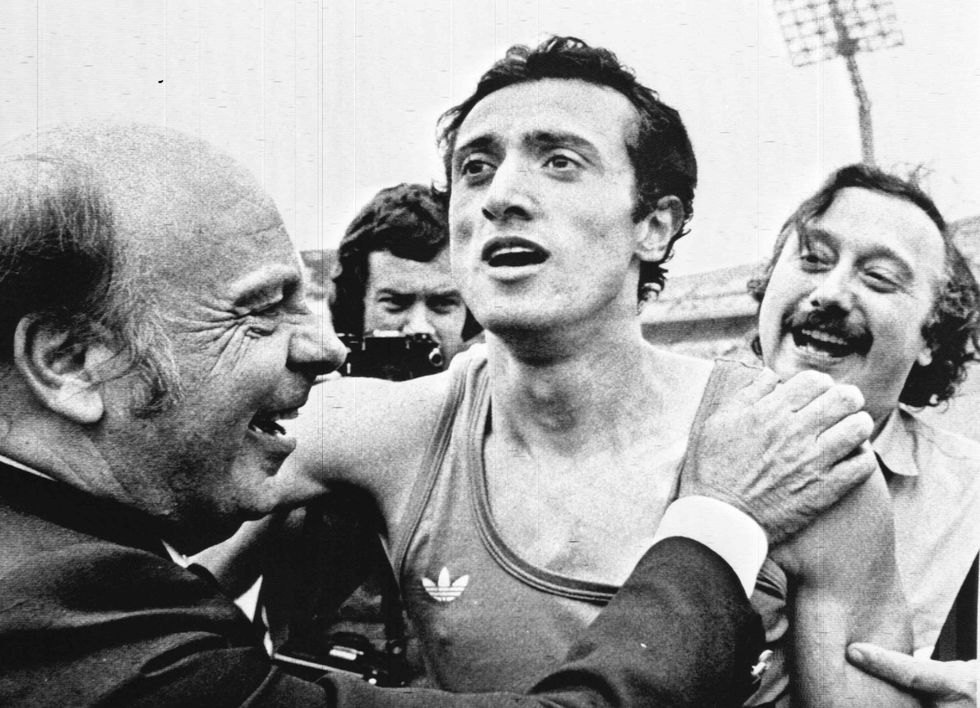 Pietro Mennea, legend of the Italian athletics, has died at 60

Pietro Mennea, an Olympic sprint champion from Italy who held the world record in the 200 meters for 17 years, died Thursday. He was 60

On the first day of spring an incurable disease carries away great Italian athlete Pietro Mennea.

Cruel destiny for the man who built a legend running in the wind. He showed sometimes a grouchy, hard- to- deal- with - temperament, like his origins, but he was never banal and was always ready to fight for his ideas.

Pietro Mennea's heart stopped running at the age of 60, in a Roman clinic after a  strong battle against an incurable disease.

He was an athlete that made Italians proud. Italian sport is in mourning, because an unforgettable piece of history, is  leaving with him.

The fastest among the whites, and the last one to be able to keep up with the black runners that shortly thereafter would prevail. His 200m time is still European record.

Those not so young anymore remember well his accomplishments. Mennea' s record wasn't broken until Michael Johnson obliterated it.

Smooth and fast  and running at the high altitude of Mexico City on the occasion of the 1979 Universiade, he stopped the clock after 19,72 seconds. He set a world record that lasted 17 years.

A slow departure, and then faster and faster over the final 50m before crossing the finish line raising his hands in victory: this was Pietro Mennea.

A temperament forged by the asperity of his native land: Puglia.

The legend says that, at the age of 15, he used to face, on a Barletta road,  Porsche  and  Alfa Romeo  cars to earn 500 Lire, to buy himself a sandwich or a cinema ticket.

From those days, he never stopped running and he found himself standing on the Munich Olympic podium in 1972. The beginning of an outstanding career. He  won a golden medal in Moscow in 1980, he was in the final in Los Angels, and in the tournament in Seoul, the last sports catwalk of an extraordinary career: after holding the Italian flag on the opening ceremony day, he was later on the racetrack again for his 5th consecutive Olympics.

The number of medals says it all: two bronze medals, the golden one in Moscow, two world medals, and six European medals.  After Mennea, it was seldom seen a European runner able to keep up with Afro-Americans. Mennea's victories were not only a question of mussels but the result of a determined and proud personality.

After retiring from sports, Mennea  started a new and brilliant career as well. He was member of the European Parliament, lawyer, book writer.

His CV was stunning, he had four graduate degrees:  in Political Science, Law, Literature and Sports Science. He was also involved in class action and was physical education teacher.

Pietro never stopped running, only the disease was able to stop him...On the first day of spring.