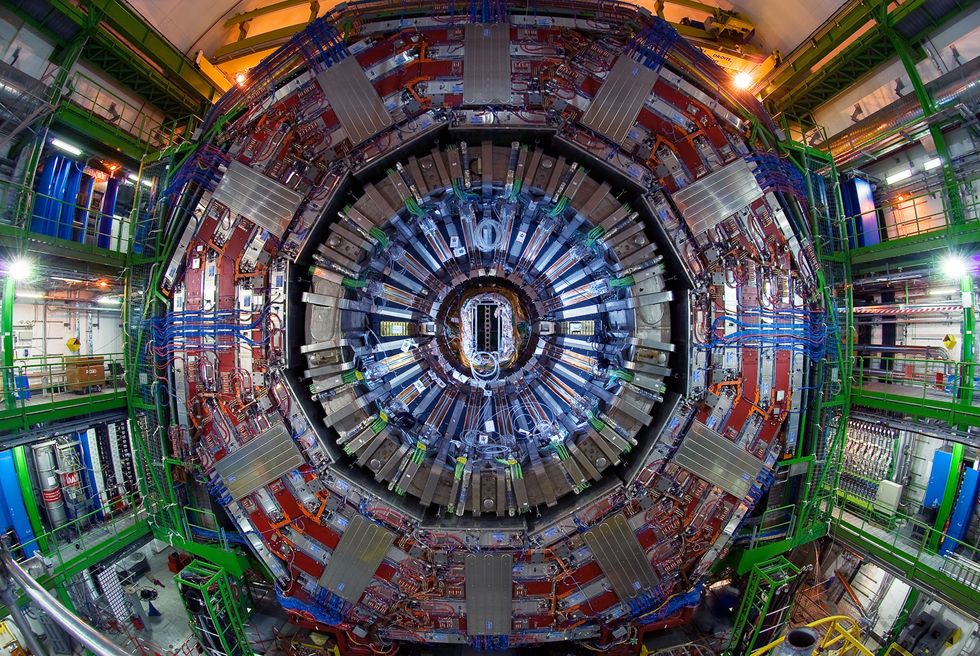 Italian physicists on Higgs boson hunt: a story of triumph and tears

How Europeans have conceived a successful long-term investment together: this is what Luciano Maiani, former president of Italy's National Institute for Nuclear Physics (INFN), tells in his new book A caccia del bosone di Higgs (On Higgs Boson Hunt), published by Mondadori. The adventure of Cern (European Organization for Nuclear Research) represents a model of how European nations have been able to cooperate together so to achieve scientific success and economic profit. Maiani has been one of the testimonies of this adventure in that he has worked at Cern as a physicist and has also served as a General Director.

In order to fulfil their aims many of the greatest physicists also had to take on the unusual role of managers and communicators. One of the merits of the book is that it combines the communication of the scientific ideas that led to the discovery of the Higgs boson with an analysis of the economical, financial and organizational choices that physicists have been faced with.

However, the important aspect that emerges in the book is the fundamental role played by the Italian physicists since the planning of Cern. When the idea of the laboratory was conceived, Denmark, Sweden, Finland, Norway and The United Kingdom opposed the plan of Italy, France and Germany for the construction of an entirely new laboratory and proposed a structure of coordination between the research centres of the European countries.

It was thanks to Edoardo Amaldi, co-founder of the Italian National Institute for Nuclear Physics, and Pierre Auger, Director of the Department of Mathematical and Natural Sciences of Unesco, that the agreement was possible. Maiani points out that Amaldi and Auger's objective was not only to build a new accelerator but also to encourage Europe to move in the direction of scientific development in order to keep pace with the United States.

According to Maiani one of the possible options was to locate the new Cern nearby lake Como. As it happens, the news spread and a disinformation campaign was mounted by Italian trade unions and other organizations. Finally the major of Como, one of the supporters of the proposal, threw in the sponge.

In the course of the last fifty years, several experimental structures have been built at Cern and Italian physicists have always been protagonist. For example, the first measurements of the muon magnetic moments were the result of an experiment proposed by Gilberto Bernardini, at that time Research Director at Cern. In turn the measurements of the magnetic moment of muon allowed the development of QED, a theory that lies at the foundations of the phenomena studied at Cern in the following years.

When the proposal of the Large Electron-Positron (LEP) collider to be built underground was put forward, the task of determining the features of the machine as well the dimensions of the tunnel were entrusted to different sub-groups of physicists guided by Antonino Zichichi. Futhermore, many sub-groups were directed by other Italian physicists such as Nicola Cabibbo, Sergio Tazzari, Piero Dalpiaz, Emilio Picasso and Paolo Strolin.

In 1981, the general director Erwig Schopper assigned the responsibility for implementing the project LEP to the Italian physicist Emilio Picasso who, in turn, nominated as vice-leader the Italian engineer Giorgio Brianti. The collider was ready in six years - on the 14th of July 1983 the first beams of particles entered the ring.

LHC, the Large Hadron Collider, the successor of LEP, was built in order to search for the Higgs Boson as well as some twin-particles predicted by the super-simmetry. The idea was strongly defended by Carlo Rubbia over other kinds of detectors and the first project of the machine was presented by Giorgio Brianti in 1986.

Finally, on the fourth of July 2012 at the International Conference on High Energy Physics, the Italian physicist Fabiola Giannotti announced that a group of physicists at CERN had discovered the alleged Higgs Boson. Few days ago Cern said that the spin of this particle is the only point to be clarified before confirming the discovery of Higgs Boson.

Chapter 16 in Maiani's book provides an example of the beneficial effects of research investments on economy. For example, he explains that the Italian enterprises got an economical return that considerably exceeds the Italian contribution to Cern budget. However, Maiani's argument is much more general and concerns the effects of research on the entire society: to illustrate his point he reminds the reader of the fact that the World Wide Web was developed at Cern.

It is unfortunate that the Italian Prime Minister Mario Monti, struggling to reduce Italy's budget deficit in 2013, announced a drastic reduction in public spending: Italian Institute for Nuclear Physics (INFN)'s budget was cut by 3,8 per cent this year and by 10 per cent in each of the two following years; on the other hand, Italy's National Research Council (CNR)'s budget faced a cut of 1,2 per cent this year and 3,3 per cent the next one. Life looks now more complicated for the Italian scientists who want to live up to their renowned predecessors in particle physics.