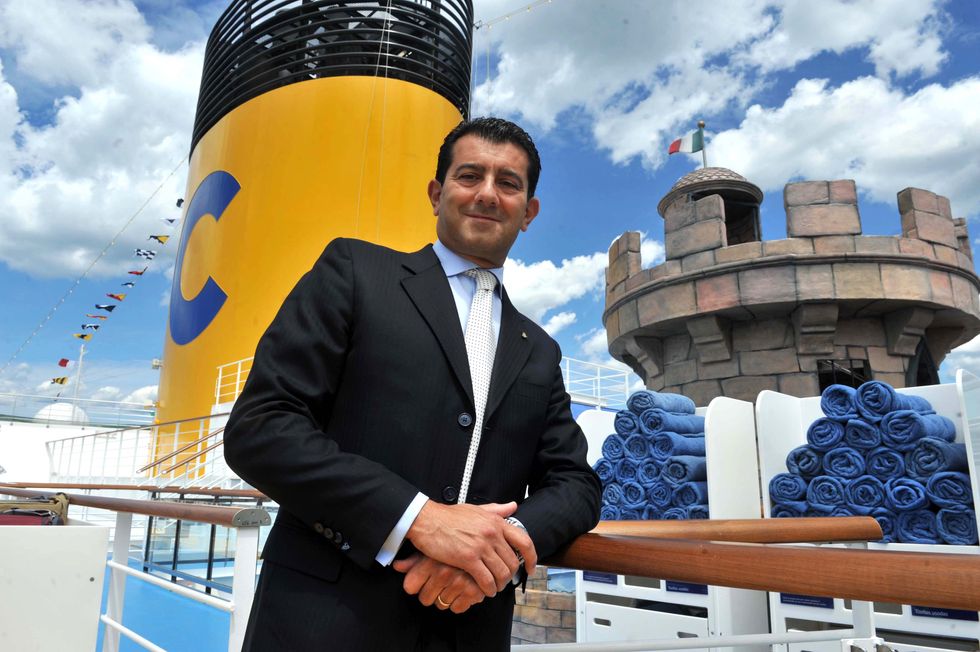 Gianni Onorato: “The shipwreck of the Concordia? The worst day of my life”

"We have paid passengers damages of about 11,000 euros per person,” says the number two at Costa Crociere. Winding up an extremely difficult year. With costs of 1 billion euros in recovery operations alone

The rust which from the side of the boat seeps into the sea is, paradoxically, the only sign of life on the Costa Concordia, which has been stranded off the coast of the Isola del Giglio for the last year. All around it there is feverish activity. Like ants around a huge bumblebee, 300 technicians are at work to rescue it, along with 100 divers.

ut the biggest cruise liner to run a-ground in marine history is just a lifeless steel hulk. Gianni Onorato, 52, looks away. Onorato is the chief executive, number two at Costa Crociere and he has spent exactly one-half of his life with the company. "Since that evening, I continue to experience bouts of depression," he says. "I keep thinking about Dayana Arlotti and the other 31 people who died. I often wake up during the night. With always the same thought, always. It was the worst moment of my life. I keep asking myself: why was the ship so close to the island? What was the captain, Francesco Schettino, trying to do? And why so fast, at 15-16 knots?"

Have you seen Schettino since?

No, we haven't met again. I didn't even see him on that tragic night. When I got there, dawn was breaking and I wanted to get to the survivors who had been housed in a gym. I might not even have wanted to see Schettino. But certainly, since that night, I have not seen or talked to him.

What would you say to him?

I have nothing against him personally, just the way he behaved. I don't understand it. I knew him well, just as I do all our 26 captains. He might not have been the best, but he had an excellent reputation. What he did still upsets me. A good captain doesn't do things like that. And I am still upset by the things he said.

You fired him and Schettino has taken you to court. How will it all end?

In Genoa, the judge has decided in our favor up to this point. There is another trial going on in Torre Annunziata, and we'll see what happens there. But note one thing: we didn't fire Schettino until July. We waited for the initial results of the criminal investigation, even if we understood from the very beginning that much of the information we received following the wreck was false.

It has been said that the "bow", sailing near land to provide a spectacular view, was a common practice. Is that true?

No. The Concordia had traveled that route 51 times before, always passing 5 miles from Giglio island. Only on one occasion, the previous August 14th, it passed closer, but at a speed of 5 knots. It was route drawn up in safety, authorized by the company and the Giglio authorities. A decision to be part of the celebrations for the night of San Lorenzo, the island's patron saint.

But other Costa Crociere managers have been charged ...

Let me just remind you that, in this criminal trial, we are the injured party. But we are standing behind our managers who have been charged, including Roberto Ferrarini, the head of the crisis unit and Manfred Ursprunger, our vice president. We think we acted according to the law.

Unfortunately, that was not enough ...

That's why we want to understand what actually happened. We immediately introduced ten new safety measures aboard our ships and we are discussing with the authorities changes in the navigation code.

What new measures and changes?

Today, as part of the drills, abandoning ship is practiced before the ship leaves port, while a year ago it only had to be tested within the first 24 hours. Plus, we have increased training on use of the lifeboats, established that the cruise routes are set in advance and communicated to the entire bridge and we have arranged life vests more efficiently and increased their number. In terms of the code, we would like to see the principle of a more collective approach to running the bridge introduced. To make sure that nothing is ever again entrusted to a single individual.

Were the damages paid to the families of the 32 victims significant?

For reasons of privacy, I am not at liberty to say how much was paid. But relations with the families are good. At the memorial ceremony on January 13, 2013 we were on Giglio island with over 80 family members representing 14 of the victims.

What did you say to them?

I don't want to talk about that, either. It was devastating, so much pain, so much suffering. I certainly don't claim to have helped them, but I at least tried to be there for them.

Aside from the victims, how much has the disaster cost so far, and how much is covered by insurance?

Insurance covers the value of the ship, about 400 million euros, plus part of the recovery operations. Extraction of the fuel alone cost 130 million, and to-date the overall cost has been 430. In June we hope to get the ship upright and actual recovery will start in September. The wreck will be demolished.

With almost all of them we have agreed upon an amount above what is normally paid, about 11,000 euros per person, plus restitution of whatever valuables were found in the safes that have been recovered. After a year, about 10 percent of the passengers are still in litigation, above all in America.

As expected, it has been an extremely difficult year ...

A terrible year. Half of Costa's 19,000 employees have been involved in some way in handling this disaster.

Have your finances felt the effect?

The accident had a major impact on sales in the period immediately following the event. And, also out of respect for the victims, we suspended advertising until March. We reduced prices by 20 percent. But things turned around significantly starting in April. The company closed 2012 in the black, even if below expectations.

Will you ever be able to cancel the disgrace of the Concordia?

We will never cancel the memory: bad, terrible, pure desperation. The important thing is to look at what happened in order to learn from it. And move on. In 2012 we launched two new ships, the NeoRomantica and the Costa Fascinosa. We have just launched our new flagship, the Diadema. And over the next two years we will be hiring 600 people. I never tire of repeating: Costa is a serious company.