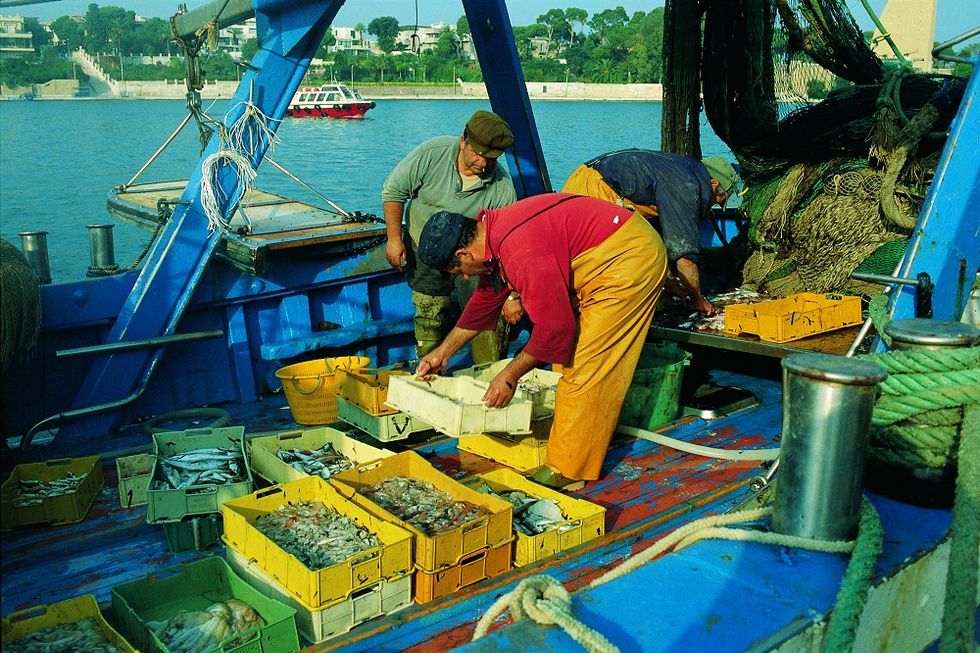 The secrets of Apulia's cuisine

The people of Apulia have never been wealthy, and have lived on agriculture and sheep farming, since nature blessed them with a mild climate and fertile soil. But the Apulians have exploited their imagination to create that endless source of joy and flavour which over the centuries has become their traditional cuisine. This tradition is based on simple elements: pasta (great quantities of wheat were produced  in the Tavoliere plains, near Foggia), cheeses, hearty country salami and hams, and fragrant and tasty vegetables. A unique range of food in a land which is like a bridge reaching out from Europe into the deep blue of the Mediterranean.

Three different culinary traditions coexists here, originating in 1222, when Federico II divided Apulia into Terra di Bari, Capitanata and Terra d'Otranto. These three districts were the forerunners of the present-day provinces of Foggia, Bari and Lecce, and their three styles of cookery basically present the same dishes with slight variations. Bread and pasta food, oil and wine represent the pillars of popular Apulian cookery, and there is a vast range of quality products. The golden wheat of Apulia is used for the many types of pasta, whether produced industrially, in fresh pasta shops, or by housewives. The various types of pasta (the most famous shape is orecchiette, shaped like small shells) are served with a wide variety of sauces, ranging from vegetables and pulses to meat. And absolute must is orecchiette con cime di rapa (orecchiette with turnip tops); Another specialty is ciambotto (fish ragù), invented in Bari, and prepared using various fish. The cuisine of the coastal regions is full of fish dishes, although fish is also cooked in the interior in a number of elegant recipes. The recipes are extremely simple: there is no point on covering, or worse, altering the flavor of the excellent fish and seafood with complicated preparations. For example, in Bari freshly caught baby octopus and anchovies are often eaten raw, and sometimes still alive. The oysters are also excellent and should also be eaten as fresh as possible with a squeeze of lemon juice and freshly ground black pepper.

In Taranto the mussels are exquisite, and their excellence is explained by a curious legend. From the seabed of the bay of Taranto rise "citri", jets of fresh water which encourage the breeding of mussels. The largest of these, whose vortex is visible on the surface, is called San Cataldo. It is in fact said that one day the saint threw his ring into the sea to calm a tempest. The source appeared in the exact place where the ring sank to the bottom, and this is why the mussels of Taranto are so good. While on the subject of fish, visitors to Gallipoli, the splendid city in the Salento area, must try scapece. This is  fish with a wonderfully aromatic flavor. The recipe involves small fish, which are then left to marinate in vinegar and saffron. There are many ways of discovering the Apulian gastronomic tradition.

Some of the most enjoyable involve following the region's wine trails. There are also dairy trails, which give visitors the chance to try ricotta and the region's other cheese. Another gastronomic masterpiece is tiella, a soup which is a legacy of Spanish domination. There is no official recipe, and every area has it version. The dish dates to the region's rural past, when families returning home from work in the fields put whatever they could find in the cupboard in the pot. More or less everywhere, in the small towns of the interior, and along the seafronts, there are many shops where you can buy Apulian bread, a product with a deserved reputation. Dark and full-favored, it is a prefect foil to strong-tasting food. Equally appetising are the many types of focaccia bread available.

Champagne, i migliori per il Natale 2021