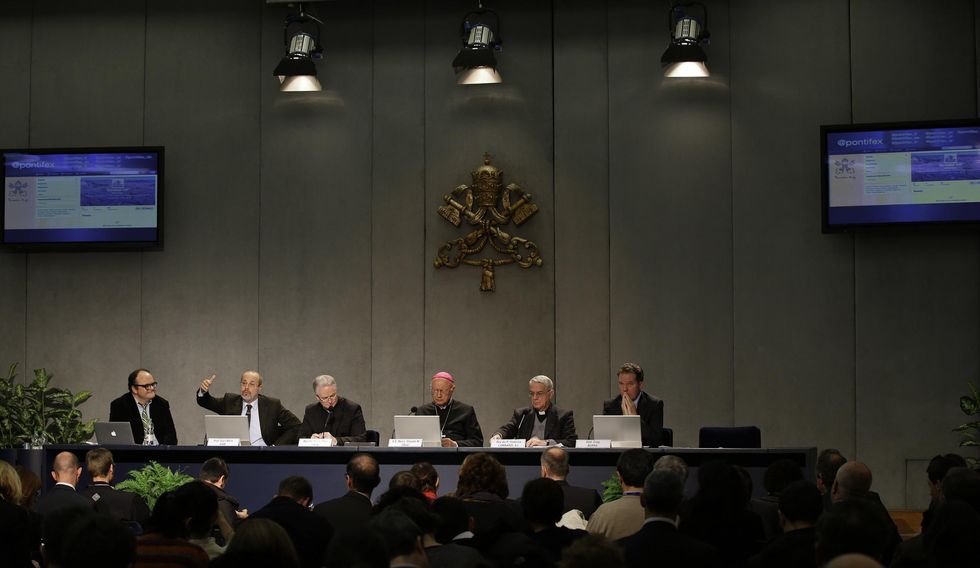 The Pope sees you, reads you, and he might even re-tweet you. In fact the Pope's official Twitter account is already online, which, however, it was clearly pointed out, will not "follow" any other user.

The Benedict XVI's official account in Italian "@pontifex_it" is already online, but we will have to wait next Dec.12 for his first tweet, since the Pope has decided that he will send it live during the Wednesday general audience. The account " will focus on issues related to faith".

The Vatican informed that the Pope's new Twitter handle will be in seven languages at the present time, the only difference will be the country initials, for instance "@pontifex_es" will be for Spanish .

The reasons explaining the Pope's presence on Twitter can be found in the following statement released by the Vatican:

The Pope's presence on Twitter is a concrete expression of his conviction that the Church must be present in the digital arena. This initiative is best understood in the context of his reflections on the importance of the cultural space that has been brought into being by the new technologies. In his Message for World Communications Day 2009, which was published on the same day as the Vatican's Youtube channel was opened, Pope Benedict spoke of the necessity of evangelizing the 'digital continent' and he invited young believers, in particular, to introduce into the culture of this new environment of communications and information technology the values on which you have built your lives.

In 2010, he invited priests to see the possibility of sharing the Word of God through their engagement with new media: the new media offer ever new and far-reaching pastoral possibilities, encouraging them to embody the universality of the Church's mission, to build a vast and real fellowship, and to testify in today's world to the new life which comes from hearing the Gospel of Jesus, the eternal Son who came among us for our salvation. In his Message for 2011, he specified that: The web is contributing to the development of new and more complex intellectual and spiritual horizons, new forms of shared awareness. In this field too we are called to proclaim our faith that Christ is God, the Saviour of humanity and of history, the one in whom all things find their fulfilment (cf. Eph 1:10). In this year's Message, the Holy Father was even more precise: Attention should be paid to the various types of websites, applications and social networks which can help people today to find time for reflection and authentic questioning, as well as making space for silence and occasions for prayer, meditation or sharing of the word of God. In concise phrases, often no longer than a verse from the Bible, profound thoughts can be communicated, as long as those taking part in the conversation do not neglect to cultivate their own inner lives.

The Pope's presence on Twitter can be seen as the 'tip of the iceberg' that is the Church's presence in the world of new media. The Church is already richly present in this environment - there exist a whole range of initiatives from the official websites of various institutions and communities to the personal sites, blogs and micro-blogs of public church figures and of individual believers. The Pope's presence in Twitter is ultimately an endorsement of the efforts of these 'early adapters' to ensure that the Good News of Jesus Christ and the teaching of his Church is permeating the forum of exchange and dialogue that is being created by social media. His presence is intended to be an encouragement to all Church institutions and people of faith to be attentive to develop an appropriate profile for themselves and their convictions in the 'digital continent'. The Pope's tweets will be available to believers and non-believers to share, discuss and to encourage dialogue. It is hoped that the Pope's short messages, and the fuller messages that they seek to encapsulate, will give rise to questions for people from different countries, languages and cultures. These questions can in turn be engaged by local Church leaders and believers who will be best positioned to address the questions and, more importantly, to be close to those who question. Amid the complexity and diversity of the world of communications, however, many people find themselves confronted with the ultimate questions of human existence: Who am I? What can I know? What ought I to do? What may I hope? It is important to affirm those who ask these questions, and to open up the possibility of a profound dialogue (Communications Day Message, 2012).

Part of the challenge for the Church in the area of new media is to establish a networked or capillary presence that can effectively engage the debates, discussions and dialogues that are facilitated by social media and that invite direct, personal and timely responses of a type that are not so easily achieved by centralized institutions. Moreover, such a networked or capillary structure reflects the truth of the Church as a community of communities which is alive both universally and locally. The Pope's presence in Twitter will represent his voice as a voice of unity and leadership for the Church but it will also be a powerful invitation to all believers to express their 'voices', to engage their 'followers' and 'friends' and to share with them the hope of the Gospel that speaks of God's unconditional love for all men and women.

In addition to the direct engagement with the questions, debates and discussions of people that is facilitated by new media, the Church recognizes the importance of new media as an environment that allows to teach the truth that the Lord has passed to His Church, to listen to others, to learn about their cares and concerns, to understand who they are and for what they are searching. When messages and information are plentiful, silence becomes essential if we are to distinguish what is important from what is insignificant or secondary. Deeper reflection helps us to discover the links between events that at first sight seem unconnected, to make evaluations, to analyze messages; this makes it possible to share thoughtful and relevant opinions, giving rise to an authentic body of shared knowledge (Message, 2012). It is for this reason that it has been decided to launch the Pope's Twitter channel with a formal question and answer format. This launch is also an indication of the importance that the Church gives to listening and is a warranty of its ongoing attentiveness to the conversations, commentaries and trends that express so spontaneously and insistently the preoccupations and hopes of people.