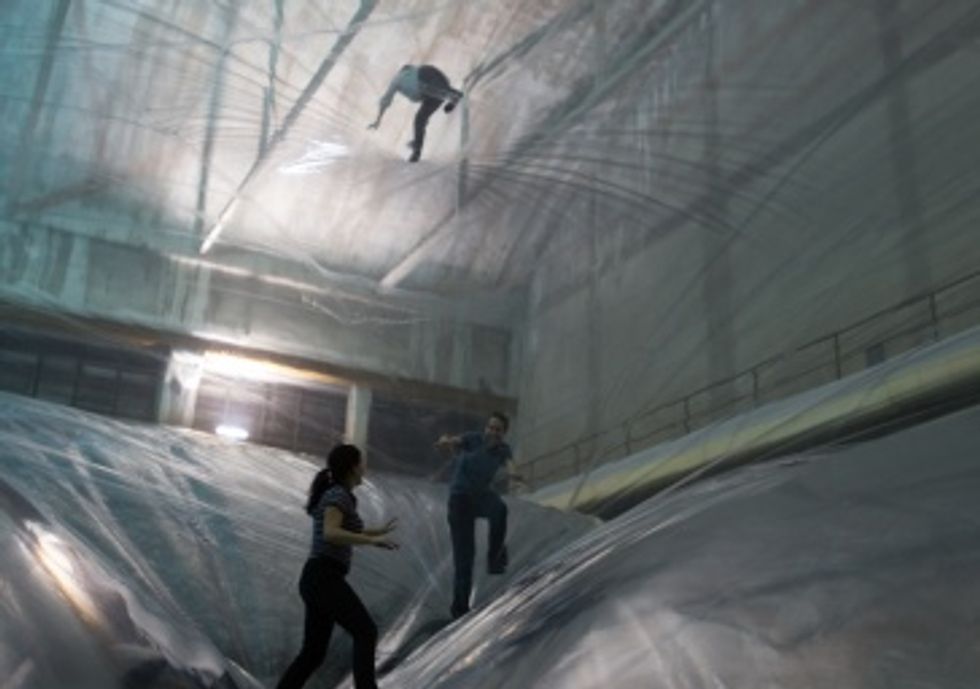 Climbing among thousands of bamboo canes (in Rome) or diving 80 ft onto a floating structure (in Milan): this is the new frontier of creativity. Thrilling and disconcerting

You have to sign a release of liability nowadays to see an art show. At least you do at the Bicocca Hangar in Milan, for the daredevil installation by Tomás Saraceno, and at the PAC, also in Milan, for Alberto Garutti's exhibition. Starting from December 11 you'll also have to sign a release to see the Big Bambú installation that the American twins Mike and Doug Starn are assembling at the Macro Testaccio in Rome.

See, in these cases, is an inadequate verb: the works are there to be touched, walked on, smelled, experienced with all the senses. In other words, they need «to be interacted with» by the public. And the signature required of what can hardly be described as the viewer is the signature for release of liability (in case of possible accidents).

At the Bicocca Hangar, hundreds of people wait patiently in line for a turn on the floating structure of transparent film stretched to a height of 80 ft. Indeed, On space time foam, the visionary work by Tomás Saraceno, cannot live without them. It is only when it is inhabited by the bodies of the visitors that it comes to life, acquiring fantastic shapes in continuous movement, with gleams of light that flash into the eyes of those who choose to remain on the ground (no one under 18 can climb it, and people who weigh more than 200 lbs. are also excluded).

Big Bambú, the installation that the Starn twins have brought to Rome for the 2012 edition of Enel Contemporanea, is hands-on art that needs people in it to come to life. Already tested in a smaller version at the Metropolitan Museum of New York, it was a huge hit with the public, becoming the fourth most visited exhibition in the world that year. The work consists of thousands of bamboo canes tied and fitted by a team of agile climbers who work in total spontaneity, under the watchful eye of the two artists. The public is invited to move around inside the work, experiencing the relationship with a solid object that is at the same time highly flexible and symbolically very pregnant.

«Our work embraces life and its randomness» explain the identical twin artists. «We like to create connections, because culture and society have always grown in this way. We are all moving around inside huge invisible architectures that at all times are unwittingly being created by each of us. The Big Bambú is the architecture of life».

There is a simple idea behind these works: that art today must appeal to all the sensorial capacities of people and that the energy released by those people is itself an integral part, a necessary completion to the works. In the case of Alberto Garutti, the words spoken or whispered by the public in front of his works are recorded and will be assembled to become a work of their own.

These are all exciting ideas, very new in form but basically ancient in substance. Even as great a painter as Henri Matisse dreamed of having the experience of standing, invisible, between his painting and the viewer, because it is then that the work really comes to life.

«We don't know if ours is a new way of making art» say the Starns. «We just know we want to make art people can get inside of, so that the visitors can discover all the interconnections that can be created. It might make you feel small, but you also feel you're participating in something immense». That is a very poetic intention indeed.