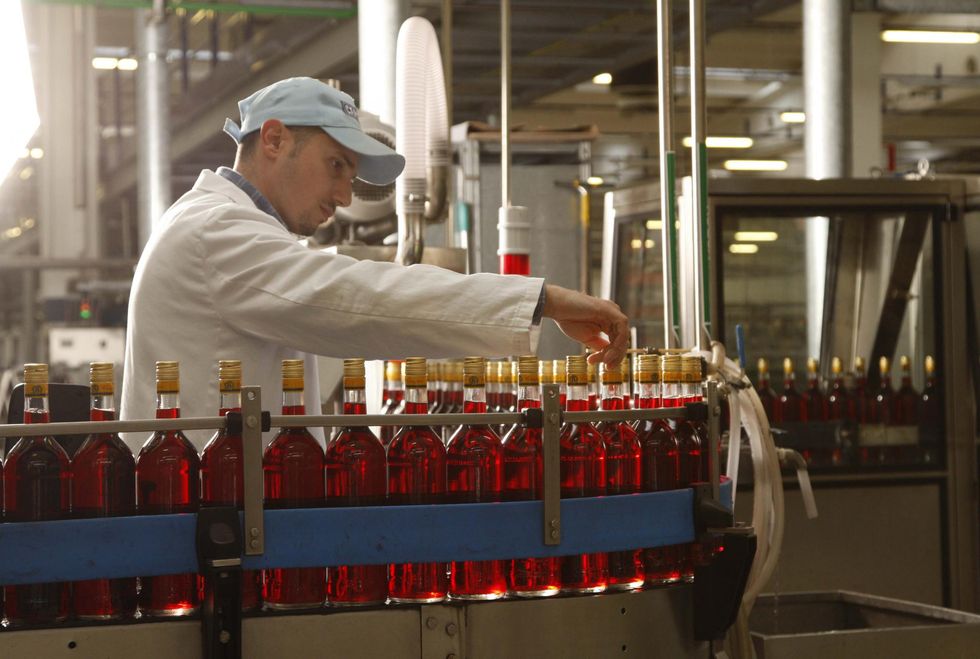 My thirst is for new conquests, says CEO of Campari

Travelling with Bob Kunze-Concewitz, the CEO of Campari who takes 150 planes a year in search of whisky, rum and mysterious beverages to buy.

As soon as he walks into the lobby of the hotel, Bob Kunze-Concewitz, CEO of Campari, is greeted with a resounding «ciao!» from a grinning gentleman getting ready to go out into the cold Moscow night dressed only in a simple sports jacket and jeans: «I just got here myself» his acquaintance tells him in Italian.

It's Mauro Mahjoub, one of the greatest experts in the world (he'd tell you «the greatest») of Negroni cocktails. «Now I have to run out and see a new bar, see you tomorrow at the fair». Barely two hours have passed since his Aeroflot flight landed and Kunze-Concewitz, who travels in economy class, has already thrown himself into the picturesque world that revolves around «spirits», hard liquor and cocktails, the heart of the Italian multinational.

What started out as a red beverage with a secret formula has grown into a multinational empire worth 1.5 billion euro, with headquarters in Sesto San Giovanni, north of Milan, and customers in 190 countries. Mahjoub, the man Bob just greeted (Italian mother, Lebanese father) manages a bar in Munich.

As a Negroni expert he has become a «Campari brand ambassador», «cocktail historian» and «barmeister»: basically what he does is travel around the world holding conferences on behalf of the Italian group and teaching barmen how to prepare one of the most celebrated cocktails.

He too is in Russia for the Moscow Bar Show, an international trade fair at which the most important producers of alcoholic beverages in the world take part, along with many famous barmen. After all, this is a country that is experiencing economic wellbeing for the first time, and wants to put its vodka-soaked past behind it and enjoy new products.

«People here have a fine palate» claims Kunze-Concewitz «and Russia is one of the fastest growing markets». Actually, the head of Campari didn't just come here for the fair, but to check how the distribution company it acquired a year ago and renamed Campari Russ is doing.

At noon the next day, the first journalists arrive on the 33rd floor of the hotel for Kunze-Concewitz's press conference: the direct entry of the Italian company is news even in Moscow. «We are active directly in 14 countries and now one of them is Russia» he explains «because we think we have excellent growth potential here. the Russian market now accounts for 3% of Campari's turnover: I think we can double that number in 3-4 years».

The journalists are interested in Kunze-Concewitz's thoughts on the new laws that will prohibit advertising alcoholic beverages in Russia: «We are in favor of conscientious consumption, we think it is better to drink less and better quality. We have low alcohol content beverages in our portfolio, like Aperol, that can meet the demand of a public in search of lighter alcoholic beverages».

The manager's optimism may appear surprising, not just because we are in the midst of a very severe economic crisis, but because alcoholic beverages have been targeted by the governments of half the world. Yet Campari seems to live on another planet.

First because the global market of its reference market (hard liquor and cocktails) continues to grow in spite of everything, gaining 2-3% a year in volume and even more in value. Second, because the Italian company has been advancing like a bulldozer for years, without stopping: it was selling 400 million euros a year, now it exceeds a billion and a half. In a little over 10 years it has tripled its business and quadrupled the value of its shares on the stock exchange. It is a progress that owes its success to a simple little formula. «Grow by 10% a year, half in domestic expansion, half in acquisitions» Kunze-Concewitz sums it up.

Until now they have achieved their goal, and that makes the shareholders happy, starting from Luca Garavaglia, the chairman and majority shareholder with his family, which owns 51% of the capital. «Having the majority in the hands of the family has turned out to be a good idea» admits Kunze-Concewitz «because our strategy needs time and we can't be governed by someone who is only looking at the quarterly results».

The alchemy between the ownership and the manager seems to work perfectly and Kunze-Concewitz travels the world non-stop to follow up the various local businesses and locate his next prey.

He holds an Austrian passport and has lived inTurkey,Germany, and theU.S., in Londonand in Italy. His wife is German and they have two children. He calculates that he takes about 150 planes a year. «I like to look people in the eye». Between times, he studies the market that, since it is still very scattered among many small producers, still offers a lot of interesting opportunities.

The manager explains it in the afternoon, during a meeting with his Russian employees: «In 17 years we have made 23 acquisitions. The latest, Lascelles DeMercado in Jamaica, the third largest company with a value of over 330 million, enables us to enter the rum market with one of the biggest brands in the sector».

The Jamaican company, on which the tender offer is now being made, will not only increase the turnover of Campari by about 260 million dollars, but also brings with it 2,000 employees (almost as many as all the rest of the group): «With the company we also purchased6,000 hectaresof sugar cane, since rum is a by-product of sugar». The result is that now a company with headquarters north ofMilanhas become one of the most influential groups in Jamaican society.

It is a singularity of Campari. «Like that of having made such important acquisitions in times of crisis. In 2001 the Italians convinced a certain Maurice Kanbar of San Francisco, the businessman who wanted to create a vodka without the «headachey after-effect», to sell his famous Sky brand. In 2005 it was the turn of Glen Grant whisky inScotland. And in 2009 Bob went toKentuckyand brought home the bourbon, Wild Turkey, a record transaction that cost 420 million euros.

Now Campari has 65 brands in its portfolio: some, like Cinzano, can boast over 200 years of history, others are more recent creations, like Aperol Spritz. And with a range of prices that goes from half a euro for a can of Lemonsoda to 4,000 euros for a bottle of rum aged 50 years.

Strolling around the Moscow bar show among the stands of the great protagonists of alcohol, with acrobatic barmen tossing shakers and bottles into the air, we can't help wondering whether sooner or later Campari itself won't become a prey.

Now it is the Italian company in sixth place in the classification world wide for spirits, a category headed by the giants Diageo (British, 10 times the size of Campari) and Pernod Ricard (French, 8 times), followed by a fleet of smaller companies. «With respect to the competitors» replies Kunze-Concewitz «we are leaner and quicker to reach decisions. We have a coherent strategy and a long-term vision: we acquire local brands and make them grow, with the goal of being among the top three in the individual countries. There are still a lot of opportunities out there: the first 10 groups in the sector have only 15% of the market, there are still a lot of independent producers».

If he had to give a definition of Campari, the manager would describe it as a Porsche: elegant and fast, but with a portfolio that holds both Volkswagen and Rolls-Royce. The last few hours Kunze-Concewitz has to spend inMoscoware devoted to a tour of the supermarkets: he picks four, from the hypermarket on the outskirts to the most chic store in downtownMoscow.

The manager checks the display of the bottles and the prices, with every now and then a glance at his Blackberry where he checks the stock quotation: JPMorgan just improved its outlook on Campari. But Kunze-Concewitz already has to focus on his next goal to increase the turnover by 10%: maybe it will be a matter of a few years, but another brand will end up in the hands of the Italian group. Maybe in Africa.

Bob Kunze-Concewitz, born in 1967 in Istanbul, with Austrian passport, has headed Campari since 2007.