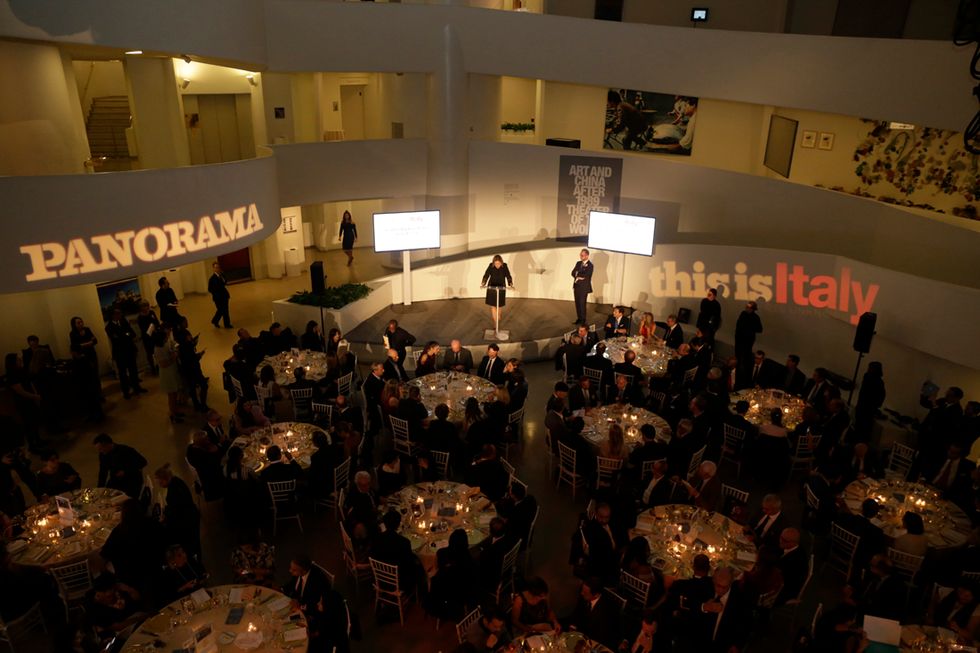 The Panorama dinner charity for Umbria in Guggenheim in New York

"Tenderness and resilience: the Umbrian people is this". A magical evening to support the region's great effort to start again

And undoubtedly, the "gala charity dinner" that concluded last night in New York, the three days of "This is Italy, parts unknown" would not have been better.

Of course, 220 participants will be admitted to the event, as well as those who won the Panorama Leadership Excellence Award.

But above all for those who responded to the appeal of the weekly magazine and generously donated the resources with which the Umbria Region will be able to restore the wooden Crucifix of the school of John Teutonico, a 15th century jewel damaged by the earthquake that overwhelmed the Cathedral of Santa Maria Argentea in Norcia, harming it.

First and foremost, the wonderful interior courtyard of the Guggenheim Museum designed by Frank Lloyd Wright, a roundabout under a white dome projected upwards.

Perfect for an unusual setting; and then the echoes of an exciting afternoon, because "here, in one of the largest cultural temples in the world", Mulè stressed,"we have listened to some of the best Italian artists of music: the Cameristi della Scala, from the Teatro alla Scala in Milan and the great tenor Vittorio Grigolo", for an extraordinary musical appointment, made possible thanks to the Lane, the colossus of the buildings it represents

But above all, it was the extraordinary purpose that decorated the evening: to flank Umbria, one of the regions hit by the earthquake in 2016, in its reconstruction and revitalization work, narrated in images, on every table of the roundabout, by a photo dedicated to an Umbrian village:"A land wounded by the earthquake", Mulè said,"but that, with stubbornness, has risen as it had already done after the past and I should ideally embrace each one of you for your help in the cause we support, working together with LoveItaly. Tenderness and resilience: the Umbrian people is this. We are honoured to have the governor of Umbria Region, Catiuscia Marini ".

And Marini, who joined the director on stage, presented his greeting and expressed his gratitude to an audience that, besides the most important Italian and American business community names in New York, included the presence of Vincenzo Amendola, Undersecretary for Foreign Affairs and the Consul General of Italy in New York, Francesco Genuardi.

Alongside Mulè in introducing the evening, of course, the Ceo of Italian business and investment initiatives (Ib&ii) Fernando Napolitano, co-promoter of "This is Italy", consistent with a commitment that dates back six years ago to support economic relations between Italy and America and with an old association with Panorama.

An introductory greeting that emphasized the exceptional artistic value of the venue, the Guggenheim Museum, was then addressed by Ian Wardropper, director of the Frick Collection in New York, considered one of the leading American art experts, who in turn won an Arts Award.

And while dinner began - after an aperitif by Ferrari - with the Sicilian cuisine of Gustoso and Caprai wines, the Leadership Excellence Award winners were preparing to receive their prize.

A series of personalities and companies that illustrate Italy and confirm in a thousand different ways the relationship between the economies of the two countries, which can certainly be strengthened but is already essential.

The first to get on stage was Andrea Pirlo, the world champion of football, today midfielder of New York City FC, after an inimitable Italian career, celebrated by a film that hypnotizes. After the footballer, who is experiencing a new season of rewards in the USA, all the other award-winning players took turns, one after the other, during the evening, each with the motivations for which the jury identified them. Starting with Sergio Zinni, president of the Fondazione Cassa di risparmio di Spoleto, an institution that has always supported the most advanced solutions of sustainable urban transport in the Umbrian town.

Then the vice-president of Urbani Truffles, Vittorio Giordano, in recognition of the international prestige that the group has given to an excellent product of Italian gastronomy.

So, preceded by an emotional video about the bull's bolids, Alessandro Farmeschi, Coo of Lamborghini in the USA: a brand that illustrates the best of the Italianity of the motor industry.

Immediately afterwards, an American on the podium: Robert E. Alger, president and managing director of Lane Construction, the American company of the Salini Impregilo Group, which worldwide is synonymous with high Italian engineering.