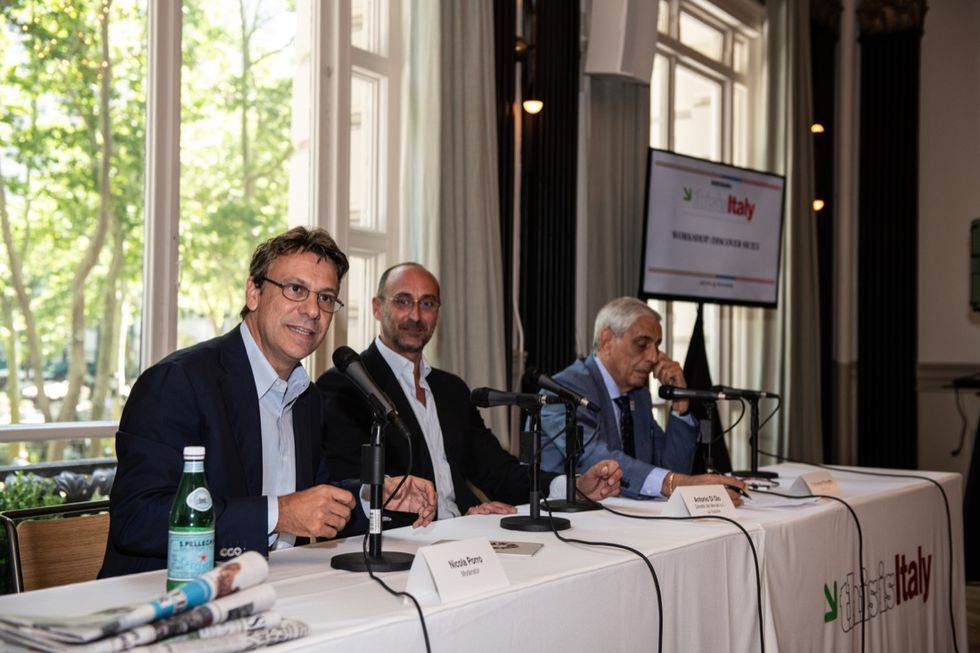 The ships continue to leave, from Italy to America. But those of today, those who from Sicily - thanks to the patronage of the Region - have metaphorically sailed to Manhattan to bring dozens of companies to Fancy Food which opens on June 30 in New York, are happy bastimenti, which export to the Big Apple and from it to all the States the best of Sicilian food and wine excellence, from wines to oils, from vegetables to vegetables, cheeses and sweets: In short, everything that has been delicious for centuries the Terra Madre di Sicilia - to cite the title of an exciting short film by Tommaso Dragotto - gives those who appreciate it.

And "Discover Sicily" was discussed this morning in New York at the event organized by Panorama d'Italia - This is Italy at the Wework space in Bryant Park and led by Nicola Porro.

At the table, two extraordinary testimonies of what Sicily can still and indeed more than ever represent on the world market: La Vucciria, an extraordinary entrepreneurial idea launched by Antonio Di Dio, with the help of his wife Diana de Concini, which has been deployed by setting up a system of more than 500 producers of the most famous agri-food market in the world, perhaps, to allow them to export the very high quality products they produce all over the world; and that of Tommaso Dragotto, founder and president of Sicily By Car, who with his Foundation has produced and promoted around the world a short film signed by director Pucci Scafidi - "Terra Madre", is the title - that really embodies the most passionate declaration of love that can be made to a territory.

"A few years ago, thanks to the generosity of one of our non-agricultural craftsmen, Badami, we gave the neighborhood the bright sign, precisely La Vucciria, which has now become its symbol, the icon"; God begins, "And from that first decision we thought of launching an initiative that is both promotion, logistics and marketing of Sicilian excellence. The label was designed by Roberto Cavallaro, and it's a variation on the theme of the stidda, the star, and we really started to create a system, gradually involving more and more subjects in a virtuous circle. Now it's finally starting an import platform in New York and a California, with our brand and our craftsmen. We will not make e-commerce but only traditional concept stores, because we are sure that they reconcile the choice of quality that we represent.

That quality - made up of centuries of history, culture and passion - that emanates like a perfume from "Terra Madre", thirty minutes of pure cinematographic art, which were presented to the audience again, in the presence of their moral author and financier, Tommaso Dragotto. "I am very happy to be here as testimonial and ambassador of my island, which I deeply love. Three years ago, on the occasion of Expo 2015, I and my Foundation decided to participate in promoting Sicily and Terra Madre products, the story of a man who wants to tell his love story with the island".

Emblematic is the phrase of Frederick II of Swabia that opens the film: "I don't send Paradise to God because I'm very happy to live in Sicily". And instead a phrase by Fedor Dostoevskji closes the film: "We live in paradise, but we don't care to know it", also pronounced by the warm narrating voice of Giancarlo Giannini, on texts and screenplay by Lorenzo Matassa and music by Giuseppe Milici.

From the Valley of the Temples to the salt pans of Mozia and the archaeological park of Segesta, passing through the emotional discovery of typical and unsurpassed products such as the caper of Salina, the black bread of Castelvetrano and the Zibibbo grapes of Pantelleria, here: all these factors really make "Terra Madre" an elegy dedicated to the beauty of an unforgettable universe, the Sicilian universe.