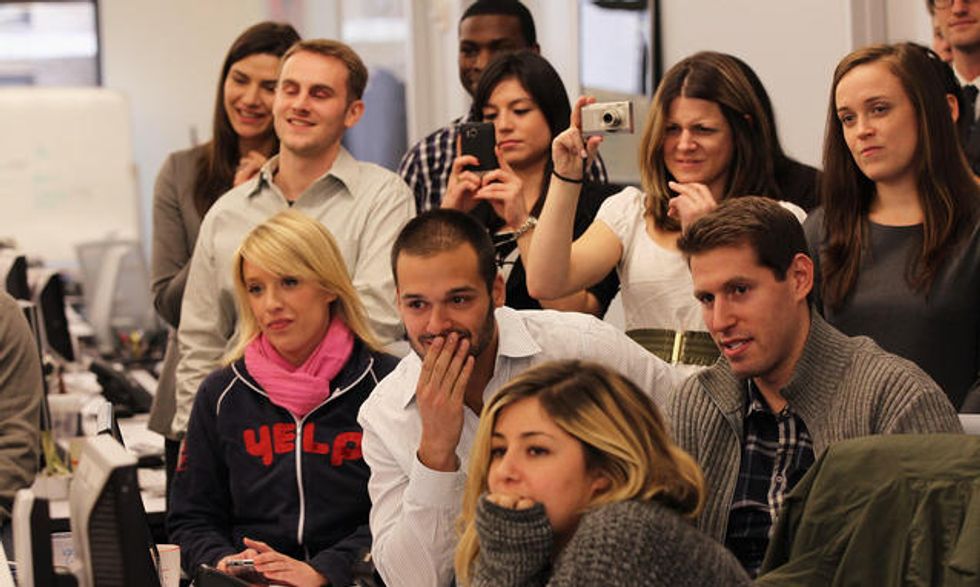 Start ups, with Fulbright Best you can

The countdown has started. The deadline to apply for the Fulbright Best 2013 scholarship is next December 4. Hurrying up is a must.

Elizabeth Robinson, former start-upper, able to guarantee herself a golden pension at 40 years of age or a little bit more than that, eclectic personality in the bubbling entrepreneurial world, made up for 80% by under 35, speaks clearly: " Take advantage of it, because it is worth trying. In five years we have trained 45 young people across the ocean. All of them have come back to Italy, and in a little while they have founded 26 start ups operating in the most innovative fields."

The address is not accidental: there are at least two hundred students of Bocconi University listening to her, arrived here for the event "Start ups creation and internationalization" organized by a pool of  "fools," as they define themselves.

Among them the most important: Fulbright Best, Innogest, Italian Business & Investment Initiative, Mind the Bridge, Mind the Seed, gathered together at Bocconi auditorium on the same day of the two most popular Marios in Europe (prime minister Mario Monti and President of ECB Mario Draghi) who were attending the inauguration of the Academic Year 2012-2013. A coincidence or an oversight? Who knows.....However the auditorium was overcrowded.

Fulbright scholarships are interesting. Basically, these are cheques offered by former US Ambassador to Italy Roland Spogli, enabling talented young people to fly to the USA and put themselves to the test with cutting edge courses and training in start ups  in order to come back, later, to our country and try the entrepreneurial adventure.

US Consul Kyle Scott confirmed what Mrs. Robinson said and gave credit to the three Fs (Friends, Family & Fools) for part of the technological success in the United States, as it is the first resource for young emigrants, but with brilliant ideas to put into effect.

Even the several  Bill Gates, Steve Jobs, Sergey Brin made use of it. But now there is much more choice and more channels. Fernando Napolitano, the organizer of the event at the Bocconi University, makes a list of the most important: Fulbright Best, of course, Italian Business & Investment Initiative (lauched two years ago by Napolitano himself,) with a seemingly simple idea. Selecting the best of Italy with regard to start ups and and putting them in touch with US investors and partners.

Among the other "talents-catchers" there is Innogest Sgr, the largest national fund for start ups with more than 90 million euro financial holdings, a project of Marco Pinciroli that exhorts with a provocation: "If you want to reach your goal, go abroad! Mindsets must change. Here in Italy, if you fail, you are a nerd. In US you are cool. Because you have "dared," and  you have what it takes to do it again."

The criticism is also towards the bankruptcy law, which should be completely readjusted.

Furthermore, among Napolitano's supporters there are, Intesa San Paolo, that with its "Start up Initiative" project and Atlanta Ventures fund that has an endless access to new established companies portfolio, Italian Angels for Growth which is the main business angel group in Italy; H-Farm, the technological incubator managed by Riccardo Donadon, M31, the accelerator from Veneto that specializes in biotechnologies directed by Ruggero Frezza; 360° capital Partner, the venture capital of Emanuele Levi, Fausto Boni, Diana Saraceni and Francois Tison, Dpixel the fund created by former Italian high tech golden boy Gianluca Dettori with Franco Gonella, who said " start uppers are Rock'n'Roll stars. But don't get them wrong, They are serious people, ready to work 24 hours a day for at least 7-8 years, earning much less money than  if they worked in the  several McKinsey&Co. Are you ready to do it? Think carefully about it! The password is sacrifice, but it is worth doing it."

"Definitely it is" Cosimo Palmisano, start upper, former Fulbright Best recipient, confirms. His company "Ecce Costumer", launched two years ago and aimed at decoding what it is written in social media by users of the most different companies in order to orient their choices, has just received a 15 million dollar cheque by a US fund.

Fifteen million dollars. Big money! Perhaps, the highest sum ever given by an American investor to a newly established Italian company, based in Latina, with tattooed developers, at least as much as their counterparts from California.

In the end Luigi Ferraris and Alessandro Fusacchia, gave their speech.

Luigi Ferraris is Chief Financial Officer of the energy giant Enel, that has allocated 15 million euro for a three year program destinated to start ups that operate in the energy field (the start ups to be financially backed are 18, they will get up to 650.000 euros each, free grant for a couple of years, then on the third year they will be incorporated in Enel itself.)

Alessandro Fusacchia, is the Economic Development ministry advisor. The Growth-Italy decree, with its 12 points regarding start ups, is the first in this field, in our country. By the end of the year it will become law. And so, Fusacchia and all the others will not have any excuses. They will have, at least, to try.

We must also mention, the Bocconi University student Marco Credentino, promoter of the "Youth" section of  "Italian Business & Investment Initiative," he is the one that has organized everything and he can be the bridge for those, among his collegues, that will dare to put themselves to test. It seems there is no lack of candidates. 30% of the start ups launched in Italy are headed by university students.