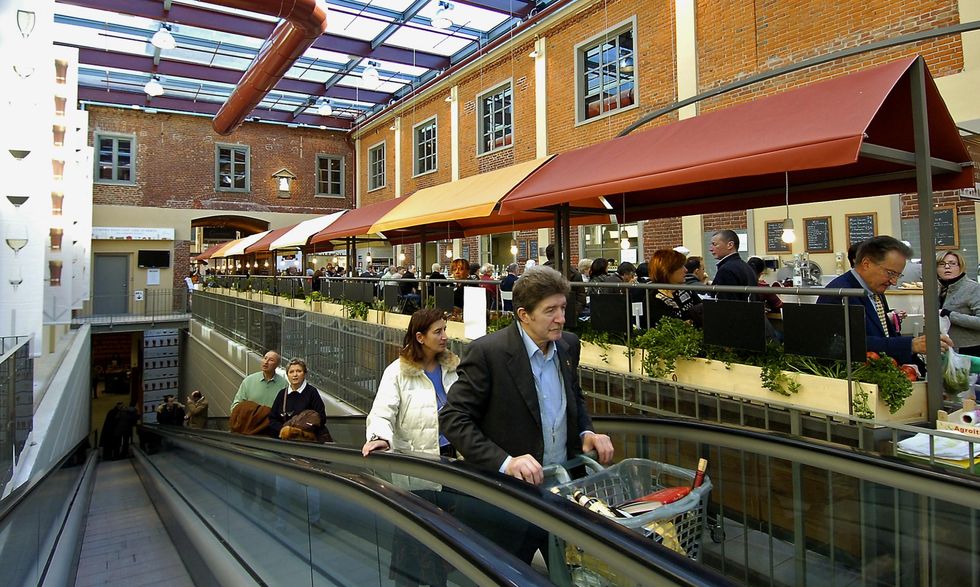 Eataly, If you’re not hungry, don’t come in here

It will be the biggest food temple in Italy. Starting June 21, inItaly's capital, it will feed 6,000 people each day. Panorama got a sneak preview of Eataly Roma and it followed the entire itinerary of the journey through the foods of Italy, where eating is culture and entertainment. And where the obvious doesn’t exist.

On the outside, all transparency and light through the large glass windows that attract your gaze and invite you in.

Inside, a food journey that extends over four floors: below, the "piadina" stand and a dive into this specialty flatbread of the Romagna Riviera; above, the colorful ceramic tiles that in the fish area depict Italy's great ports; and in the middle, walls covered with bottles, ovens, vegetable gardens and 23 food stands.

A rainbow of smells and colors that extends up to the all-white corner where buffalo-milk mozzarella is produced in the Casertatradition.

Right there, in front of the eyes of customers, as is the fresh pasta, bread and even chocolate and coffee. Nothing hidden away and, what's more, nothing to hide, because food is not only culture, it is also entertainment.

The protagonist of this new Eataly is the temple of food that will open in Rome on June 21 and which Panorama was offered a sneak-preview of.

Its patron, Oscar Farinetti, chose The Eternal City as the home of his record-breaking creation that brings together places to eat, places to buy and places to learn about quality food products.

A tried-and-true approach that has been successful in north Italy, Japanand  New York. "The capital," Farinetti explains, "has the right numbers for hosting the largest Eataly in the world: 4 million inhabitants and 10 million tourists each year.

And, until now, it only had small locales dedicated to the food sector." In short, just the opposite of this gastronomic behemoth which will be open Monday to Sunday from 10 am to midnight, feeding 6,000 people a day in a 17,000 sqm area and - last but certainly not least - providing work for 500 young people.

Its home is the Air Terminal at the Roma Ostiense rail station and it can even be accessed directly from one of the tracks.

Post-modern in style, designed by Spanish architect Julio Lafuente, it was built for the Soccer World Cup in 1990.

Little-used, it seemed destined to oblivion until Farinetti chose it and had its interior re-done without touching its rounded façade, following the same approach already used inTurin, Bologna and Genoa.

"InItaly," he adds, "we already have too many industrial structures, we don't need to put up new ones."

For neophytes, it's easy to enter the Eataly mindset. "We cook what we sell and we sell what we cook," explains succinctly the patron's son, Nicola, who is also involved in theRomeopening.

So, alongside the small restaurants with fresh meat, preserved meats, cheeses, fried foods (a first) and produce, are also areas in which to shop. This assures a continuous turnover of products - a guarantee of freshness and seasonality, another of the initiative's cornerstone values.

Where the strategy consists in amazing the visitor by leaving outside the door anything that is obvious. The bread isn't just any old type, it is prepared using sourdough starter over 30 years old and stone-ground organic flours.

Among the varieties of pasta, there is also an unusual fried type, that includes carbonara and puttanesca sauces. Baked goods are divided by region and there are even ones that use special, light doughs for health enthusiasts with a sweet tooth.

The Roman "osteria" is a shining homage to the Lazio region, involving the great cooks from the Castelli Romani area and their menus, such as Anna Dente from San Cesareo and the Cacciani brothers from Frascati.

Gourmet cuisine has its home on the top floor where special events and dinners will be organized with illustrious chefs. But above all in the Ristorante Italia, the reign of the young Gianluca Esposito: 29 years old from the Bologna Eataly who has demonstrated a culinary talent that is truly extraordinary.

But the kitchen is not just about chefs. "You don't get anywhere without the farmer and without study and experimentation," Oscar Farinetti notes.

This is why the structure also houses 40 "learning-emotion" areas where the story behind the products becomes the key. Here there are vegetable patches to be tended as part of food education for children, a room for tasting beer fresh out of the vat, an area about oil with a real olive tree, and another with "free wine".

"Free from added sulfites, pesticides and chemical fertilizers," Nicola Farinetti explains. And even a bookstore with ample parentheses of food-related fiction, not to mention two different versions of cooking schools: one in which to watch the chef at work and the other in which to get to work yourself.

Oscar Farinetti has a personal mania. He loves to lace his food with philosophy. Each Eataly has its own specific theme. While in New Yorkit is the supremacy of doubt over certainty, in Rome the connecting thread will be beauty.

Food beauty, of course, but also other potential forms, such as art, with the three authentic works by Amedeo Modigliani that will be housed within the center during its first year. And music, from classical to the great Italian singer-songwriters who will provide the soundtrack.

Even irony, with the exhibition, Mangiarsi l'Italia (Eating up Italy), a cross between food and political satire with 100 original cartoons ranging from 1861 up to the current day, replete with communists nibbling on children and fascists obsessed with castor oil.

After Rome, the next openings (in 2013) will be in Bari and Piacenza.

Soon, work will also begin on a second opening in Milan in the building of what is currently the Teatro Smeraldo that will close definitively at the end of June with a grand gala for which Eataly will provide the buffet.

"We decided on three levels with a suspended stage for live music every night," Oscar Farinetti tells us. When he was the head of Unieuro, he combined the sale of appliances with a slogan on optimism intoned by the great Italian screenwriter, Tonino Guerra.

Today, bringing together the best in small gastronomic enterprises under a single roof, mixing together the culture of food, up-scale eateries and a "fast good" philosophy, he is taking an even greater risk.

He is daring to rewrite one of the cornerstones of commerce: "The customer isn't always right," he says, and adds, "But Eataly isn't always right, either. But it is through this marvelous uncertainty that our harmony is created."