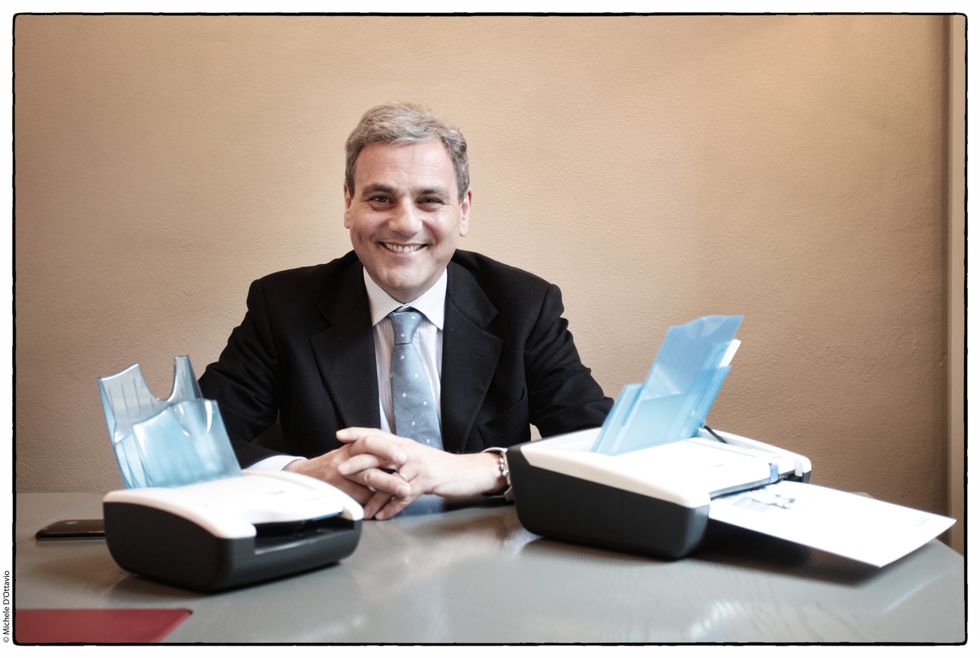 The check is gone (and the crisis too)

A Turin-based company dominates the U.S. scanner market for the digitalization of bank documents. «It all started with the attack on the Twin Towers» says the CEO of Panini

When the U.S. President George W. Bush signed Check 21 - the Check Clearing for the 21st Century Act - on 28 October 2003, the people at Panini, a Turin-based company that produces solutions for the digital acquisition and dematerialization of checks and paper documents, could hardly have imagined that their company would soon be the leader in the sector in the United States, with a market share in excess of 32%.

The decision made by the American government after the attack on the Twin Towers on 11 September 2001 gave an unexpected thrust to approval of the regulations for the recognition of the legal value of digitalized documents (making them equivalent to the hard-copy versions) and consequently also to the business of so-called «dematerialization».

«We opened our U.S. branch in 1995 in Dayton, Ohio. The American market is huge and highly attractive and we were hoping to find interesting new opportunities for the new generation of products of our company» Nicola Aliperti, CEO of Panini tells Panorama Economy. «Then the tragic events of 2001 led to the block of air traffic that caused losses of hundreds of millions of dollars also for the financial system. Why did this happen? Because when they are deposited at the bank, part of the checks are sent to clearing houses, where they are exchanged, and then shipped back to the issuing institution. With air traffic halted in a territory as large as the U.S., this operation was no longer possible in an established and efficient time frame».

This led to the decision of the American Congress to enact the Check 21 law, which coincided exactly with the launch on the U.S. market of the Panini bank teller's scanner, My Vision X.

Today, 75% of the company's turnover is developed in the U.S. where, just because of the Check 21 provision, almost 99% of the circulation of interbank documents now takes place solely via digitalized images. The growth has been exponential and has radically shifted the center of gravity of Panini, which now has an important part of its organization - about 40 employees out of a total of fewer than 100 - in the States, which have become nothing less than a real «domestic market» for the company.

Success was quick to come, considering that in 2011 the group reached 50 million euro turnover with a growth that, for the second year in a row, increased by 20%. But the group doesn't want to stop with this success. «Production volumes have grown considerably in recent years, reaching 130,000 units a year» Aliperti tells us. «We are selling in 42 countries, including Italy, and we have opened a new branch in Sao Paulo, Brazil, to follow the entire South American market, which we expect to be an interesting market in the near future».

The digital transformation of checks and other payment documents is a need that is perceived more and more, even at the European level, because it enables banks to improve and speed their processing activities, eliminating the costs of management and storage of hard-copy documents.

The European Union has promoted numerous initiatives to inform the member countries about this topic and the central banking institutions have begun to work on processes of dematerialization, placing particular emphasis on the legislative limitations and on the use of innovative technologies.

In Italy, for example, the total annual value of the checks in circulation amounts to about 850 billion euro, almost half the Gross Domestic Product. Only last year, according to data of the Bank of Italy, something like 315 million checks where handled, with all their effects on interbank processes and security transport of these precious bits of paper.

Without considering the fact that, with the support of this technology, checks can become equivalent to electronic transactions and this might also turn into a weapon in the battle against tax evasion and the submerged economy, by focusing on the traceability of transactions and discouraging the use of cash, as has already occurred in many other European countries.

«Checks are currently digitalized in the back office of the bank, but shifting it to the teller's cage or even to the client's home when the transaction is done via Internet banking, would accelerate the payment process, relieving the bank of this activity» continues Aliperti. «In addition, this is not only a matter of checks, because there are other documents that have to be digitalized. When we furnish an instrument that dematerializes the paper support at the time of the deposit, we thereby reduce the logistics and management of paper with obvious savings of costs».

Panini in the third millennium (no connection with the company of the same name that produces stickers, the CEO reminds us) is a solid international organization that has grown on the roots of the original family company founded in Turin in 1945 by Antonio Panini.

Over these first sixty years it has always kept its sights focused on quality, continuous research in the technological field and on full control of the supply chain, concentrating over 70% of the production in Italy and reaching, in 2010, a total of 500,000 scanners sold. In 2008 the Panini family sold 65% of the corporate shares to the J. Hirsch & Co. fund, a firm of strategic consultants operating in Italy, Luxembourg and Germany, to sustain its international growth even more.

«We want to be seen more and more as an engineering company rather than as a manufacturing company, because we want to have greater freedom of choice of the technologies, without the burden of costs linked to the management typical of production plants» concludes Aliperti, who joined the company in 2009. «This is also why the current international economic situation doesn't worry us all that much, because the signs we are seeing are very encouraging with regard to the increasing awareness of the world market about the importance of dematerialization. On the one hand, we are always very cautious interpreting what is happening, but we are in any case very optimistic, because we seen a broadening of the opportunities for our business where we are still a good step ahead of our competitors».

From above, an employee performing an inspection and a Panini scanner; the company employs 100 people, about 40 of them in the United States.

75% : The portion of revenues earned by the Turin-based group in the United States. The company sells in 42 countries