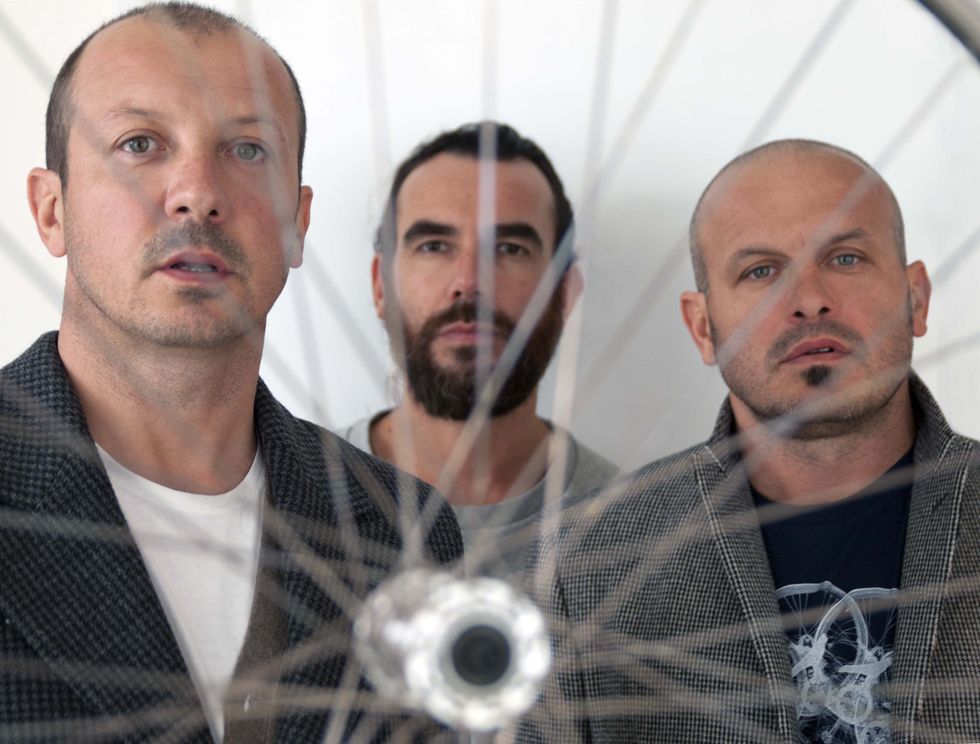 Bicycle built for two (or more)

They hire. They grow. And they are most popular abroad. They are the small manufacturers of custom bicycles. Which are often considered objects of design

Even bicycles have become chic. In the home of the most famous two-wheeler designers and craftsmen in the world, custom bicycles are often just around the corner. But it is in the small cities and towns of the Po River Valley, above all, where these conveyances leave their mark.

Made by small, even tiny, companies which rarely turn out more than one thousand bicycles a year, thanks to current trends, they seem to be in excellent health. "We are hiring," confirms Gianluca Bernardi, AD of Bernardi Componenti per Ciclo, the company based in Forlimpopoli (Forlì-Cesena) which owns the Cigno brand.

"We produce 600 bicycles a year and, despite the crisis, demand is on the rise." With their classic styling, Cigno bikes are recognizable thanks to their bright and shiny chrome frame and range of accessories. "Our primary business is the sale of bicycle parts, so we can count on companies that we ask to make parts exclusively for our bikes. This year Brooks - the company that makes the best-loved and elegant bike saddles, created special ones in green, bordeaux and navy blue leather just for us."

Cigno bikes have been on the road since 2007 and are the offspring of the legendary padlocks of the same name that in the 1950s were produced to the tune of over one million per year. "We acquired a famous brand name that was in the process of disappearing and then built a one-of-a-kind bicycle around it."

Depending on the model, Cigno bikes cost between 660 and 1600 euros. Forty percent of the company's output finishes abroad, above all in Germany. "There, the image of Italian bikes is very high, as is the expertise of our employees. But it's the same throughout the world. Recently, we discovered that in Russia Cignos are considered design objects to be put on display in the office. Requests arrive by mail or telephone and we always maintain direct contact with the customer, so the bicycle begins to come to life only after significant exchange of ideas."

The trendiest bikes are not only the result of a padlock, but even informal banter between friends in the local bar whose actual jobs are in quite different areas. "We wanted a nice bike to go to work on, or just to hop down to the bar," explains Stefano Seletti, founder and co-owner of Abici. "Nothing that existed satisfied us. Major producers had left this segment to its own devices. So, we chose a minimalist look, mixing retro with hi-tech detailing. People liked our prototypes, so we took the plunge." That was in 2007.

Today, Abici produces 1,200 bikes per year with billings of over 500,000 euros, most of which abroad: "The United States, Scandinavia and France are all ahead of Italy, where the idea of designer bikes has yet to take root," Seletti continues. "Everyone loves our attention to detail, the custom-tailoring and the absolute quality typical of Made in Italy craftsmanship."

To reach these standards, Abici forced a small producer of frames in the Padua area to re-open its doors. Not flashy, but substantial, they are the product of investment in nuts and bolts and the use of three layers of varnish over a coat of rust treatment to protect the frame. "We want to make bikes that are indestructible, that can be passed down to children and grandchildren," Seletti stresses. Abici has also created a limited line of accessories and clothing in loden ranging from jackets to saddlebags. "They are waterproof and breathe - loden cloth was the forerunner of Gore-Tex. And it is much more elegant," Seletti concludes.

Similar but more recent, is the story of Italia Veloce, the Parma-based company founded in 2010 thanks to the passion of three friends, lovers of bicycles but involved in design, architecture and communications. "We decided to give ourselves a name and image tied to Futurism because we were born during the year of the 100th anniversary of the founding of that movement," explains Massimiliano Rabaglia, one of the founders.

"It is no accident that our bikes are called Magnifica, Audace, Ruggente and Ribelle [Magnificent, Audacious, Roaring and Rebel - eds.]. Actually, no two are alike and each client can choose from a wide array of parts. Some even ask us to mount vintage saddles or detailing which we find in wholesale warehouses or flea markets."

During its first year of business, Italia Veloce billed 400,000 euros, once again mostly in foreign sales to Northern Europe and Japan. "They discover us on the Net. Then they get in touch, we exchange messages and invite them to create their own velocipede using the configuration software on our website."

Many also come to the shop in Parma to be present personally at the birth of their bike and, often, to suggest changes as work progresses. In 2011, the company expanded its range of bicycles with the Tender To fold-up bike, made exclusively for Sessa Marine boats.