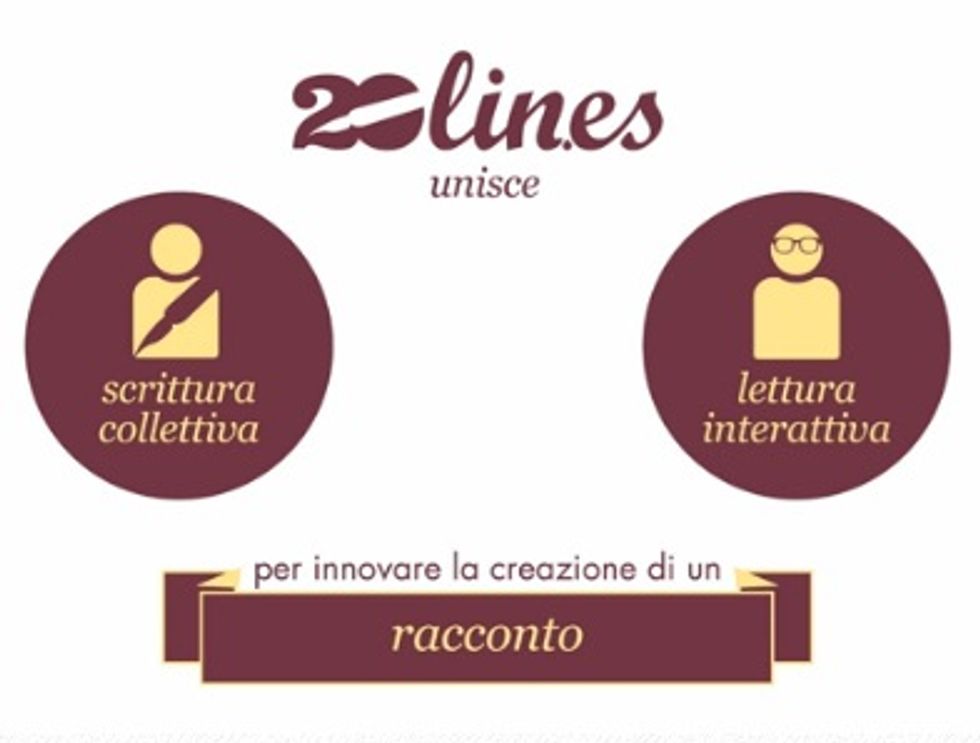 The Italian start-up that could change the publishing industry

20 lin.es is a social publishing community for collaborative writing. There are few and simple rules: everyone can write the first 20 lines of a story that will be online for 20 days. Someone else can actually continue the story for other 20 lines until a maximum of 6 sections. The story with the highest approval from users will be published and become an e-book. Therefore a story could eventually have infinite plots and most of all the stories can have multimedia supports like images, videos or web links. Famous authors such as Giorgio Faletti, Paola Calvetti and Mimmo Cangemi have already taken part in the community.

Two years ago Alessandro and Pietro talked about the possibility to create a collaborative writing community, then teaming up with Francesco and Marco. The four launched the beta version of 20lin.es during last year edition of the "Salone del libro" in Turin, and that was just the start of their story. The beta version, which was online for about a year with several releases, gave them the chance to understand that there is a great potential for collaborative writing, but particularly that there is a strong interest from both writers and readers.

Indeed, the community helps unknown writers to be noticed and this could change the entire process in the publishing industry making it more "democratic".

The progresses since last year, when they were incubated by H-farm, have been incredible. They now have their own offices in Milan with a team of 7 people working full-time on the development of the project. Moreover, last week they got a ? 250,000 investment from United Ventures. They will be able to achieve important milestones in the next nine months with this infusion of capital. They will launch the English version of the website that will certainly increase the number of users, create iPad and iPhone apps and most importantly build partnerships within the publishing industry.

Even if the American capital market seems to be more suitable for investing in sophisticated ideas like 20lin.es, they decided to develop it in Italy facing all the possible difficulties that could arise during the process. In order to do it they needed a competent and close team. They were able to gather the right persons and competencies using the limited resources generally available to start-ups. There is still room for improvement but there are writers, readers and dreamers ready to write their own part of the story.