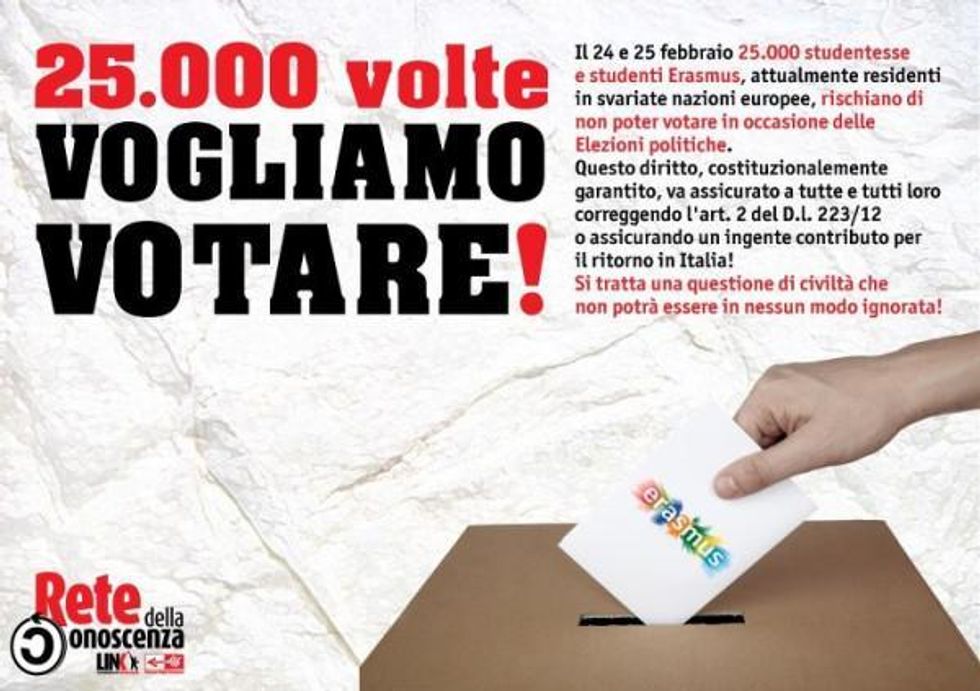 Erasmus student of Italy protest regulations that prevent them from voting

Few weeks ahead the political elections, the exclusion from voting of Erasmus exchange students raises polemics in Italy.

Several politicians and deans are, in fact, taking the field, to support the cause of some 25.000 exchange students regarding their right to vote while studying abroad.

The Democratic Party, led by Pierluigi Bersani, has submitted a point of order to Minister of Interior, Annamaria Cancellieri, and Minister of Foreign Affairs Giulio Terzi, in order "to grant the right to vote to about 20.000 Italian students currently attending an Erasmus study programme abroad." The motion urges the two ministers to get started establishing the eligibility to vote-by-mail for students abroad as it happens in the other European countries.

Under secretary of Education, Elena Ugolini, informed, later, that the government was discussing the issue "This morning I spoke to the Minister of Interior," she said, "the right to vote to the 24.000 exchange students is something we must grant and we are working on it."

Despite this statement, few days later, the Italian Ministry of Interior said "The right to vote is currently granted to those who are registered in the electoral lists of Aire (Registry of Italian citizens residing abroad) only, these lists do not include people living abroad for less than one year. The creation of  new specific lists is technically impossible right now, as an ad-hoc law would be required, there is not time enough to do it ."

The polemic involves also all those Italians residing abroad and that are nor registered in Aire. Over the past few years, due to the economic crisis and unemployment, the number of young Italians going abroad, to look for a better future has enormously increased.