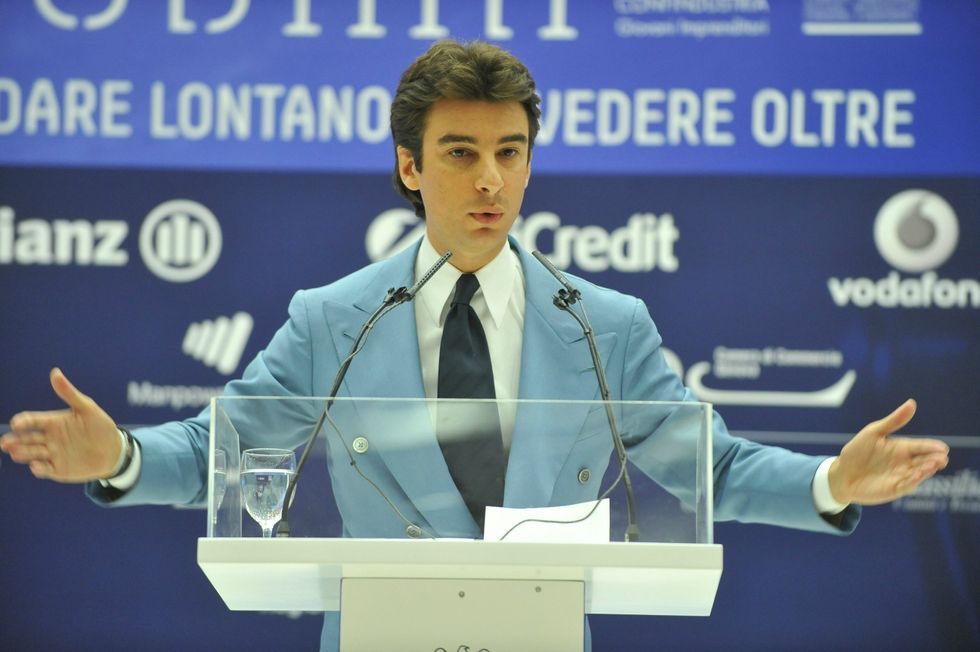 The italian leader of young businessmen: Make way for youth

“More could have been done,” states Jacopo Morelli, president of Confindustria’s Young Businessmen. “Especially for the younger generation that is the guarantee of our country’s future. And they’re tired of waiting.”

Allow us to grow. For our, and above all, your own good. It's in everyone's best interest that Italy, the "Bel Paese", finally become a country for the young because what's good for the young - the ones who will be paying your retirement pension - is good for everyone. These are the words of Jacopo Morelli, 35 years old, a first-generation businessman in the furniture sector, a "pragmatic idealist" infected with the bug of doing business he caught 11 years ago in Silicon Valley. Less than 70 days ago he became the president of Italy's young businessmen with a specific program: just a few reforms to be made immediately in order to bring Italy into synch with a generation "born after the fall of the Berlin Wall and raised on bread and internet and who have studied abroad and take off for London on 20 euros", but who, because of generational egoism, are relegated to the sidelines, waiting for jobs that don't exist. Utopian? It's actually a dream that could become reality, especially if you're young and an optimist. "The way you should be," notes Jacopo Morelli. "Also because there's nothing worse than a young pessimist."

To tell the truth, President Morelli, there are a number of reasons for being pessimistic. Starting with the new budget package that has just been approved by the Italian government.

Let's start from the budget package, if you want. I agree it was necessary to aim at balancing public expenditure. Just as it was wise to underscore the goal of balancing public debt by 2014. But, as everyone knows, this was only the immediate goal. We won't get very far if we don't get back on the road to development that has been lacking for over ten years. It's obvious that austerity alone is not enough. Especially if, once again, the measures are based more on increasing revenue than reducing expenditure. At this rate, as the markets are also well-aware, we certainly can't pay back the 1,897 billion in public debt we are burdened with.

More cuts in spending, more incentives for development. Easy to say, but difficult to do. And yet, perhaps for the first time, the budget package contains a measure that reduces taxes to 5% for companies owned by young businessmen. It seems like a good start.

Unfortunately, I have to contradict you. The measure you mention provides some breathing room to young people who want to start their own businesses, not those who want to do business. Against our advice, this provision is limited to individuals and those with personal VAT tax codes, but not to capitalized companies. And yet, these are the companies that normally have an impact on growth, provide employment and make investments at a certain level. We will continue to fight to have this measure extended to capitalized companies.

In your opinion, why was this restriction made?

Out of the fear of providing incentive to a certain sort of "moral hazard". Many companies, it was thought, would have tried to take advantage. But I don't agree. First of all, because we now have enough tools to uncover violations and, second, because, in any case, the benefits would have outweighed the risks which must be run if you want to strike out in a new direction.

Well, no. I have to admit that the budget package did also provide for a number of incentives involving venture capital that can benefit young businessmen. But it was too little, way too little. Italy is not yet a country for young people. In fact, it is a long way from being so. And this is a big problem because once again, extreme caution has won out over courageous action. A philosophy which, at this rate, will condemn us to prolonged suffering. We persist in following the old rules without thinking about the younger generation, and this is a big mistake. The things that are good for the young are good for everyone.

Just what we needed, generational conflict. Italy is already divided enough, don't you think? Do we really need provocative measures such as the retirement age being pushed up to 70, at the latest by 2020, and not (as the package calls for) by 2050? Or claim tax cuts at a time when resources are short?

One thing at a time. Some decisions can be made in the interest of all. But one thing needs to be very clear. It's true, resources are scarce, but this is also the price of short-sighted decisions made in the past: the disaster of very early retirement, blindfolded bureaucracy, waste and the lack of dynamic policies. In speaking about resources, especially when they are scarce, deciding what to focus on and what to invest in is a political choice.

Let's start from what reforms are possible.

First of all, tax cuts to young businessmen and women.

Great. And who will finance this cut in revenue?

First off, let's look at the figures which are often ignored. The first thing that emerges, involving employment, is the low use of women and young people compared with other countries: 56.9% compared with 78% in other OECD countries. If we take a closer look, we find that for adult males, between the ages of 27 and 55, Italy is in line with other countries. The two gaping holes are young people and women. In Italy, out of every five unemployed people, four are young. In Germany, the level is 1.4. This figure cannot be ignored when drawing up tax reform. Also because it represents our most precious resource - and immediately available one - to increase productivity in this country.

Are you convinced that such an operation could trigger new activity?

There is one country which, with an aggressive and appropriate use of fiscal policy, has created a veritable start-up boom: Israel. Today, Tel Aviv has 125 companies quoted on NASDAQ. And note that the new companies are also the most efficacious ones from the standpoint of creating new jobs. Existing companies tend to constrict new employment, while start-ups are more labor-intensive. A study by the Kaufmann Foundation calculates that in the US, start-ups offer 3 million new jobs each year and existing companies cancel one.

There is still the thorny problem of financing. Welfare, as it is currently conceived, eats up available resources.

The entire system needs to be re-examined because it suffers the influence of a pyramid-like Fordism. If everything assigned in the form of deductions and wage relief were to be redistributed from fathers to sons, it would allow many more to leave home and start their own lives. Naturally, young people must also be willing to reduce their lifestyles.

And then there are the payments into the system.

The contribution wedge for those entering the job market must be reduced. This can be done by raising the retirement age - towards the age of 70. As businessmen, we are well aware that over age 60, people can still contribute much in terms of experience and expertise.

In Germany, for example, mature workers are assigned to training with shorter hours and lower salary, given that less money is required at home because children have also begun to work.

Perfect. This is a Gauss curve: you enter the workplace with a wage commensurate with a learning phase. This continues to rise to a peak and then begins to fall. This is a mathematical model used to trace a long-term course for the entire country. Much better than embarking on a ship that navigates by sight, ignoring vital answers. Such as those involving energy, for example.

This goes for employees, but what are you asking for to feed the new generation of businessmen?

It would be important to reduce the regional business tax IRAP on start-up companies. Some people are working in this direction. In fact, the region of Sicily adopted just such a measure. We hope others will follow their example in order to create healthy competition between regions. After all, they only have to profit by it. With IRAP at zero, more solid companies can be built. On the other hand, if colts are crippled before they can gallop, all that's left is a pile of bones.

You are also fighting to abolish the legal validity of degrees. Which is nothing new.

That's true. Italian president Luigi Einaudi even tried back in 1947. But let's not pretend the problem doesn't exist: all universities are not the same. And exactly because resources are limited, we must differentiate between centers of excellence that offer high-level education and research, and the others. And we must promote a pragmatic approach to work. The educational system calls for a program of 3 + 2 years, so the final two years should involve work experience within companies, with tremendous advantages for all parties. This is what they do in Germany.

In short, four reforms as conceptually straight-forward as they are complicated from the standpoint of consensus. What will the unions say?

We are mobilizing to ally ourselves with those unions most aware of the problems of equity for young people and women. And I am certain that they also see this as a very important issue.

The person who doesn't is the treasury minister. Giulio Tremonti can't be very happy about all these cuts.

Extending the retirement age would free up 60 billion euros which, invested, could raise GDP by a point. And there's a lot you can do with an extra GDP point. Also because, at the same time, BTP earnings would drop.

In short, not a utopia.

In our opinion, growth and the question of the younger generation are two sides of the same coin. The alternative is slow agony. Without any medals.