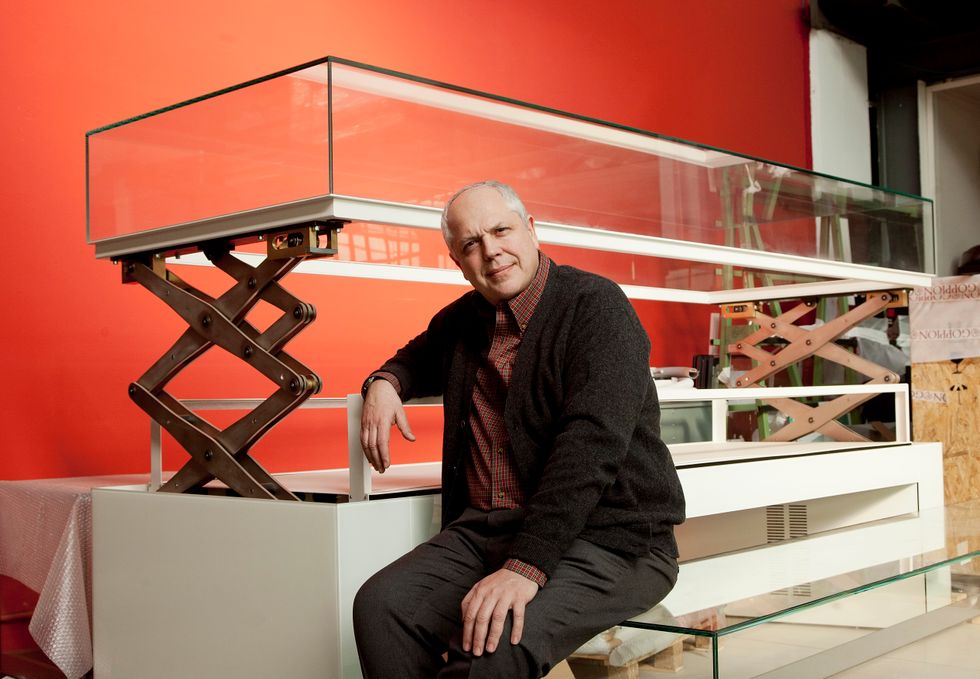 With his glass showcases, Sandro Goppion has become no. 1 in the world. And after having secured the Mona Lisa, the Louvre is now entrusting him with doing its new Islam pavilion

They're just back from Paris where they celebrated their 60th year of business at the 18th-century mansion of the Italian Embassy. A very prestigious venue for this small company from Trezzano sul Naviglio in the dreary Milan hinterlands. But there's good reason for it. The Goppion company is very much at home in France. Especially at the Louvre, because for over a decade, the world's most famous museum is among its top clients.

The company designs and builds showcases for museums. Or, to be more precise, sophisticated preservation and exhibition systems with the highest technical and safety specifications. For example, ten years ago, the Louvre management entrusted them with the task of putting the Mona Lisa under glass.

So, to protect the Mona Lisa's smile from earthquakes, thieves, vandals and terrorists, they had to create a shatter-proof sheet of glass that was completely transparent and glare-free and bigger than 2 x 3 meters, make a hermetic hinge that could support over one ton in weight, and invent a humidity regulation and air filtering system that would keep out the polluting substances brought in by the over six million visitors that crowd in front of Da Vinci's masterpiece each year ... just to name some of the challenges.

"A result made possible by the experience accumulated working in museums throughout the world, the network of highly-specialized people who collaborate with us and, last but not least, the contribution of the engineers at Milan Polytechnic," explains Sandro Goppion, 57, since the mid-1970s at the head of the family business that, today, is no.1 in the world in its sector (50 employees and 15-20 million euros in billings a year, depending on orders).

The list of what they have done is staggering. The Venus de Milo, Da Vinci's Vitruvian Man, the Dead Sea scrolls (900 manuscripts, the earliest dating from the 2nd century BCE) and the Hammurabi Code (collection of Babylonian laws from 1750 BCE) are just some of mankind's treasures protected by their glass safes.

They are installed in 300 of the largest museums in the world, including the British Museum in London, the Musée d'Orsay in Paris, the Museum of Fine Arts in Boston, the Museum of Islamic Art in Cairo, the Shaanxi History Museum in Xi'an, the Acropolis Museum in Athens and the Pinacoteca di Brera in Milan. Cases totalling over 50,000 square meters of glass.

And there is no lack of new orders, despite the fact that even abroad funding for culture has dropped. Currently, forty Goppion technicians are working at the Louvre to set up the big new pavilion dedicated to Islam (4,000 objects that will be housed in the cases of this Milan company), and for the ambitious project of the Louvre museum in Lens.

Others are busy in France, Thailand and the United States. "We are negotiating a major, 6 million euro contract in Washington" Goppion lets slip. After having put under glass the painted murals of the Tang Dynasty in the Shaanxi Museum of History (a contract worth 2 million euros), Goppion is now working on wrapping up another agreement with the Chinese government.

In short, the effects of the crisis are not that evident in Trezzano. "Last year we suffered somewhat because of problems in the United States," is all Goppion says. It must be noted that their billings, 90% of which come from abroad, are well-distributed: half from Europe (France, England and, somewhat lower, Greece) and half from the rest of the world (United States, Canada and North Africa in the lead).

And the trend, which showed a 50% increase in the last five-year period, continues to be positive, while their competitors (especially German) don't give them that much cause for worry. "Our strong point," Goppion explains, "is that for the last twenty years we have reinvested all our profits, about 10-15% of turnover, in research and development so that we can remain competitive."

But there's more. From the standpoint of quality and cost control, the company takes full advantage of its established roots in Milan's industrial area. "In addition to our regular employees, we have 50 independent artisans who have worked full-time for us from the beginning, plus we provide work to over 200 people in shops in the area we have selected over the years," he explains. And finally, there is the company's organization that has been adjusted and honed over time to be able to handle the complexity of up to 30 contracts at a time. "Independent, self-managed groups that are autonomous, except for some connecting functions such as purchasing, engineering and legal considerations, the latter entrusted to my wife, Patrizia," Goppion adds.

There's no doubt about it, giant steps have been made since Treviso engineer Nino Goppion, along with four employees, opened a shop in Milan in 1952 to make showcases. "It was during the period of post-war reconstruction and he realized manufacturers would need products to display their merchandise in order to win a market share," says his son, Sandro. Giovanni Ferrero was one of the first to agree with him, to the extent of ordering 200,000 cases from him to display his chocolates in stores.

From individual display cases he moved on to full displays for stores, jewelers and drug stores, in particular. But once the boom years had passed, the company went through a difficult period, and this is when the reins passed to Sandro Goppion who had to leave aside his aspirations for a university career in political science.

But his background in history and philosophy and his familiarity with art exhibitions and shows allowed him to identify the museum niche. "My first job was the cases for the Ivory Room in the Bargello Museum, in Florence," Goppion says. "But the leap in quality, the cornerstone of the company, was the 1992 contract for the Crown Jewels in the Tower of London." Once MI5 ascertained that the Italian cases were capable of protecting such jewels as the Koh-i-Noor diamond, the company found the doors of the Louvre, British Museum and Getty Research Institute wide open.