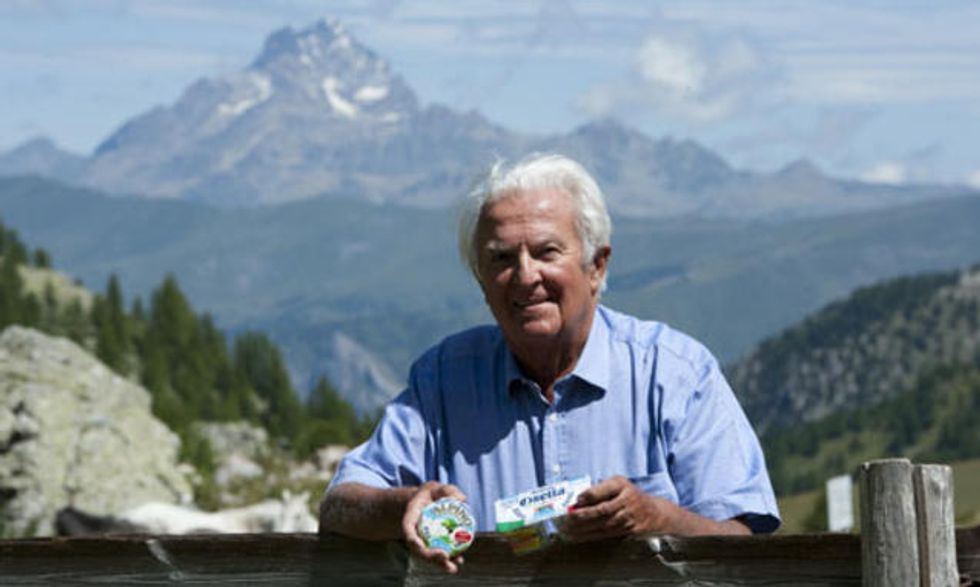 Fattorie Osella, even cheese is a source of innovation

Friendship with Ferrero and Armando Testa, rivalry with Biraghi. From Piedmont to the US under the sign of tradition and innovation

Dario Osella senses things through touch and taste. Not through sight, sound and smell. The synthesis of this man who in 1952 founded Fattorie Osella dairy?"creators of robiola cheese and the ad with the wagon of Grandfather Giacomo that rolls along to the strains of ancient Celtic tunes?"lies in one particular movement: the click of his tongue against his palate. He does this when he talks about milk, cream and cheese. And more softly when talking about the loves of his youth and his wife's legs.

And here he is. The former kid who inherited the family tradition following years spent cussing out the priests at the boarding school in Moncalieri and his university professors, but also winner of the Innovazione Tuttofood 2013 prize in Milan for his ìdoppia bont?î (doubly-good) product. And he still has the energy to come up with new ideas. ìWe have to go to Russia and America,î he repeats, pestering the top management of Kraft Foods (today Mondelez) with telephone calls, the company with which, "through a handshake", in 1984 he sealed a partnership agreement.

Today Osella is one of the very few, if not the only Italian company that has retained 49% ownership of the company despite becoming part of a multinational that is no.1 in the food sector. With billings of 50 million euros, it employs 150 people, processes 120 tons of milk a day and produces 21 million robiola cheeses alone. The rest of its output includes scottarelle, the moldy Alpino cheese, Caprini, Linea and many others. "I understood at the beginning of the '80s that I had to grow and that I couldn't do it alone,î Osella explains. ìMy son Gino inundated everyone with faxes and Kraft Foods responded.î

Bringing together two souls in a single body. America and Piedmont, communication and reserve, mass production but with the understanding that it would faithfully copy the movements of manual and artisan production, and injection of modern marketing, even if Osella still knows personally the herdsmen who sell them milk. He calls them by name. And he's always present at every baptism, wedding or funeral. He goes to visit them on Monviso for a chat and refuses to listen if someone suggests he buy the right quantity of milk on the spot market: a short and sweet "No" is his response. "Milk is a resource. We have a delivery contract and if or when there is a surplus of milk (for example at the weekend when production is reduced), we are the ones who sell it on the market, despite the fact we lose money.î

The Osella story is part of the history of Piedmont's early successful industrialists, those who created the Ferrero giant with its Kinder and Nutella products, as well as Lavazza and Fiat. "One day, I met the local priest leaving the hospital who told me about the visions someone he knew had had of Heaven. I understood that it exists and that it is beautiful, but I immediately thought that it couldn't really be so without an angel, a beautiful woman or a good cup of coffee. I said something to a friend of Armando TestaÖî. Who knows if this didn't become the idea behind the famous commercial with Bonolis and a cup of espresso coffee among the clouds.

In terms of Fiat, Osella?"although not a mechanic?"was also able to capitalize on the wave of workers arriving in the area. "Piedmont became filled with emigrants, Italians from the south. I took advantage of this by bringing up a cheese maker from Naples and I put him to work making mozzarella. Did you know? I was the first to mass produce it here in northern Italy.î Before Galbani and Invernizzi? Not actually, but Osella would have liked to. With the same energy with which he fought the milk war with his old rival Biraghi (who make the biraghini), the same company that he is in good business relations with today.

Given this rich past, even the US multinational agreed to preserve some of Osella's good, healthy habits. It approved the milk delivery contracts and even saved the swallows' nests attached under the eaves of the Caramagna plant. They were scheduled to be removed for renovation of the factory, but Osella talked to LIPU, the Italian league for bird protection, and he became a dedicated bird enthusiast, obtaining from Kraft the ìhygienizationî and protection of the nests using special protective aluminum shelves.

Naturally, all this is not just the result of the bonhomie and seductive qualities of the sprightly Osella. Behind it are also the robiola cheeses that account for over half of the market, while the Osella fresh tomini represent 2/3 of the pie. But 30 percent of billings are in deli products and Osella remains a resource. "Do you know how I came up with the idea of robiola flavored with truffles, olives or tomatoes, olives and capers? Trying them out with a chef friend of mine, in the kitchen of the restaurant where each year I hold a party for employees,î this entrepreneur tells us. Then he circulated a questionnaire to the 300 diners to get their opinions and communicated the results to Kraft Foods. "We should produce these three," he said over the phone. Then the marketing experts organized their own "scientific" tests and the results were exactly the same.

In short, science and marketing on one side, experience and irrepressible creativity on the other. And it works. ìThe secret for emerging from the crisis is ideas,î he says. Fine, but this is easier said than done. How do you decide which are good and which are bad? ìYou just act, without thinking twice. You try. You get down to work,î is his answer. Even with a touch of unscrupulousness.

That's what Dario Osella is like. Ideas are beautiful women to be courted and pursued, seizing the opportunity. Like he did during an outing with herdsmen on Monviso, discovering?"as they stopped to drink?"a source of the purest spring water. "I always take with me a kit to test for hardness, otherwise I could harm myself. I tested it and was amazed at the result. The next day I was in court to register the spring.î

And so acqua Sant'Anna was born, the brand of mineral water in which Osella has 44% ownership. ìI called this water Anna, after my wife,î he tells us. But these romantic feelings give way to the practicality of a businessman: "Did you know it's the second-most popular name for girls in Italy?" Loads of Annas?"housewives, daughters, mothers Ö and loads of bottles sold.