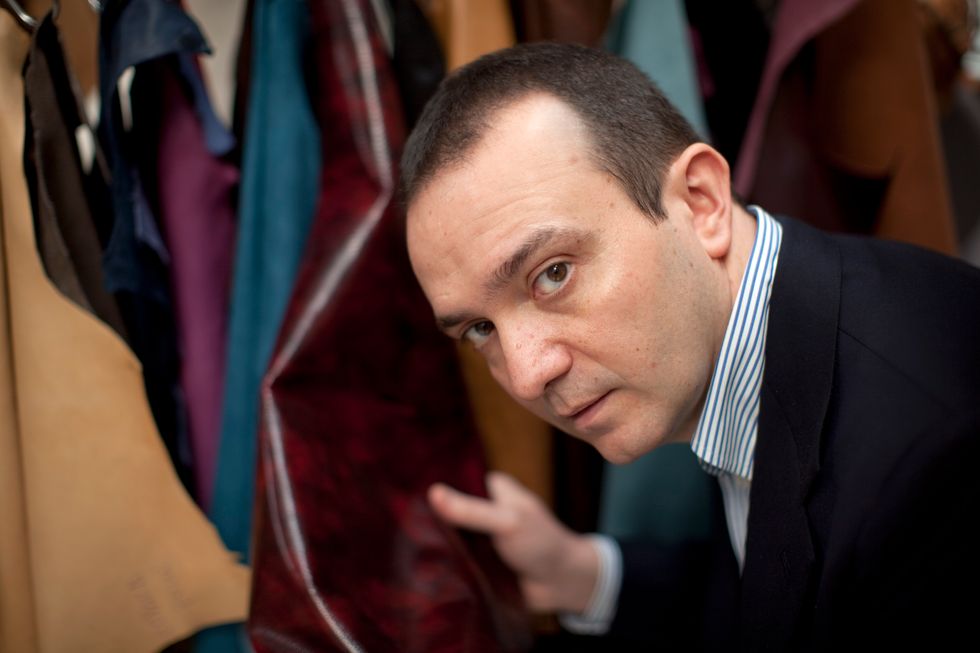 Exports are driving billings and for the first time in years, new jobs are being created. Cleto Sagripanti, president of Italian footwear manufacturers, is optimistic

Excuse me, Mr. President. How is the footwear industry doing? On a scale from one to ten. "Let's say eleven." Eleven? "Yes, of course there are always problems. But for the first time in a number of years, employment has begun to rise once again: one thousand more jobs in 2011. After many difficult years, it's a statistic that could come from China."

This is the attitude with which Cleto Sagripanti - born in 1971 and who took over the reins at ANCI (National Association of Italian Footwear Manufacturers) nine months ago - presents himself: confident because work is profitable. But first he wants to present the facts, because this success is the result of a very tough restructuring process of a sector hit by the Chinese "tsunami", plus his requests to government, business colleagues and, last but not least, the financial world.

But not to squeeze aid or special measures out of them. If anything, to indicate the road that must be taken, together, to take advantage on the markets of the "premium price" consumers are ready to pay for Made in Italy products. A road that, in terms of government, involves lower taxes and tax deductions on investment in new collections ("Our Research and Development").

In terms of Confindustria, the Italian employers' association, recognition of the autonomous and not subordinate role of footwear within the fashion industry. And, for the world of finance, a marriage between private equity and a large number of companies ("at least 200") capable of producing a leap in quality in the global economy.

Also thanks to MICAM, the leading shoe trade fair in the world organized by ANCI, deserves to be replicated around the globe, almost to sanction the fact that, as its president says, "to sell quality shoes, you have to pass through the Italian platform".

To put it succinctly, Mr. Sagripanti thinks big. The global market - from the Americas to Asia - is palpable here at the headquarters of Manas, the pocket multinational in Montecosaro (near Macerata), founded in 1956 by his grandfather Giuseppe. It is in the very air they breathe.

Starting from the posters of soap opera divas wearing Manas shoes. Not in Italy or Europe, but in Seoul, South Korea, where Manas is in its home court. "The Korean soap operas, a country where we are the brand leader, are the most widely distributed in Asia. But now our distributor, Mr. Ben, is asking me to push further afield and take our shoes to Hollywood."

So, the road to success is through celebrities. Also. But let's leave aside Manas for the moment. There is so much else to be said about the future of this key Made in Italy sector. And problems certainly are not lacking, even if, as I said, we're not whining types. Even in the wake of the tsunami.

A tsumani in Macerata?

I am talking about the invasion of products coming from countries with low labor costs which, from 2002 to 2005, despite our protests and without any sort of protection, risked wiping us off the map. During that period, the sector went from 130,000 to 80,000 employees and from 500 million pairs of shoes to 200 million. A lot of jobbers and those without strong brands just disappeared.

Compared with these numbers, an increase of one thousand jobs is peanuts.

Not really. Also because we're talking about one thousand real jobs, of people who work in manufacturing. In other words, the sector has realized that the most important thing is to defend manufacturing. Then you can go abroad, to sell and also produce. But you absolutely cannot sacrifice the chain here in Italy.

Were you able to do this?

In some areas, including The Marches, yes. In other areas, different choices were made. But it is essential to defend the entire production cycle: cutting, stitching, assembly and finishing. You know, some countries like China are improving their quality. And for us, this will be a real problem, but it will take them 15-20 years to learn the art of finishing, the touch of a craftsman that makes our shoes different from any others. We absolutely cannot lose that manual expertise.

So, for the moment, the emergency situation has been resolved.

Yes, with one exception.

The Italian market which, even if the sector exports 81% of what it produces, is still important. The drop in consumption has decidedly had an impact and the increase in VAT tax has not helped. But the real emergency involves payments. Being flexible in the face of cash flow problems of some of our store clients is a real service we provide them, given that trade has always represented our patrimony. But this situation is not sustainable over the long-term.

In Korea, the distributor has already paid 2012 orders in full. In other countries, like Russia, an advance is paid when the order is placed and the balance on delivery. In Germany, invoices are paid in 30 days.

New markets are more a necessity than a choice. But what is your strategy?

There is more than one. The Veneto region is specialized in top-end outsourcing. All the brands rely on manufacturers in Brenta. Some, like Lvmh, have bought up companies. Others, like Gucci in Tuscany, have signed programs that assure artisans who job out a certain security. Those in The Marches have made the leap into the world of brand names. If you go to Madison Avenue instead of the Ginza or Rue Saint Honoré, you'll find them all, from Pollini to Nero Giardini and others.

A picture of success - one of the few. One could ask, why give a hand to footwear manufacturers if they are doing so well? The emergencies are elsewhere. What would you respond?

The statistics show that we are demonstrating that we can create jobs and wealth. This is why we are asking to be recognized for what we are. Also because we have no illusions: things are only going to get tougher. Russia is a market that has already been exploited, and to enter strongly into countries like Brazil means getting beyond the customs duty barrier, including in collaboration with local manufacturers who support us because with our arrival, the average prices and quality of products will rise. China will be a large market, but it is also the competitor we fear most. In short, what is required is initiative, including on the "made in" front, an issue on which we are not the only ones insisting in Brussels.

In the meantime, you aren't satisfied with being considered a subsystem of the fashion sector within Confindustria. But this could work in your favor, couldn't it?

We are also asking to be represented as ANCI. We are one of the voices of small- and medium-sized companies. When the idea surfaced to close ICE (Italian Trade Commission), we were the first to protest. OK, maybe it needs to be reformed, but what can small businessmen who go to New York or Tokyo do without ICE? The first time they need space to show their merchandise and someone to recommend a lawyer to protect their interests when the time comes to choose a distributor. Small companies do go abroad, absolutely. But then they need a leap in quality. Action on a national level. Around customs duties, for example.

Lobbies are useful, including on the domestic market. What will you be asking for in Parliament?

I think urgent action is required on the tax wedge. Not so I'll make more money, but to give to employees. If we want to have a future, our sector must defend the manual skill of our artisans. Plus, a look must be taken at the criteria for tax exemption.

Let's be frank. R&D in our sector involves the costs connected with the need to develop a collection every two months. Investment into designers, rather than the work of pattern makers. This is where company research activity must be stimulated. Not in the invention of new products or research into materials.

So this pertains to government. But perhaps the most important question in coming months involves the financial sector. Is this true?

Let's start with the statistics. The sector is healthy. I could name many companies with an EBITDA of around 15-20%, without debts. Let's say that there are many companies with between 15 and 40 million euros in billings who are in a position to make a leap in quality.

What do you mean by this?

Cultivate the development of the brand, focus on solid distribution agreements within markets and invest in styling and marketing. Last but not least, develop a business culture. To do all this requires a financial partner capable of creating and sharing a business plan. It's not about promising the moon or squeezing the last drop out of a company, as happened in the past. There are businessmen who have shown that they can make the necessary sacrifices by investing their cash in the company and also have the vision required to share decision-making with a professional minority partner. I believe that our sector holds tremendous opportunities for private equity.

We're ready to make the leap in quality.