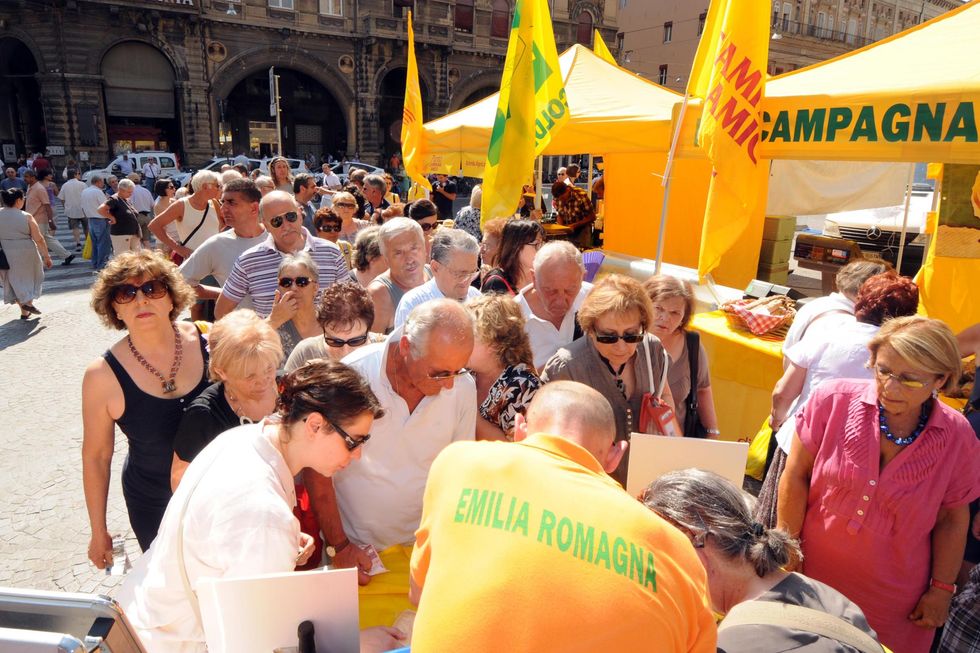 The soccer metaphor perfectly describes the Italian national character: that of a country that finds union and solidarity in adversity, but also the right spirit to make a surprise comeback. Because a feature of our collective Dna is the victory-of-the-underdog gene.

The Italy that wants to win appears during the direst emergency.

The most optimistic picture that stays in our eyes has a pile of rubble in the background.

After the earthquake, when the people of Finale Emilia in Modena province were living in tents, they threw a picnic to exorcise the disaster, with plenty of salami and Lambrusco.

The Italy that wants to win puts on a brave front. That's the statement those earthquake victims made with their picnic, and if there is a lesson to be learned from this tragedy it is that the Italians (great people, maybe pretty shrewd but definitely Italian) know how to start over again when all is lost.

Even the national soccer team was about to win in Kiev, second at the European championships, and came that close to winning despite leaving behind it the worst season ever, an entire horrible year of scandals and embarrassment.

The match between Italy and Germany was an emergency, that's why the team won. Beating the Germans meant teaching a lesson to those who had been trying to teach us manners, how to balance our national budget and how to read the classics of literature.

The Germans are tough, but the Italians know how to make soup out of the toughest cuts.

Only he who hesitates is lost. Solidarity, hard work and a creative spirit.

We have the victory-of-the-underdog gene in our Dna.

There is Marco Pannella, to take an example in politics, who wins every time he loses.

Mino Martinazzoli, the last secretary of the Christian Democrats, called to save the cross-and-shield party, is celebrated as a victorious leader for having dissolved the party he was supposed to save.

He led his party into the bitterest defeat, but made that suicide his banner.

Italy shows its best side, in its version of the great dust-up, in the supermarkets and Autogrill outlets, encouraging the customers to buy pieces of Grana Padano and Parmigiano Reggiano cheese as soon as it is dug out of the rubble of the earthquake.

It's not charity, but a real political project.

The factories came tumbling down and the Italy that wants to win rolls its sleeves up and gets back to work.

Certainly, comparison with other tragedies is important, and the memory of the Belice earthquake comes to mind, though it took place a long time ago, in the night between 14 and 15 January 1968: it is still mired in political and mafia mismanagement and graft, however even in that case and in other cases of major earth "shake-ups" (we could add the Irpinia earthquake on 23 November 1980) these events, however, undoubtedly produce wealth.

The emergency in northern Italy, and the example of Emilia is admirable for the way it brought out real team spirit.

In the south, in the past, earthquake equaled corruption. The businessman Francesco De Vito Piscicelli (everyone in Italy remembers this story, unfortunately) at 3:30 a.m. on 6 April 2009, when he learned of the earthquake in Abruzzo «laughed in bed».

The south, when struck by earthquake, therefore, does not rebuild.

However some people do benefit from the situation. According to the parameters of underdevelopment, obviously.

Money circulates but every obstacle is good for someone, and the cynical, brash, cruel Italy of daily life conceals a secret resource: the individuality of those who know how, where and when to make us succeed in doing the right thing.

The Italians in the world are one of the most admired peoples for the genius of their craftsmanship, handiwork and taste.

It is not just the tailoring of the fashion brands that never fails to grab space in the international showcase, not only the wonderful food and wines; the most substantial episode is the one about the Venetian company Rubelli, which produced a piece of work of superior quality: 12,000 meters of fabric made in Cucciago (Como) for the Bolshoi Theater (after La Scala and La Fenice).

The Italy that the world knows is that of the opera libretto and scores, which have spread to Moscow in the continuity of a tradition that is noble, but forced to walk on the legs of the economy.

And that is how the Italy that gives its best came to be responsible for decorating the boxes, the lateral columns, the balustrades and, above all, installation of the curtain.

The theater reopened to the public on 28 October 2011, revealing on its stage the mastery of Italian craftsmen: precious decorations made with as much as 500 kilos of gold thread for damask, lampas, brocade and velvet.

All of it is the work of skilled Italian hands, capable of drawing the Czar's two-headed eagle, St. George with the dragon and the Cyrillic lettering of the most sentimental word in the world: Russia.

The Italy that wants to win is that of the genius who builds a team to beat the emergency. All the «pap» of which the official histories are filled is mere rhetoric.

All the flourish of metaphors that we could also read and hear during the European soccer championships reveals an oddity shared by those who have no identity: the Greeks against the Trojans, the Roman legions against England, the Germany of sauerkraut against spaghetti. «Stray dogs», to quote the German commentators.

The Italy that wants to win knows very well that it does not have political sovereignty. The economic crisis that knocks on the doors of so many families is generated by numbers that are too abstruse for understanding.

There are even black market operations on the outskirts of some cities. Around Caserta gasoline is already being sold under the counter, as if we were in a postwar period without necessarily having been through the war.

The Italy that wants to win derives its strength from the creativity of individuals, held together by the emergency.

And the survival instinct may not generate greatness, but can foster something very like it. All we do is turn defeats into victories.

Playing against Spain was not an emergency - just a match. That's why we lost: because we're washouts. But no one will remember that we lost 4 to 0, humiliated as never before, though they'll always remember our win against Germany: 2 to 1. With the skill of stray dogs, obviously.