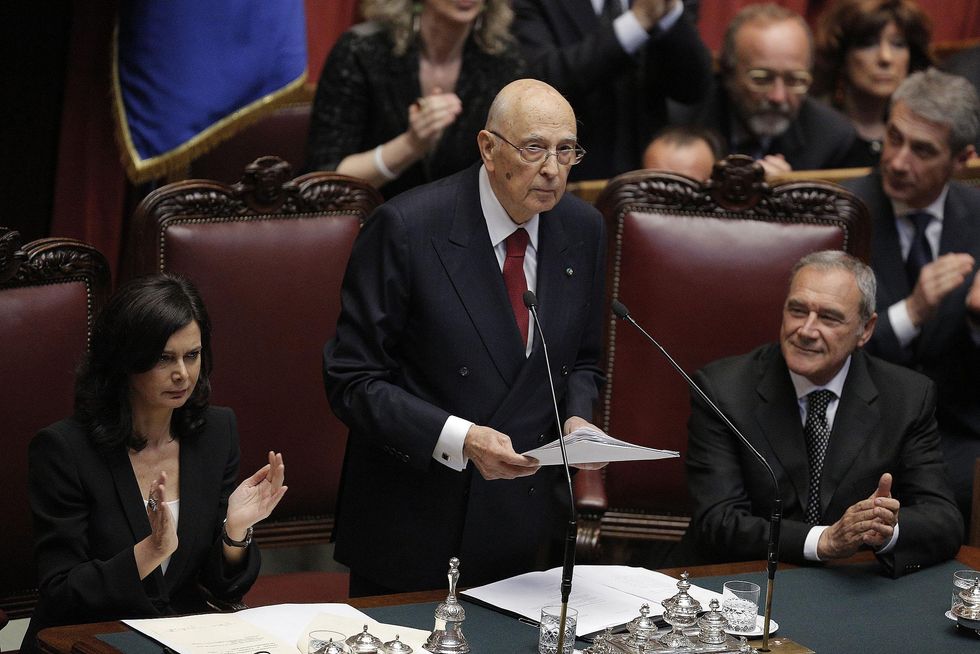 What will Italy's re-elected president do?

According to President Napolitano the only feasible solution to form a government is to create a “broad consensus among the parties, including majority and opposition, to provide a shared answer to problems of common institutional responsibility"

As I write this article, Italian parties are meeting the new President, Giorgio Napolitano, in the consultation that will lead to the formation of the government. In his exceptional inaugural speech for his new mandate, Napolitano could not make clearer what the parties are expected to do now: "on the bases of the electoral results, there is no party or coalition which has managed to get enough votes to govern alone".

Thus, the only feasible solution to form a government is to create a "broad consensus among the parties, including majority and opposition, to provide a shared answer to problems of common institutional responsibility".

The President has taken full strength from the broad parliamentary majority that re-elected him on Saturday. The outcome of the consultations is thus likely to be a 'government of the President' working on a number of clearly specified issues (the reform of the electoral law, legislation to tackle the economic and social crisis...) which were pre-prepared by ten "wise-men" named by Napolitano - before his re-election - after the first round of consultations to form a government did not produce any result.

Indeed, the three largest parties in the Italian parliament - Berlusconi's PDL, Monti's Civic Choice and even the deeply divided Democratic Party - all agree that a 'grand coalition' is now needed. The Northern League has taken a more cautious position, while open opposition comes from the more fringe parties, including Beppe Grillo's Five Stars Movement.

Still, there are a number of open issues which could undermine the strength and the capacity of the new government to act. The foremost one is the Democratic Party. While the Democrats were at last able to converge on his name, a new divide within the party could emerge on the new head of government.

Among the names currently on the table, both the Vice-Secretary Letta and the major of Florence Renzi produced some moans within the party. Most important, however, is the fact that the formation of a broad coalition with Silvio Berlusconi - the traditional "enemy" - is hard to accept by some of the party leaders and by many in the party's electoral base. Competitors at the left of the Democrats - Vendola's Left and Freedom - and Grillo's Movement are eager to electorally profit from the alliance with Berlusconi. Anyway, the absence of both a leader and a strategy make the available alternative - calling new elections - strongly unattractive for the Democrats.

While the Italian political system is now dominated by the figure of 'King' Giorgio Napolitano, the presidential elections have also considerably strengthened Berlusconi's party, and Berlusconi himself. His sober institutional profile, the cohesion of both his party and his coalition in all election rounds and his convinced support for Napolitano have consolidated his leadership. The polls already indicate that Italian voters appreciate the new course of action. After all, in the most anti-Berlusconi of all legislatures, the winner might, once more, be the never-ending leader of the centre-right.