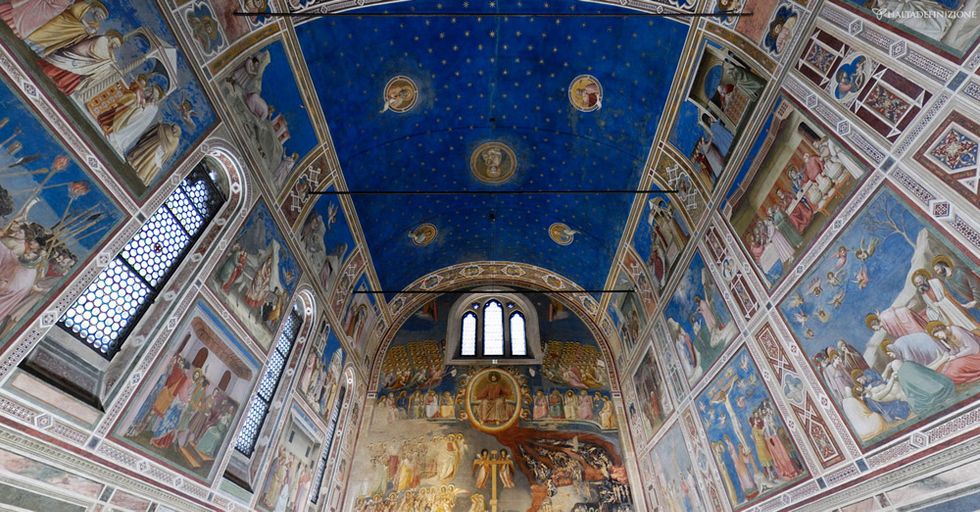 Who’s out to kill Giotto

An auditorium, a skyscraper and a parking lot are threatening the Cappella degli Scrovegni. With the tacit agreement of city administrators and intellectuals

A city overrun by barbarians. Hardly surprising. Architects can't even keep their hands off Venice, let alone Padua. So, many years ago, I began the attack and in the wake of a referendum, we were able to defeat the "advance party", an all-steel structure that mimicked and surpassed the shape of its neighboring Basilica degli Eremitani. Once this monstrous assault had been driven back, they felt it necessary to initiate another competition to fill a space that is perfectly fine empty. But the torment didn't stop there, and now, in one of the most extraordinary spaces in the world, Prato della Valle, they have come up with something new and perverse, the design and realization of a shuttle train with above-ground stations. And it will be difficult to avoid it, despite the protests of thousands of city residents. But there's more. Now, right in the city center, a monument to who knows what (a highly-noble cause, naturally) by architect Daniel Libeskind. A sort of windscreen in steel and glass whose symbolic meaning is hard to grasp.

The designated victim was now surrounded. In fact, in the middle of these horrors is the Cappella degli Scrovegni with its frescoes by Giotto. Apparently spared until now, it actually was under attack, given that in the name of some hazy preservation concept, acting as the only entrance, a diabolical, pulmonary device has been tacked on to purify visitors and limit their access. A ridiculous gimmick that has permanently closed the main entrance, covered the floor with a pedestrian walkway and has failed to offer any additional protection for the frescoes. Probably all they would have needed to do was paint the outside walls of the chapel to protect the brickwork?"an idea not complicated or costly enough to warrant consideration.

Once the chapel had been breached, it had to be worn down. And, with so much space in the old city center, what a great idea to create an underground parking lot near the chapel with an eye-sore of a concrete structure the result of the excavation that has changed how the earth absorbs rainwater.

But even this was not enough. A new auditorium needed to be built to "fill the void", less than 200 meters from the chapel. Where else to build an auditorium than right there? Could there be anything better than Giotto in Padua?

Yet even that was not enough. For those visiting the city, a 104 meter skyscraper was also deemed necessary. But, in any case, less-serious than the construction of the auditorium whose water table is connected to that of the chapel.

Through all this, the city sleeps. But a group of intellectuals, convinced that Giotto is a gift Padua does not appreciate as it should, has signed a petition. But not to ask, as would seem logical, that the project (probably already approved by the local administration and cultural heritage preservation authorities) be abandoned, but more timidly to "implement major earthworks" below the chapel. Along with the impassioned scholar Chiara Frugoni, many would appear to have signed the appeal, including American Keith Christiansen and Tomaso Montanari, Salvatore Settis and even the modest Alessandra Mottola Molfino and insubstantial Franco Miracco.