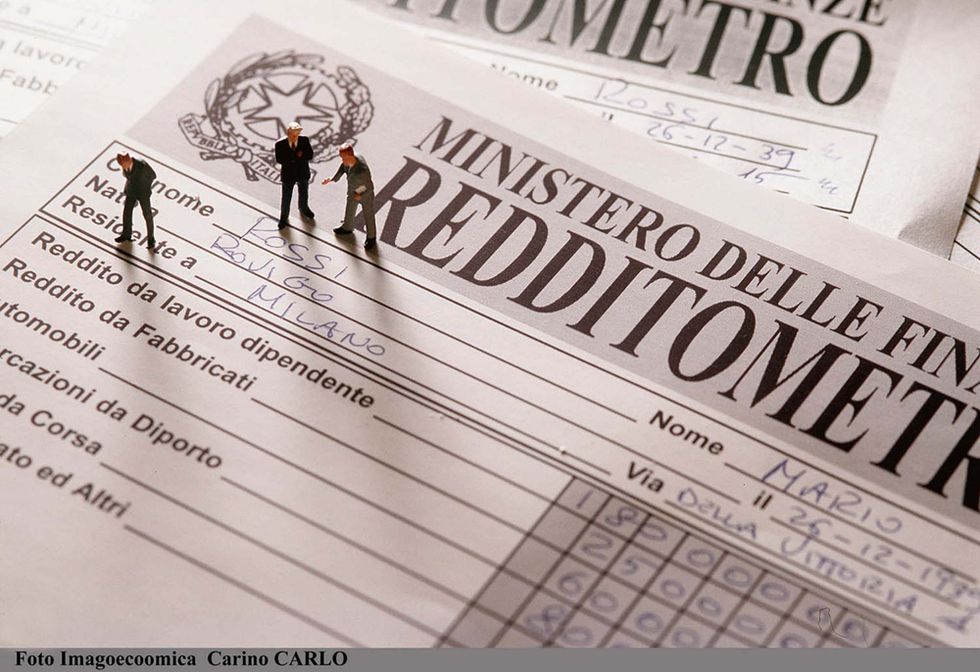 The tax meter of italian families

Virtually all of our daily activities involve paying something to the government, from filling up the gas tank to medical expenditures, we are plagued by taxes, excise duties and hidden additional costs. The Dainese family has calculated them all. The result: an extra 6,000 euros

Nicola Dainese works in a bank and earns about 2,800 euros net per month. His wife gave up work to take care of their two daughters, one in elementary school and the other in junior high. At the end of 2012, the gross income of this Padua family was over 44,000 euros. But before IRPEF (personal income tax), which after deductions was 12,000 euros.

Pay and forget? If only! The battle between the taxman and taxpayers is not just a jockeying for position in an open field that is settled with the peace treaty in the form of the tax return. No. Starting the very next day, the Italian government continues fighting another hidden war filled with booby traps and unjust taxes scattered everywhere. Just open your eyes, turn over in bed and turn on the light, and you've already begun to pay.

And it continues in every little, unconscious aspect of daily life, including for your children. At the end of the day, as seen in the accompanying tables, the government dips into the pockets of its citizens and extracts much more money than it might seem.

For example, the case of the Dainese family from Padua which allowed Panorama to examine all its expenditures in detail. The alarm clock rings, on with the light on the nightstand and the first tax appears: out of the 750 euros annually for electricity, 231 go for VAT and additional local taxes. Nearly one-third. In the meantime, the building heat has already gone on: the two items together total an additional 400 euros in VAT over 12 months. Nicola, Isabella and their daughters Anna and Chiara sit down at the kitchen table for breakfast. Heating the milk on the stove burns another 125 euros in VAT and additional local taxes. The same story for the beverage dissolved in their cups, the water running from the tap and every last crumb of their breakfast.

OK, time to get moving. Everyone in the car, Nicola to get to work, while Isabella takes the girls to school. Car insurance is mandatory: out of 856 euros, 107 are for taxes. Another 450 euros in road tax (100% tax). Then there's gas, and here the government gets the lion's share: 2,200 euros in a year, of which about 1,500 is for VAT and duties. VAT, value added tax, the girls will learn about in high school. But, in the meantime, it's already with them in the classroom, on their desks and hidden in their textbooks and notebooks.

Anna and Chiara do not have mobile phones, a decision of their parents for educational, not economic, reasons. But the family also does its duty in this area: 110 euros in VAT and government license out of a total telephone bill of 280 euros. The same taxes paid for an Internet account in order to search the web or send an e-mail to friends from the computer at home. Where a hacking cough strikes terror because every time a doctor's bill is paid or even an aspirin is swallowed, not only the active ingredients, but also others, are covered by VAT and local taxes.

In all, between IMU (property tax), road and other taxes, for the Dainese family in Padua, it all totals 18,000 euros per year. Fifty percent more than for income tax. A millstone that transforms what should be an economically and socially upper-middle class family into one that gets by, cutting all the small, unnecessary expenditures in order to make it to the end of the month. The picture offered by the most recent official ISTAT statistics confirms the results of our "case history": the buying power of families dropped by 4.8 percent over 2012.

Nicola Dainese is 44. He started working at the bank in 1989 at a salary of 1,700,000 lire. At the time, a lot. Combined with what his wife earned as a computer programmer, they had a high standard of living. Nicola bought a flashy Audi, his wife a car to get around in and together they took out a mortgage and bought a house. Their expectations for the future were excellent. In the summer, they took a three-week vacation at the sea and in the winter another 10 days in snowy Alto Adige. Then Chiara arrived on May 4, 2000, early for the 1,000 euro bonus for the first child planned that year for October. Anna was also born in natural childbirth on May 4, but in 2003. Mother Isabella switched to part-time, then decided to leave work altogether to take care of the girls.

With time, in the parking space in front of the house, the Audi has been replaced by a used Passat station wagon. Winter vacations are a thing of the past and in the summer, just two weeks and no longer in a hotel, but in a campground cabin. They cut costs wherever possible, including off-peak electricity use and special offers every Thursday at the local supermarket. Plus a small ethical purchasing group to stock up on oil and Sicilian oranges once a year. Chiara used to study ballet, where the recital alone cost 200 euros. Reluctantly, her parents helped her discover her innate talent for the less-expensive rhythmic gymnastics.

Also because, in the meantime, all those non-permanent items, such as the productivity bonus, which in the past made a difference, have disappeared from Nicola's paycheck. Because in war, for the weaker side, it's either retreat or die.