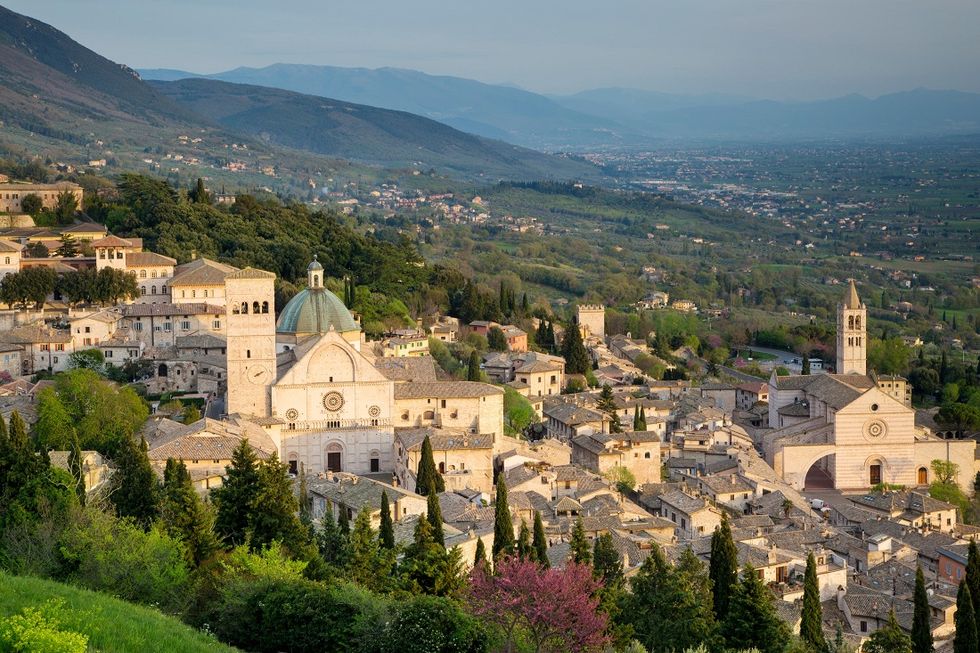 The secrets of Umbria's cuisine

Salami, ham, porchetta, truffles, pasta and chocolate among its treasures

Umbria is not only the green heart of Italy, the cradle of the Franciscan tradition, and the setting for beautiful medieval towns. It is also like a jewellery box which holds, alongside marvellous artistic, religious and cultural treasures, an incredible heritage of aromas and flavours.

In this region it is not unusual to enter a restaurant, perhaps with tables outside under a wisteria pergola, and see meat cooked in the same way as it was eight centuries ago: a hearth in the middle of the room, burning charcoal, roasting spits, and the sizzling of meat over fire.

Some cities in Umbria are real "sanctuaries" of gastronomy. Norcia is recognized as the birthplace of Italian salami and ham production. Bastia Umbria is considered one of the home of porchetta, a whole small pig spit roasted and flavoured with herbs and spices.

When visiting Umbria, and above all the valleys, with their rolling landscapes of green hills, pink rocks and small towns, you will discover how the region has always been involved in heated rivalry with anther region of Italy, Piedmont. The bone of contention is the truffle. Umbria, in fact, is home to a variety if the fragrant "tuber" called the black truffle of Norcia.

A good lunch in Umbria can't be considered complete without tasting one of the region's traditional pasta dishes. These include ciriole, which are tagliatelle sautéed with oil and garlic or meat ragù; spaghetti, served with bacon and marjoram or anchovies  and black truffles; maccheroni, here known as strascinati, with sausage, egg and cheese; and embrici, small homemade spaghetti, served with tomatoes, garlic and abundant pecorino sheep's cheese.

Umbria also has a rich tradition of cakes and sweets. In Perugia, chocolate enjoys cult status, and traditional cooking also offers a range of extraordinary delights such as pignoccate, with pine nuts and sugar, serpentone, a snake-shaped sweet bread with almonds, and panpepato, which marries the flavour of honey with that of pepper and other spices.