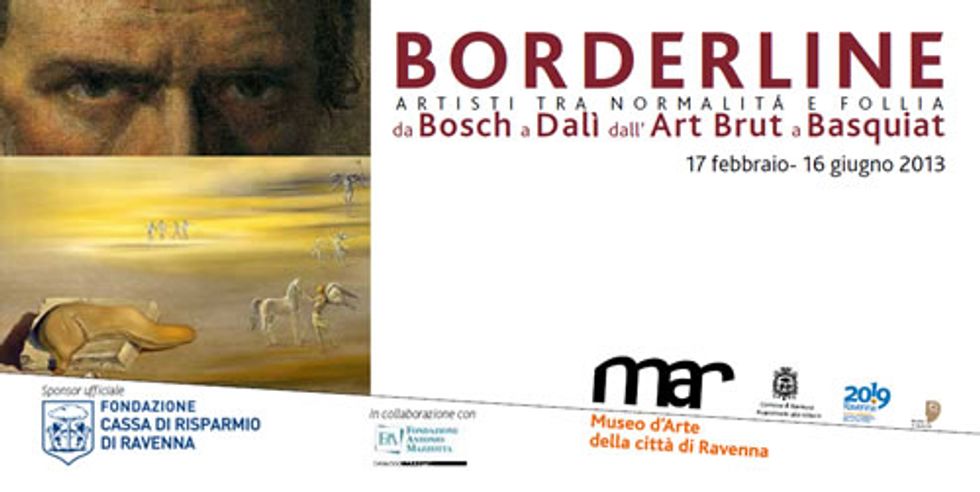 From February 17 to June 16, 2013, MAR, the Art Museum of Ravenna, in the Emilia Romagna region, will present "Borderline"exhibition, aimed at going beyond the limits that have up to now defined the fenced area of Art Brut and that of the "insane artists."

The ambitious project of the Mar exhibition has the purpose of exploring the undefined boundaries of artistic experience, beyond the traditional categories fixed in the XX century, identifying  creativity as a borders in motion area, where the officially recognized artists as well as those  considered "insane",  called "outsiders" in the 70s, can be represented.

Avantgarde culture protagonists and innovative psychiatrists already started in the XX century to examine artistic expressions produced by patients in mental treatment centers, re-evaluating them both as creativity sources and as a different way of expressing human existence.

The exhibition "Borderline, artists between normality and insanity, from Bosch to Dalì, from  Art Brut to Basquiat"  has been curated by the scientific director of the museum Claudio Spadoni, psychiatrist and psychotherapist Giorgio Bedoni and  Brera Academy professor and Gabriele Mazzotta.

The exhibition is organized into several thematic sections and presents works, among the Others of, Francisco Goya and Jean-Michel Basquiat.