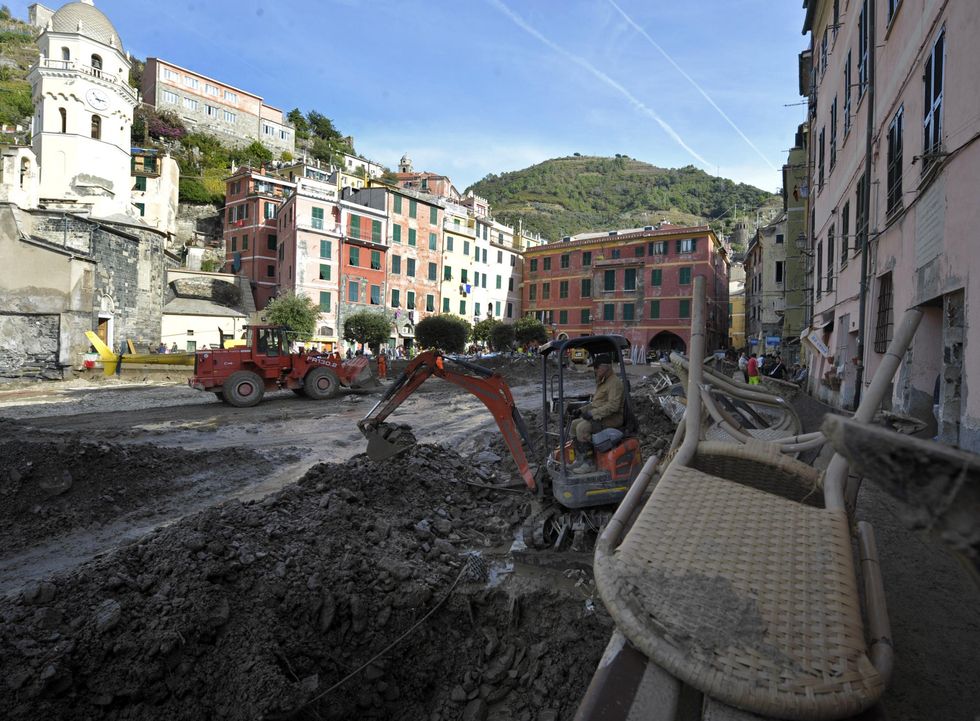 The rebirth of Cinque Terre, in the Liguria region

The flooding of the Cinque Terre established one thing: the worth of its young people

Twenty boys and girls in a semi-circle, all in white shirts playing the Italian national anthem on trumpets. Behind them, their rebuilt school and, facing them, a minister and senator of the Italian republic.

The perfect synthesis of the Cinque Terre today, a year after the flood that brought with it death and destruction to one of the most beautiful landscapes in the world.

We are in Monterosso, one of the worst-hit towns. Francesco is 9 years old in sneakers, jeans, dark jacket and polo shirt with his short hair slicked back with styling gel. A sunny morning in early October and Francesco goes into the main square to meet Education Minister Profumo - also named Francesco - and his local member of Parliament, Luigi Grillo.

He greets them, proudly, without a trace of embarrassment. He plays the host and guides his guests towards his school, the Enrico Fermi Elementary  School. The building, damaged by the landslide, opened in time for the new school year. Promises were kept. The government's reputation was riding on it.

Francesco is in fifth grade. He says he is "very cheerful, lively and a chatterbox". He plays soccer, but prefers karate because it builds up his muscles. He absolutely loves lasagna.

His favorite TV programs are Coloradoand Scherzi a Parte (a type of candid camera). His favorite soccer player is Thiago Silva, center-back for the Milan soccer team who was traded to Paris Saint-Germain.

His friends are Gianluca, Alessandro and Marta and when he's big he wants to be a wrestler, like Big Show. When he was little he wanted to marry his mom and every year for her birthday he gives her a bouquet of roses. Francesco roots for Genoa, but also Cagliari and Milan - his dad's teams. Francesco's father is the hero of Monterosso, Sandro Usai, the Civil Defense volunteer who died while trying to save some tourists.

Today, the traces of the disaster are no longer visible. The only tangible signs of what happened are two photographs of the tragedy attached to the walls at the entrance to the town, with the date October 25, 2011. Otherwise, nothing.

Everything is new with festive garlands. Like Maurizio Fioravanti's photography studio where his father risked being entrapped. His name is Silvano, he is 74 years old and looked death squarely in the face. The water was up to his neck and the only escape route was through a window more than a yard above the ground and just slightly bigger than a porthole, but with a grate over it from the outside.

Silvano ripped a shelf from the wall and, with the strength of desperation, opened up a path to escape. He was stuck up on the roof for a long time, then they took him in on the second floor of a neighboring hotel where he spent the night. Right after, he seemed fine, but three months later he collapsed. Sleepless nights, body stiffness, a heart attack.

Today he is a bit calmer and he takes his wife to the nearby Al Pozzo restaurant owned by his friend Gino Barilari who has mouth-watering gnocchetti with shrimp waiting for them. Gino holds an important "first": he was the first to re-open on February 29th.

But everyone else soon followed, opening before the start of the summer season. Senator Grillo is from Monterosso. "The sheer willpower of these people made the difference. No one has yet received a single euro from the government. They went into debt to fix everything and start again. Government funding was used to cover emergency expenses."

Gino Barilari had to start from zero: stove, refrigerators, floors, bathrooms, electrical system and plumbing. In his restaurant, mixed in with the debris, he found two motorcycles with helmets attached, the trunk of an olive tree more than 6 feet tall, roots and all, plus two lemon trees, olive trees, a cot, two couches, a lot of chairs, plastic objects of every shape and form, copper, iron and nylon stockings.

A mire that on that October day one year ago, Walter Filattiera - 49, from the Val di Vara above the Cinque Terre, the area that saw the highest number of deaths and damage - navigated up and down in continuation. Walter has a rafting center and, when he saw how things were going, he called two of his guys and they set out in canoes.

For hours they helped firemen and police, saving the life of a foreign truck driver and going door-to-door in the town ofBrugnatoto help people get out. They were christened "River angels".

The mayor of Vernazza is also an angel, but of the nursery school. When we arrive at his office in the town hall to interview him, the door is wide open and the office empty. Vincenzo Rezasco is at the top of the stairs, standing in the doorway that looks out onto the courtyard of the nursery school. For the last hour, he has been trying to convince a child to go back into the schoolroom.

The mayor says it is the son of a friend of his and that the child had successfully completed orientation, but who knows what got into him this morning. Rezasco accompanies us into his office, but asks us to wait a moment and goes back out to do battle with the little rebel.

Mayor Rezasco, 62, got his degree in modern literature from the University of Pisa in 1974. For two years he worked as a fisherman and then taught for five years at the high school in Sarzana. But, at 31, still without tenure and about to marry, he applied for a job with the railway and packed in the school.

Vernazza has a population of 550 according to the 2012 census and three of them were lost in the flood that brought75,000 cubic metersof water and slime to its main street. They had to re-do the sewers and aqueducts, and any day now the methane gas lines should be hooked up once again.

The situation is getting back to normal. The river will be allowed to keep what it has taken, which means that no attempt will be made to change the natural course of the water, just to contain the risk of new landslides. Funding has arrived to the tune of 6-7 million euros in the face of damage estimated to amount to about 20 million.

Mayor Rezasco says no one should worry because under normal conditions there's no danger, and even in special situations the Civil Defense has a plan.

However, the flooding of the Cinque Terre did establish one thing: the worth of its young people.

Hardly lazy, weak good-for-nothings the way some characterize the younger generation, hundreds of young people arrived from all over Liguria and Italy. They rolled up their sleeves and began to dig.

Like Chiara, 22, born in Vernazza but studying in Milan. She returned immediately and a year later is still there to lend a hand. In the meantime, on February 28, she got her degree from the Milan Polytechnic in design and fashion and, after having helped to clean up the town, during the summer she worked as a waitress in a bar, together with Gianmarco, just graduated from Bocconi University. The future? Chiara just hopes not to end up like her fellow-citizen, Marco Fenelli, biologist who now works as a mailman in Vernazza.