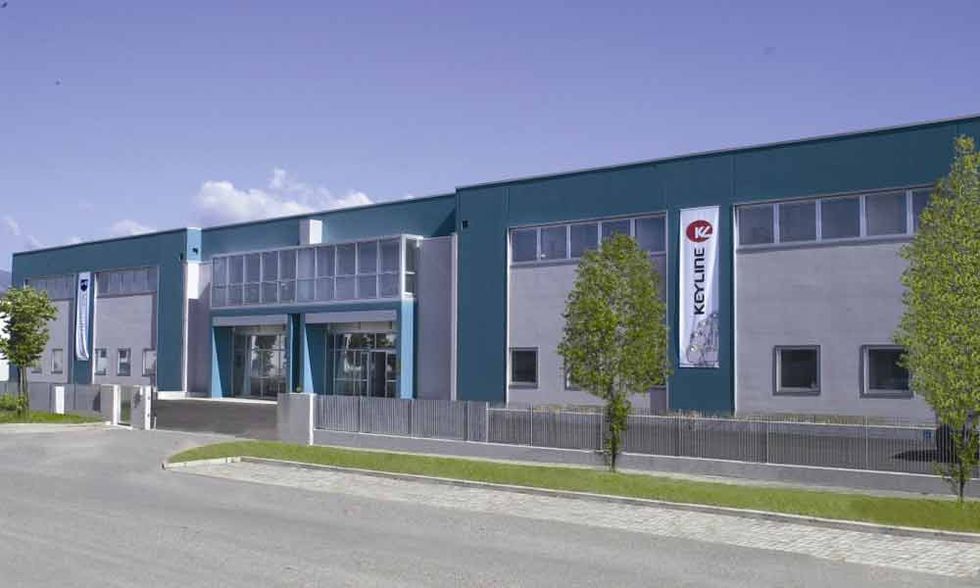 Keyline duplicates the keys of success

A centuries-old tradition meets technology. That is what Massimo Bianchi, the sixth generation of a family based in the Veneto Region, has done with locks. Now his Keyline has become a world leader and aims to conquer foreign markets.

From wrought iron to a microchip, the gap is not so great. Especially in the Veneto Region, where tradition and technology often go hand in hand. A good example is Keyline, a company based in Conegliano (Treviso) which designs and produces keys, mechanical and electronic key duplicating machines, and is a world leader in the technology of car keys equipped with transponder.

It started out as a simple craftsman's workshop for making wrought iron keys, founded at Cibiana di Cadore by Prospero Bianchi at the end of the 18th century. A pioneer in his business, the founder of the Bianchi dynasty started a tradition handed down from father to son for six generations to our own time, and the little workshop grew over the years into a full-fledged industry, with an eye on the technological developments in the sector. For example, Camillo Bianchi, the fifth generation, created a system in the Fifties for instant duplication of keys that spread all over the world and led him in 1974 to found a large company in the sector, called Silca, Società italiana lavorazione chiavi ed affini (Italian Company for Keys and Similar Devices). Three decades later, the business came down to his son Massimo, 51, who in 1988 invented the first electronic duplicator capable of applying the enormous potentials of information technology and numerical control to the sector of keys and their production. This invention, following the development of mechatronics, gave Silca access to the international market, also thanks to its merger with the Canadian group Unican, of which Massimo Bianchi became vice-president, and the subsequent merger in 2001 of this company with the Swiss group Kaba.

Then the Third Millennium began and the sixth heir of the Bianchi family, after leaving the multinational company where he sat on the executive board, went back to being an entrepreneur and in 2002 acquired Keyline, which became part of Gruppo Bianchi 1770 (with a turnover of 35 million euros in 2010, expected to grow to 40 million in 2011). It is the strategic and technological fulcrum in the production of any type of key and the design and production of duplicating machines (4,000 key models in the catalogue), without abandoning the centuries-old tradition of a business linked to a universally known and (still) irreplaceable product.

From a small company, little more than a workshop, with a turnover of 4 million euros in 2005, Keyline has grown, in just three years, by double-digit leaps, into a medium-sized business employing 80 workers - the entire group employs 200, including two other companies, one for molding plastic and one in Germany producing parts for furniture - capable of building a brand that is now known everywhere in the world. «We are moving away from metal keys and have completely incorporated the high technology for products designed for the automobile sector, which will soon be transferred to residential keys as well» Massimo Bianchi, chairman and managing director of Keyline, explains to Panorama Economy. The company ended 2010 with turnover up 10% compared with 2009, at 13.5 million euros, and the EBITDA up by 12%.

These are large figures, and the figure for exports is even larger: 72% of the entire production, of which 39% is going to markets outside of Europe, from the U.S. (where the company has initialed important partnerships with the main groups in the sector of automobile parts), to South East Asia and the Far East. It's still full speed ahead for Keyline: the company ended the first quarter of 2011 with an increase of 20% in its business compared to last year and, although April showed a slight reduction in the number of orders, in May the portfolio was already full.

The growth plan foresees investments in the electronic sector, with joint ventures or small acquisitions, mainly in Italy. Another strong point is the activity of research and development, which employs six electronic and mechanical engineers and in which Keyline invests over 5% of its turnover every year. The goal is to continue to increase the turnover, especially abroad. «The Italian market is a little backward in the security sector, while they are more active abroad. There has been a big drop in the U.S. in the last three years as a consequence of the elimination of many concessionaires by General Motors, but the survivors are also working for the ones that have been closed. And we are concentrating our business on fewer clients but with a stronger orientation toward investment, willing to spend to provide themselves with the best equipment on the market. We are developing a new product and we are the company that has adapted best to the particular needs of that market. We also have a potential new contract that we hope to close in a short time, and that will bring us new production volumes».

The company also has South America and China in its sights, and it recently opened a sales branch in Shanghai. «But we will keep production in Italy where we have the high technology at hand. In Veneto, Lombardy and Piedmont we have everything we need» concludes Bianchi.