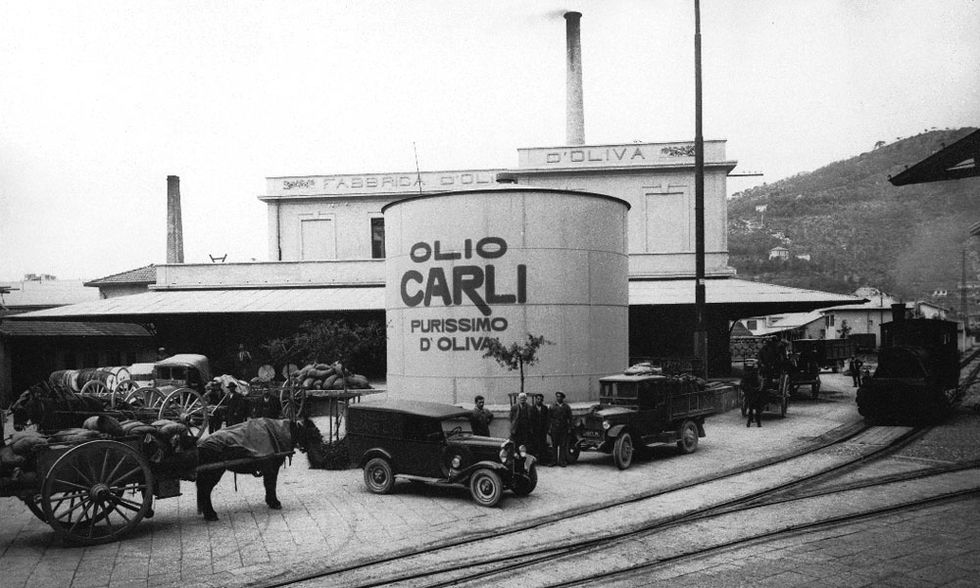 Giovanni Carli must have been hard-headed and intractable. While everyone else sold their excess oil to wholesalers, he wanted to sell it directly to families. And even if no one followed his lead, he continued straight along his own path, never once looking back.

A hundred years ago, production was particularly good and so he took his bicycle (which the company still has) and started knocking on the doors of homes in towns around Oneglia to sell his oil. Then he bought a motorcycle and crossed the Alps into lower Piedmont, armed with only a notebook to write down the orders and a few bottles for tasting. Once back home, he shipped off the crates of oil by train. He was the only one to do so 100 years ago and the company he founded is still the only one--at least among companies of a certain size--to do so today.

Giovanni liked ideas that were different. He had an olive grove and a printing business and, given how the oil business was going, anyone else would have sold off the other. But not Giovanni. He kept it. And today, not only is the printing plant still part of the company's facilities, but it has become of fundamental importance for printing pamphlets and advertising material, employing ten people on two shifts.

A simple business model (at least on paper) and a sense of consistency which seems a lot like stubbornness are still the basis of the company. Never in shops or supermarkets, was the motto of his grandfather, and grandson Gian Franco repeats the same thing, confessing: «They may have asked us, but we never even considered it. We're happy the way we are». The only significant changes in 100 years of the company's history are the size of its production facilities, which have grown from a very small warehouse in the center of Oneglia to its current headquarters near the station, and the method used to make deliveries. At the beginning, they shipped by train, later switching to mail.

Since 1968, Carli has used a network of 130 privately-owned courier services which deliver the bottles of oil to customers' homes. «In a year, we ship one million small packages and it is a huge job to take the orders, sort them, prepare the packages and ship them throughout Italy and abroad, especially to France, Germany and the UK, but even to the United States», Carli explains. «Seventy percent of the orders are made by telephone and, despite our advertising, new clients come to us thanks to word-of-mouth and customer satisfaction with the product. This is why quality is fundamental. We no longer have grandfather's old olive grove. But we have bought others from which we produce our Ligurian DOP oil and expertise in oil-making is in our bones. It is our inheritance and education of taste; it is the incentive for me and my family. The fourth generation is already working in the firm, tasting the batches of oil and personally selecting only what we consider to be the best».